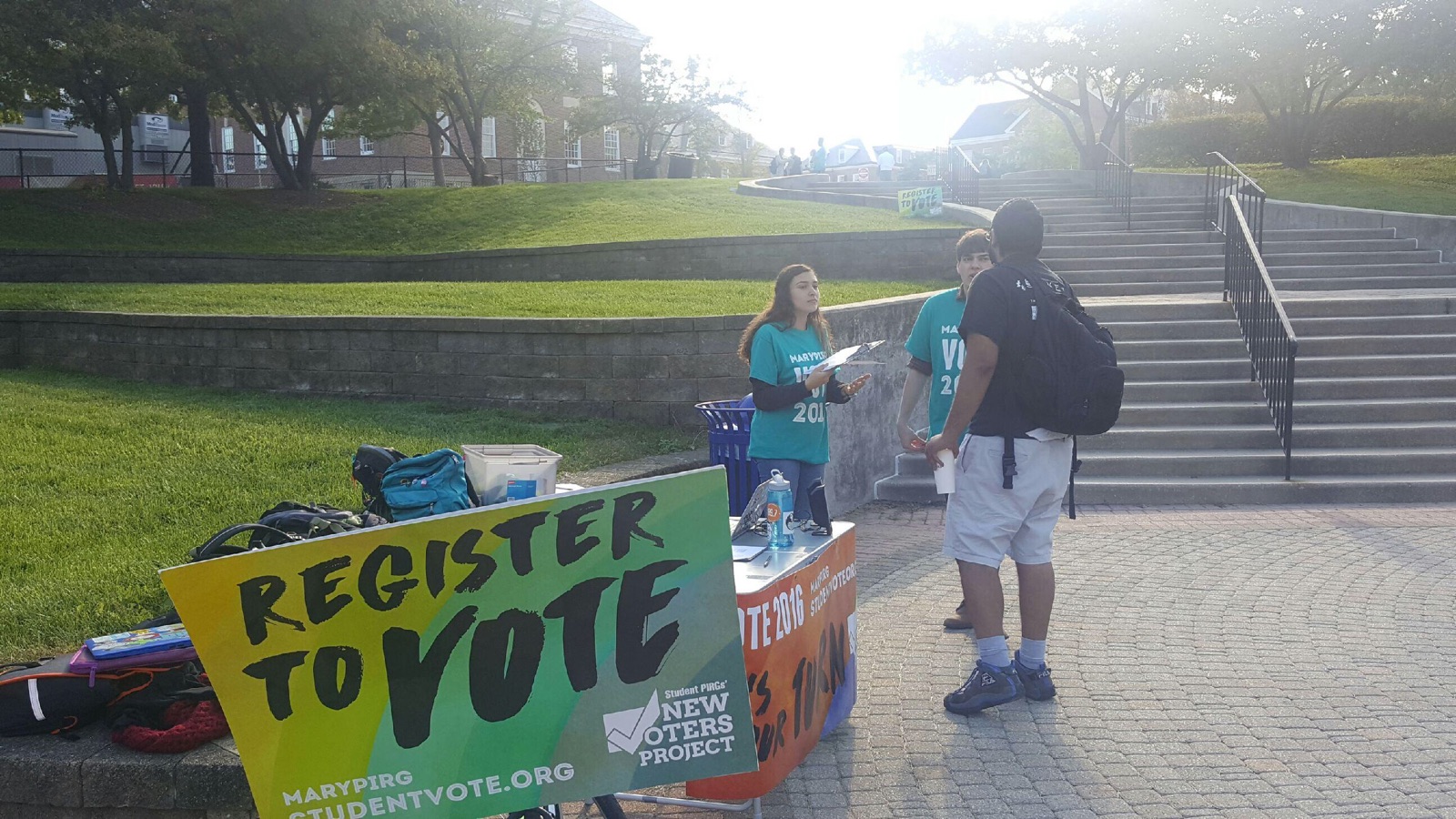 University of Maryland students are pushing to modernize voter registration throughout the state in an attempt to simplify the registration process and increase voter turnout.

This university’s MaryPIRG chapter is supporting a state senate bill that focuses on making voter registration more efficient as part of its Democracy Campaign, which previously centered on establishing a small donor matching program to amplify the impact of personal campaign donations in Prince George’s County.

The bill requires certain governmental agencies, such as the Motor Vehicle Administration or the Maryland Health Benefit Exchange, to inform visitors who undertake certain transactions, such as renewing their driver’s license or apply for health insurance coverage, that they will be registered to vote or have their voter registration information updated unless they opt out of it or are ineligible. In Maryland, voters currently must register at least 21 days before an election to vote in it.

MaryPIRG president Ary Papadopoulos said the bill would increase opportunities for people to be able to vote and hopefully lead to higher turnout in elections.

MaryPIRG plans to utilize its typical activism efforts, including tabling, petitioning and educational panels, to rally support among the student body for the bill, and to increase knowledge of voter enfranchisement.

In the 2016 presidential election, voter turnout in this state was about 70 percent. Turnout for local elections is typically lower, however, with fewer than 15 percent of College Park’s registered voters casting ballots in the city’s 2017 elections.

“Every time a student signs a petition, they’re also learning about this particular issue,” said Papadopoulos, a senior public health science major. “We have hundreds of those conversations every week. A lot of students are getting educated on stuff that’s going on in their local democracy.”

The organization’s members have yet to fully begin their efforts for the semester, but they plan to travel to Annapolis to lobby for their cause and visit lawmakers’ offices to drop off petitions to make a physical statement about student opinion at this university, Papadopoulos said.

Jackie Smith, a junior government and politics major who recently became the leader of MaryPIRG’s Democracy Campaign, said while the focus for the semester will continue to be establishing a small donor matching program in the county, she is also enthusiastic about pushing for voter registration reform.

She said some laws around the country complicate the voter registration process and are “not really democratic,” and expressed hope that reform would allow “everyone [to] have their voices heard without having these roadblocks put in their way.”

Smith said most pushback against voter registration modernization efforts comes from people who are reluctant to share personal information with state agencies or hesitant to give the government more power or abilities.

“To me, there’s really no downside,” she said, “[but] some people are a little bit put off by the idea of government doing too much.”

While some students are supportive of MaryPIRG’s plans to promote the state senate bill, others, such as junior computer science major Adam Ackerman, feel there are more important issues.

“There’s a lot of other problems that might be more pressing than just making it easier to vote,” Ackerman said. “Sure, it’s something that I would want to happen, but I don’t know if it’s something that’s as serious as income disparity and all the other major problems you can think of.”

Junior psychology major Shana Katz, on the other hand, said she is hopeful that voter registration becomes easier and leads to a more civically active society.

“On a college campus, it’s important to talk about voting and being involved in what’s going on in the country,” Katz said. “I think a lot of college students are more aware of issues than other people, and we’re less secluded, so I think it’s a good time to take action.”

Papadopoulos is hopeful that PIRG’s campaign will help modernize voter registration and reduce confusion for those who are unfamiliar with the process.

“We should be making it easier for people to have the ability to exercise their rights,” she said.