Amid nationwide sexual assault allegations, UMD official says “we may need to step it up” 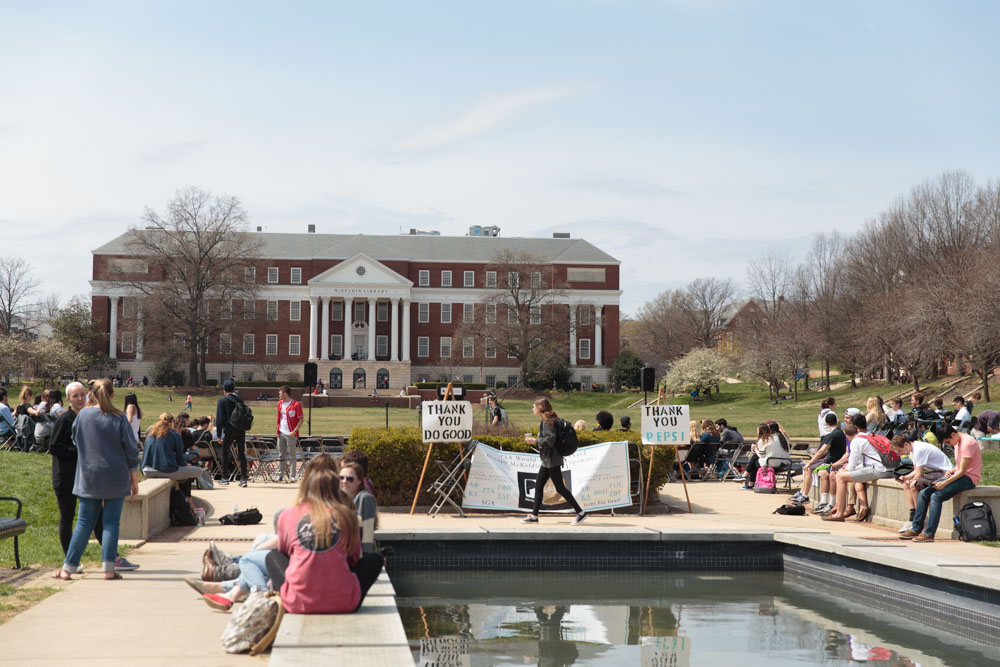 After months of sexual misconduct allegations against high-profile figures, members of the University of Maryland community hope these events will ignite a movement at this university and other institutions nationwide.

“This is a conversation that really needs to keep going,” said Andrea Goodwin, director of this university’s Office of Student Conduct. “This is kind of the beginning of the next phase of adjudicating sexual misconduct and addressing sexual misconduct on college campuses, but even beyond that.”

Students at this university said they plan to use the movement’s attention to take local action. Members of Preventing Sexual Assault, for example, hoped the recent flood of allegations would inspire more students to get involved with the student organization’s mission of supporting survivors and discourage acts of sexual violence.

“When [cases] are not in the national spotlight, people don’t really give it a second thought,” said Kerrigan Stern, a junior journalism major and PSA’s recruitment chair. “It’s amazing that these people are coming forward, but I want people to realize that this is not just in Hollywood — this is real people like us.”

LaVonne Whitehead, lead educator for this university’s CARE to Stop Violence office, which works with victims of sexual misconduct, wrote in an email that she has hope for a growing movement on the campus.

“[Any time] issues of assault are brought into the national conversation the hope is to mobilize allies to engage in a discourse that continues to create social change,” Whitehead wrote. “We have a long way to go, but not being afraid to have the conversation is simply the first step.”

Whitehead added that while CARE does not have a direct hand in creating campus policy related to sexual violence, her office works to educate the university community on such issues. Specifically, she wrote that she wants to “create a campus culture where the default response to a survivor disclosing is supportive and not skepticism.”

“Now is a great time for us to be able to get our message out, because I think people are listening,” Cottone said.

Catherine Carroll, director of the Office of Civil Rights and Sexual Misconduct, declined to comment.

Nikki Wolfrey, a senior government and politics major and PSA member, said she believes her organization can help with “grassroots community organizing” needed to change the culture surrounding sexual violence. The group provides support and resources to survivors, regardless of whether they choose to share their experiences or pursue legal action.

Between the 2014-15 and 2015-16 academic years, sexual misconduct reports at this university increased by 64 percent, complaints rose by 38 percent and investigations jumped by 44 percent, according to the second annual Student Sexual Misconduct Report. This university found seven students responsible for Sexual Assault I — any type of non-consensual penetration — during the 2015-16 academic year, and while a record number of four were expelled, the other three received more lax punishments.

Wolfrey said she thinks this university should “change the conversation regarding the reporting gap.” She added that while high numbers of sexual assault reports could be perceived as negative, the presence of these reports should be seen more positively, because it means survivors feel comfortable coming forward.

“The biggest thing is having more of a direct response from the university,” she said. “They want to pride themselves on being transparent — let us know that our safety is a priority.”

“It’ll be interesting to see how that conversation is discussed in Greek life in particular,” the senior middle school mathematics and science major said. “With all this happening at the national level, it helps to empower women on campus that they’re entitled to come out and they have the support behind them. … We owe it to our community to continue advocating and educating on these issues.”

Shannon added that she is concerned about federal guidelines related to campus sexual assault.

In September, U.S. Education Secretary Betsy DeVos rescinded Obama-era Title IX regulations mandating how colleges and universities investigate and handle sexual assault cases. The department saw backlash from advocacy groups, who said the changes would benefit perpetrators and harm survivors, while DeVos and her colleagues said they intend to ensure justice and protect the due process rights of the accused.

A former student at this university filed a federal lawsuit in 2016 seeking $5 million, claiming his due process rights were violated and he was wrongfully expelled after he was found responsible for sexually assaulting a woman on the campus.

“We’re going to have to monitor our policies and procedures very closely to make sure that they’re aligned with federal guidance, but also to ensure that it is best for our students — both our students who are victims of someone’s misconduct as well as students who are accused to protect their due process rights,” Goodwin said.

Goodwin added that her office is working closely with other administrative units to get feedback from students who have reported or complained about sexual assault and harassment. In light of recent events and federal policy changes, she said “we may need to step it up a little bit.”

Noah Collins, the counseling service associate director at this university’s Counseling Center, said his office utilizes individual and group therapy to help survivors and people involved in these cases, and he hopes recent events will help more people to feel comfortable sharing their stories. Resources are also available to students through the CARE office, the Health Center and the OCRSM.

“Just having a place where everyone around them totally gets it, no one’s going to invalidate them, and they have that support and can speak freely about their experience,” he said.

As accusations against prominent public figures continue, Shannon said she believes society — and this university in particular — faces an important moment.

“The floodgates have almost opened,” she said. “With any cultural movement, it takes a few brave individuals to come forward, and that opens the gates for more people to feel like they have a community of support around them. On campus, it’ll be interesting to see how that plays out.”