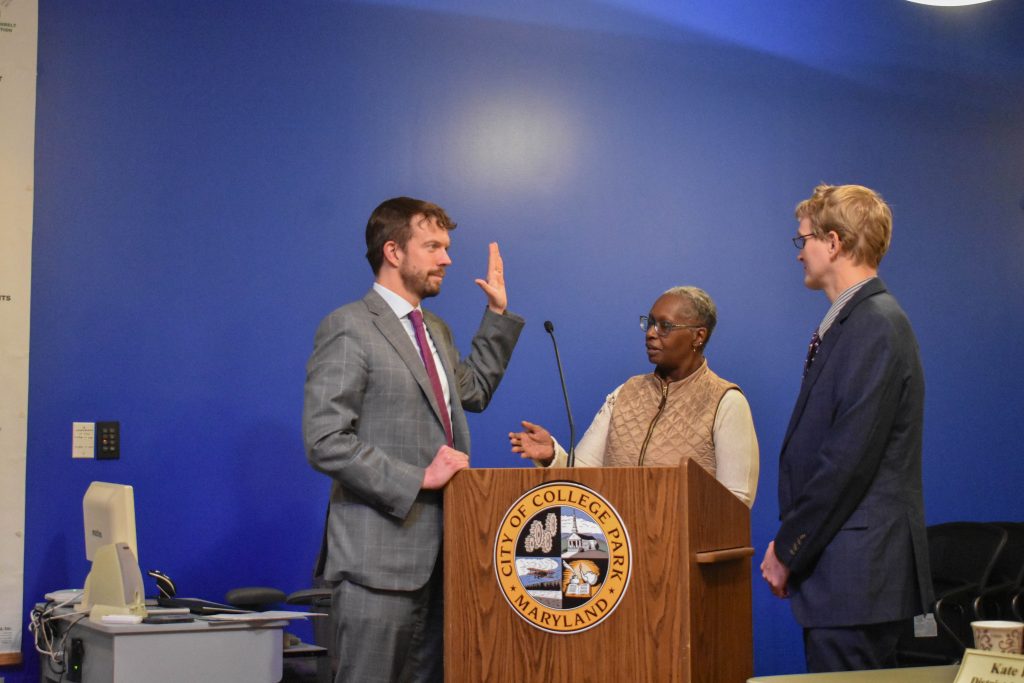 After being sworn in to his second term as College Park’s mayor, Patrick Wojahn administered the oath of office to the 2017-19 City Council.

Wojahn, who was re-elected to his position with 59 percent of the votes on Nov. 7, served eight years as a District 1 councilman before running for mayor in 2015. As mayor, Wojahn said his proudest accomplishments include expanding the mBike program, supporting local businesses and forming the One College Park Coalition in 2016.

In his address, Wojahn shared a progression of how he’s seen College Park grow since he moved to the city in 2003 — a place that wasn’t as walkable and bikeable, with a downtown centered on bars and fast food, alongside other factors — to a more accessible community with a greater quality of life with improvements such as a luxury hotel, high-quality restaurants and a performance center, a change he called remarkable.

“There’s even more to come for College Park,” Wojahn said. “What we do over the next two years is really going to shape that.”

[Read more: “I can make a difference”: College Park Mayor Patrick Wojahn reflects on his career]

Wojahn swore in five council incumbents, as well as District 1 Councilwoman Kate Kennedy, District 3 Councilman John Rigg and District 4 Councilwoman Denise Mitchell, who served as on the council for six years and mayor pro tem from 2013 to 2015.

“Well, I’m back,” Mitchell said. “It’s truly an honor and a pleasure to be on council serving with the mayor in this 2017-19 session. I am truly excited and I’m grateful to the residents of District 4 who voted for me to come back.”

District 2 Councilman Monroe Dennis, who was re-elected to a fourth term on the council, was reappointed as mayor pro tem.

“He is always very thoughtful and level-headed,” Wojahn said. “He is sometimes the port to my turbulent storm, and I do really appreciate him.”

Outgoing council members Christine Nagle, Mary Cook and Stephanie Stullich shared their experiences on the council and cited their gratitude to have served on council. Wojahn defeated Cook in this year’s mayoral race — the most contested in city history — and Nagle and Stullich did not run for re-election after serving two and five and a half terms on the council, respectively.

“It is with some degree of sadness that I will be undertaking saying goodbye to three of our members this evening,” Wojahn said. “Truly, I don’t think people realize how much of a sacrifice it can be to do what we do here every week, how much work it does take. Me and my colleagues, we do this because we love our community, and we do this because we want to give something to the community.”

Stullich reflected on her 11 years on the council, citing feelings of “gratitude and appreciation” and adding that “none of us can do anything on our own. It takes five votes to move forward with anything, and there’s usually a lot of behind-the-scenes work as well.”

2015 marked the first time the council was evenly split between the sexes, but the newly inaugurated council has shifted to five councilmen and three councilwomen.

This year’s election, which followed a contentious non-U.S. citizen voting debate and issues with the council knowing details surrounding changes to its charter, saw the greatest voter turnout since 2001. There was a 14.5 percent voter turnout in November, as compared to a 15.6 percent turnout in 2001.

The new council members cited their optimism for the years to come.