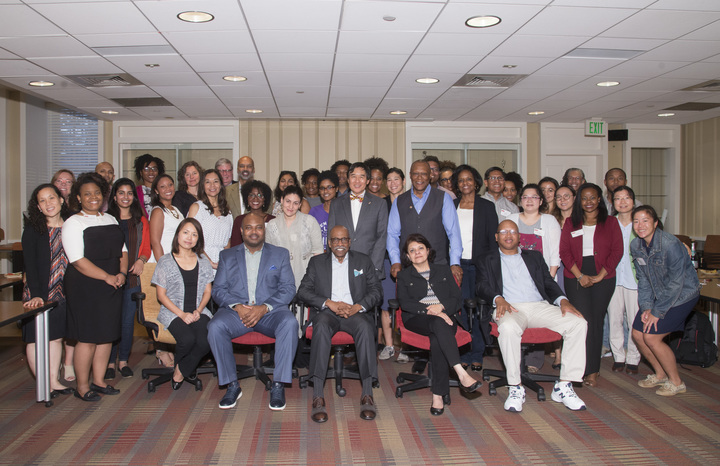 University of Maryland professor Thurka Sangaramoorthy works in a department with no tenured minority faculty.

Now in her sixth academic year at this university, the anthropology professor has begun the tenure process herself. But she said it can be hard to put a tenure portfolio together as a faculty member of color for multiple reasons, including doing work that goes largely unrecognized, such as mentoring minority students and tailoring courses to place a heavier emphasis on diversity and inclusion issues.

“I would like to see more people who look like me at higher ranks, and there are very few,” Sangaramoorthy said. “That’s what makes me want to stay in academia — to know that this is a place that actually values minority faculty because they’re at the top ranks.”

Although this university’s strategic plan for diversity has outlined guidelines to better recruit and retain faculty of color, the numbers have held largely stagnant — or even dropped — for about a decade.

[Read more: 68 percent of tenured or tenure-track faculty are white. UMD Senate aims to change that.]

Although this university has had a slew of new initiatives to hire more faculty of color, Sangaramoorthy points to retention and promotion as the area where this university needs to improve for its faculty to become more diverse.

“Retention has not been addressed in any adequate manner across the board at Maryland,” she said.

University President Wallace Loh said while this university has focused on increasing the diversity of its hires, the problem lies in retention.

Vast differences exist between some faculty members of color and white faculty members’ experiences in perceived inclusion, according to the 2015 Faculty Work Environment survey.

Loh said part of the issue stems from differences in how some departments value varying kinds of research. For example, some want to promote people who do quantitative — rather than qualitative — research, he said.

“Everybody wants to diversify,” Loh said. “‘Hey, this is a great faculty member, let’s hire the person.’ They never stop to think that five years later you’re going to kick the person out because the person is doing qualitative research.”

Public health professor Sacoby Wilson, who is black, said the disparity between how different research is valued has hindered his own tenure process, among others. He said he’s experienced problems in getting tenure that he hasn’t seen white faculty deal with to the same extent.

Before coming to this university, Wilson worked at the University of South Carolina for four years, so he didn’t think he would have to wait the full six years before going up for promotion. But he said this university treated him as a brand new professor.

“If you compare my package to [other professors’] packages, I had to actually do double or triple the work to get tenure,” Wilson said. “And that’s not fair.”

Wilson said these multiple factors, among others, may be why there is a revolving door of minority faculty at this university.

This is not the first time this university has tackled these types of issues, Loh said, adding that this university’s ADVANCE program — which works to support the retention and advancement of women and underrepresented faculty — has had success in improving retention rates among women.

Using the infrastructure of the ADVANCE program, public health professor Stephen Thomas and electrical and computer engineering professor Carol Espy-Wilson came together to launch the ADVANCING Faculty Diversity program in 2013.

“It’s about trust,” Thomas said. “Who can you go to when you feel you’ve experienced a microaggression because of your race or your gender? … Being a faculty [member] of color, on this campus or any campus in the country where the majority is white, has its challenges and its burdens, and we feel that ADVANCING Faculty Diversity helps to lift those burdens.”

About 50 faculty members have completed the AFD program, and 17 are currently in the program. After carefully measuring program participants’ success against university benchmarks, program organizers found those who participate in the AFD program are significantly more likely to be retained and advance than those who do not, she said.

Although this university’s 2010 Strategic Plan for Diversity lists that the “chief diversity officer will monitor faculty retention and promotion/tenure rates,” Associate Provost for Faculty Affairs John Bertot said there wasn’t data immediately available on a university-wide level that tracked these rates. Bertot added that this university and Chief Diversity Officer Roger Worthington are working on streamlining a system to better monitor that information.

Thomas said he’s seen this university start to make progress on these issues, noting that in the past year, four African-American men were promoted and tenured, which he dubbed a historic number.

Sociology professor Rashawn Ray, who was in one of the program’s first cohorts, said “it has helped almost singlehandedly underrepresented minorities get promoted and retained here at the University of Maryland.”

It’s usually not about compensation or money, Ray said, but rather about whether underrepresented minorities feel they are valued and heard and that their research is worth the same as other faculty members’ work.

Loh remains hopeful that this university is shifting toward more diversity and inclusion.

“If you and I have this conversation in seven or eight years,” he said, “I think we’ll say that the numbers will change.”