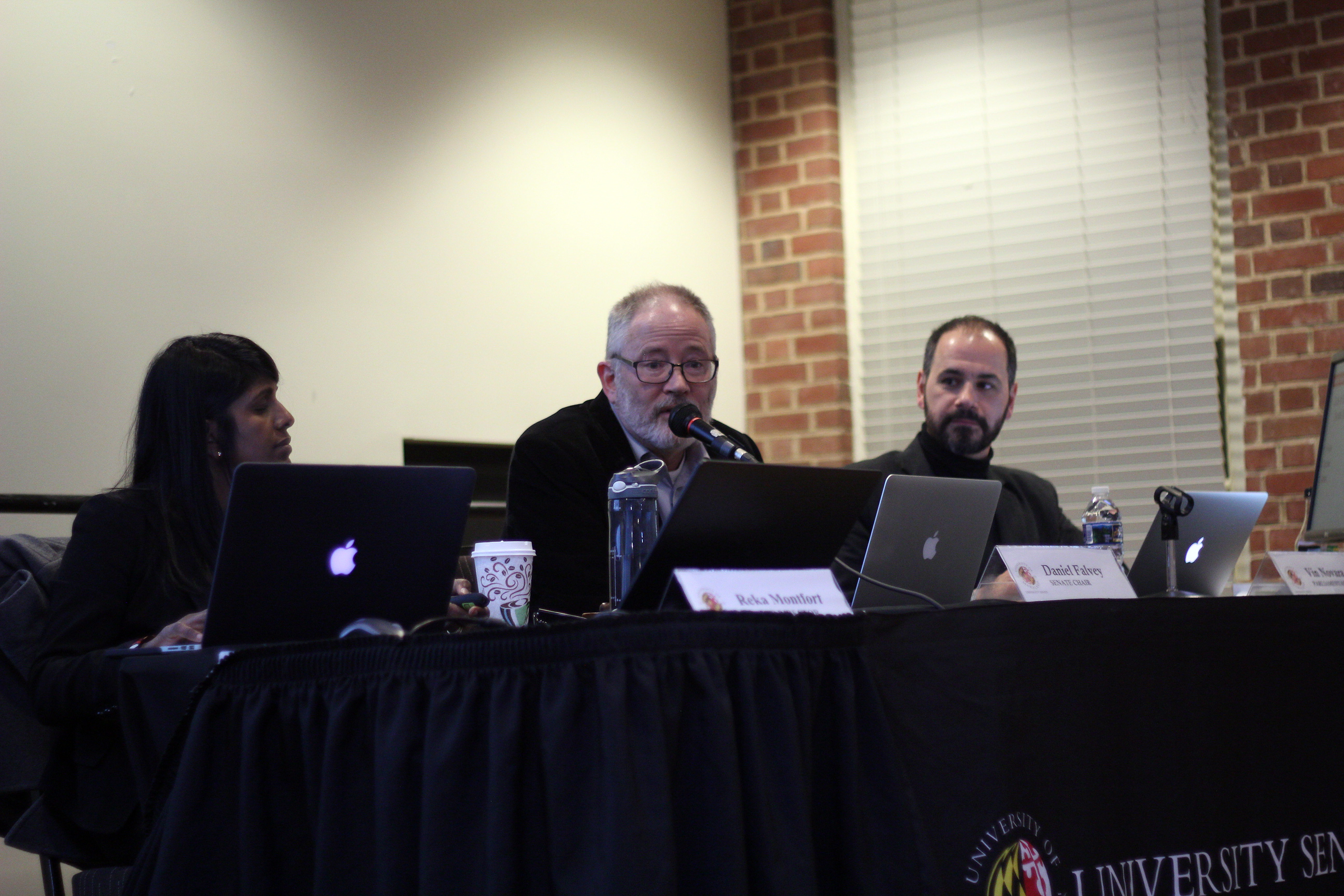 The University of Maryland Senate voted Thursday, during the body’s final meeting of the semester, to approve changes to the Code of Student Conduct regarding standards of evidence for student misconduct and the role of attorneys during hearings.

The revisions — which were approved by a vote of 72 to 17 with six abstentions — aimed to make the code’s language more accessible to students, and implemented several new substantive measures, including creating broader definitions for prohibited actions and lowering the standard of evidence in misconduct cases from “clear and convincing” to “a preponderance of the evidence.”

Before the revisions to the code can go into effect, however, they need to be approved by university President Wallace Loh.

The most debated change concerned the role of attorneys during administrative hearings for breaches of student conduct. Under the new rules, attorneys hired by students who are accused of breaking the Code of Student Conduct can serve as an adviser, but cannot actively speak or advocate on their behalf during hearings before the Office of Student Conduct.

This measure aligns the standards for the Code of Student Conduct with those of the Code of Academic Integrity and the sexual misconduct policy, said Andrea Dragan, Student Conduct Committee chair. It also ensures students are able to speak for themselves, as well as eliminates the risk of power imbalances between students and lawyers, she added.

In September 2016, the senate tasked the Student Conduct Committee with a full review and revision of the code. Since last fall, the committee has performed research and held periodic meetings to discuss different aspects of the code and review elements that may need changing.

The Code of Student Conduct was originally approved by the Board of Regents in 1980, said Andrea Goodwin, director of the Office of Student Conduct and a non-voting committee member. While many amendments and changes have been applied to the code since then, it has not been fully revised, she added.

“We wanted to make it a cleaner version … so that students not only understood what their rights are and their responsibilities, but also what’s prohibited and what the process is if they get in trouble,” Goodwin said, explaining that the committee worked to decrease the amount of “legalese” in the document and make it easier to understand.

All students have a right to student defenders appointed by the Student Legal Aid Office, who are still allowed to speak during hearings, Dragan said.

Edward Priola, a senator from the Institute of Applied Agriculture, argued the provision was ill-advised and infringed on students’ due process rights.

“When you have serious charges, that’s a point when a student’s livelihood and future are at stake,” Priola said. “What they’re doing is gagging attorneys so they can’t defend their client in the active process. And the point is that many students, many of whom are basically minors, haven’t reached the age of maturity and are not able to defend themselves in a competent way.”

Priola said he was disappointed the senate approved the revised code, describing it as a “systemic inequity” that could potentially represent “injustice for students.”

Others, however, thought the change was positive, arguing it represented a movement toward equity across campus.

“This is a really good thing for the campus,” said Kiely Duffy, the director of shared governance for the SGA, who spoke at the meeting in favor of the revised code. “It really helps level the playing field for everyone … when people get to use really hot-shot lawyers, inherently, it’s unfair.”

Duffy added she was glad the code’s language was updated and made more accessible, especially for the sake of students who are not native English speakers.

Dragan said she was proud the revision passed, and she appreciated the thoughtful discussion during the meeting.

“I thought all the questions were very relevant and I was happy to answer them,” she said. “I think it’s always good to debate the issues.”