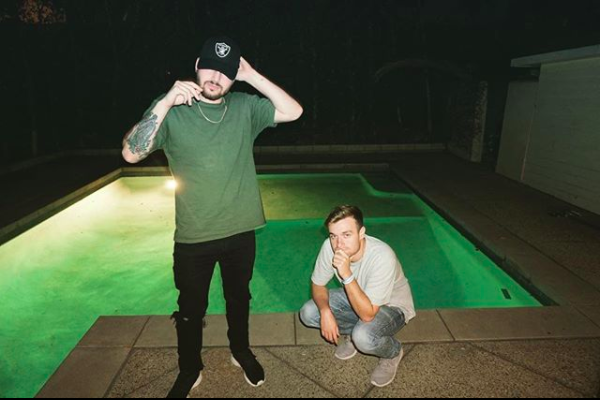 “The dream is to live off of music, which is what we’re achieving now. Maybe write a couple hit songs here and there.”

Still to reach their prime, the infectious urban pop duo gianni & kyle are unlikely poster boys for the booming and diverse Renaissance era of hip-hop. In riding the wave of musicians who are pushing the boundaries of hip-hop fusion, these artists from Annapolis are making their own waves with an authentic and still-fresh pop-rap sound that fires on all cylinders.

The duo, made up of Gianni DiBernardo and Kyle Devore, is signed to the low-key hardpink records with other Maryland- and Los Angeles-based music artists. Although their portfolio lives on SoundCloud, they aren’t your stereotypical internet rappers: Their selling point is a raw knack for handcrafting catchy pop melodies with a contemporary edge.

The two rappers attended high school together in Annapolis, and Devore said they “linked and became fam, as they say,” during their senior year. DiBernardo attended the University of Maryland, where “he studied a lot, didn’t go out much, and put a lot of focus on music,” Devore said.

After DiBernardo graduated in the spring, the duo moved out to Los Angeles in June to more aggressively pursue their music career together.

The former East Coast rappers found their footing on SoundCloud, posting their first track in 2015, and then hit singles like “fuckboi,” “tension,” and “we ain’t” in 2016, before they expanded to other platforms.

DiBernardo said that their sonic vibe, which is on a feel-good wavelength likened to that of Huey Mack or Hoodie Allen, originates from “growing up listening to early 2000s R&B and pop. We both write everything — one hook might be written by me, another by Kyle — but we always work together.”

Most frequently, their lyrics tackle the archetypes of drugs and modern romance through the DMV’s characteristic vernacular. Songs like “pop a pill” and “fuckboi” showcase their stylistic range — one month they might a produce softer, acoustic-laced track on the lows of modern love, and the next month they might drop a blaring pop-rap anthem to blast with the windows down.

Their debut album backstreet boy meets world was released Feb. 21 and is available on all major streaming services. It features more of the same bubbly, bumping, feel-good tunes that strike a familiar chord with a lot of ’90s kids.

The gianni & kyle flow meshes seamlessly with the wavy soundscapes of aspiring producers like kojo a. and Nicky Quinn, both of whom are also signed to the hardpink label. Through smooth sing-rap laid over groovy beats and synth-laden backdrops, their brand of hip-hop lyrically epitomizes one face of the young East Coast lifestyle, and yet emanates a uniquely lax and cruisy West Coast chill vibe fit for dancing, driving or unwinding.

backstreet boy meets world prompted positive coverage from The Plug Society, OnSMASH, Earmilk, Elevator and MTV UK, among other outlets. But although gianni & kyle have already broken through the glass ceiling of recognition that so many artistic hopefuls never reach, they have yet to be recognized by some of the bigger names in the contemporary digital music press, such as The Fader, Pitchfork, Complex and Pigeons & Planes.

Which is to say, this is still the come-up. It’ll be interesting to see how their sound and lyrics mature in forthcoming projects. Their ability to create hot, radio-friendly hooks just might give them the staying power that eludes the bulk of college rapper burnouts.

Phasic “frat rappers” like Sammy Adams, Hoodie Allen, Huey Mack and Mike Stud launched rap with lyrics centered on the high life and college party lifestyle. gianni & kyle stray just left of that crew with melodically centralized tunes and lovestruck narratives that are more of a hash of R&B, pop and hip-hop.

Expect more juicy loosies with high replay value until their next project, which DiBernardo said is slated to drop in early 2018. Fans can rest assured that they plan to maintain their distinct vibe, as “each song will represent a different relationship [they’ve] had with a girl since being out in Los Angeles,” said DiBernardo.

As for what else is upcoming, Devore said, “Huey [Mack] is the homie. Definitely have a few things coming with him.” The duo also said they’ve been talking about going on tour and are in the process of straightening out logistics.

While gianni & kyle may not be a household name yet, they have already collectively gathered millions of SoundCloud listens, Spotify streams and YouTube views. Their hit single “fuckboi” was even featured on Spotify’s United States Viral 50 playlist at No. 10 last year.

It remains to be seen if the duo will attain a more iconic status in the music industry. But through songs that embody the voice of bougie youth everywhere, and by marketing their work with flavorfully digital and minimalistic cover art, they’re already living out their ambitions.