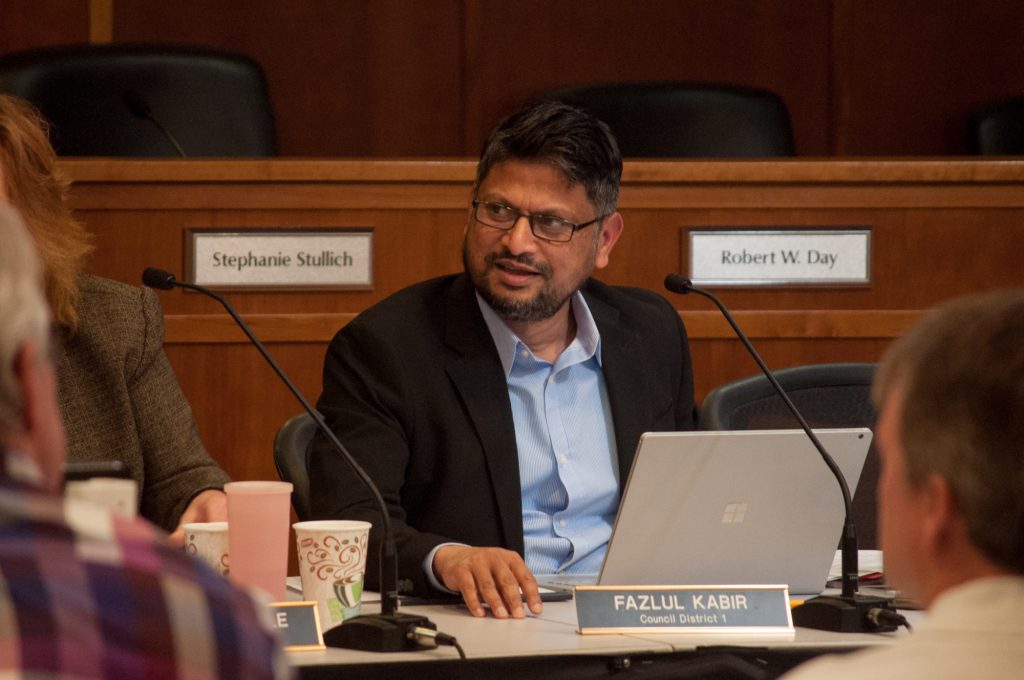 The College Park City Council voted unanimously Tuesday night to send comments on a draft rewrite of the county’s zoning ordinance to the project’s coordinator.

The city supports the county’s improvements to make documents more user-friendly, modernize regulations and update land use and zoning categories, the letter read, but there are “still several substantive areas” the city wants to continue considering, as they could hurt College Park.

The letter included nine areas needing further consideration in the proposed zoning ordinance, as well as one comment on subdivision regulations.

“We are concerned about what this might open the door for,” Mayor Patrick Wojahn said, adding that areas of concern include the density of development, design standards and impacts on the 2010 Route 1 corridor sector plan. “There are many good things that will help streamline the development process … but there needs to be balance with the need to make sure that we don’t go too far in terms of new development in College Park.”

One area needing further debate is the proposed elimination of several types of zones — such as the Development District Overlay Zone and Transit District Overlay Zone — which cover large portions of the city, according to this week’s mayoral update. The transit-oriented zones that would replace these areas would add density along the Route 1 corridor, but they should be more sensitive to nearby neighborhoods, the update read.

The proposed ordinance includes more of a “one-size-fits-all” solution to the Route 1 corridor, which “isn’t really appropriate,” Wojahn said.

Other areas of concern include a proposed requirement for certain zones to have a minimum amount of mixed-use development — urban development that blends residential, commercial and other uses — which could have a “chilling effect” on new development, or lead to vacant storefronts, the letter read.

Another section raises concern that transitioning to a new zoning category allows for “too much density” in the Hollywood Commercial District, according to the update, and a different zone, which would allow for medium density residential and low intensity commercial zones, might be better.

“I really appreciate that staff included the specific item about the Hollywood Commercial District,” District 1 Councilman Fazlul Kabir said. “I haven’t heard anyone asking for more density in the neighborhood, so that is more appropriate.”

The Maryland-National Capital Park and Planning Commission released its Comprehensive Review Draft in September, said Chad Williams, the project manager of the zoning rewrite team. Since 2014, the rewritten ordinance was drafted after more than 300 meetings with county stakeholders.

The commission hopes to receive all public comment by Dec. 15 so it can analyze them and incorporate resulting revisions as it prepares to submit legislation to the Prince George’s County Council, Williams said.

“We analyze each and every comment,” Williams said. The team compiles and analyzes comments before staff members decide whether they agree, and if members are in favor, the team recommends the revisions to be incorporated into the draft zoning ordinance, he said.

The commission aims to provide the legislation in January and for the county council to vote on it spring 2018, according to the zoning rewrite website. They plan to have the new code take effect six to eight months after its adoption, Williams said.

“In many ways, zoning is the most important function of any government, any county government … because everything that comes after — roadway networks, public facilities, public schools, relationships with taxation — all of this flows out of zoning,” Williams said. “So we hope that people are paying attention, are listening to their colleagues having conversations, and are just following along with the process as best as they can.”