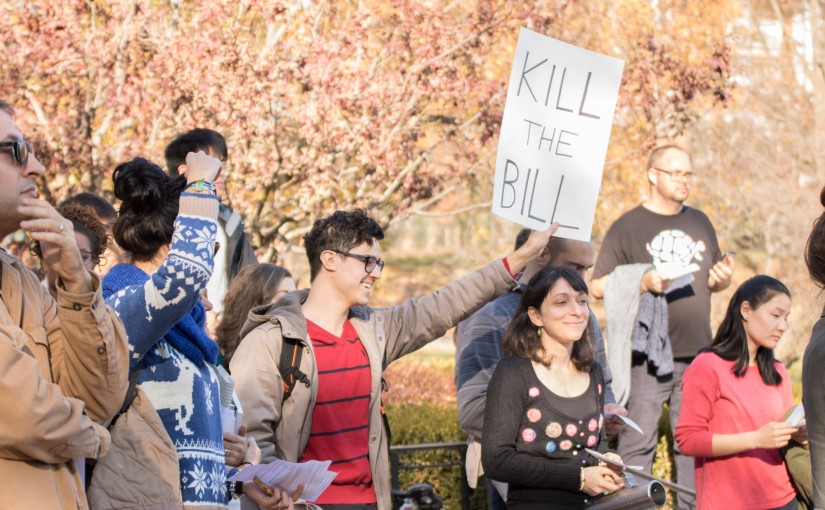 The United States House of Representatives and Senate have each passed tax reform bills with far-reaching implications for university students. Now the bills must be reconciled in committee, and some experts say the House version would be more damaging.

Ted Mitchell, the president of the American Council on Education, dubbed the Senate’s version a “significant improvement” over the House’s, but said it remains “simply wrong-headed.”

The House Republicans’ version would make tuition waivers, which are often granted to graduate students to make their education more affordable, eligible as taxable income.

It would also get rid of an IRS rule that allowed employers to offer tax-free paid assistantships to graduate students and end deductions for student loan interest payments.

The Senate’s version of the bill didn’t include either of these provisions.

Both the Senate and House bills, however, include a 1.4 percent tax on the endowments of some private colleges. A Friday amendment to the bill ensured this tax would only apply to colleges with endowments totaling above $500,000 per full-time student.

The University of Maryland isn’t impacted, as it is a public institution, but 25 to 30 of the country’s private institutions with large endowments will have to pay this tax if it’s in the final bill, according to The Washington Post.

Both bills would also nearly double the standard deduction for tax filers. Thanks to this deduction, pieces of individuals’ incomes are excluded from taxation. It’s standardized based on filing status and age, among other factors.

Less donations could mean less tuition assistance for low-income students, less programming, or any number of reductions in university services. This university received its largest donation in school history in October, totaling $219.5 million, about half of which is going toward providing financial aid for incoming students.

University President Wallace Loh spoke against this measure in an email to the campus community Thursday.

“The reduced incentives for charitable donations could lead to a drop in philanthropic giving, which would then result in fewer institutional scholarships and increase financial pressures on students and their families,” Loh wrote.

The Senate’s bill also includes deductions for state and local income ​taxes and sales ​taxes, which could put “downward pressure” on state finances, therefore reducing their endowment for this university, Loh wrote.

The Association of American Universities, of which this university is a member, released a statement against both versions of the bill Saturday.

“Both measures, the House and Senate versions, will undermine America’s global lead in higher education and damage our nation’s ability to train the next generation of scientists, engineers, doctors, artists, and entrepreneurs,” wrote the organization’s president, Mary Sue Coleman.