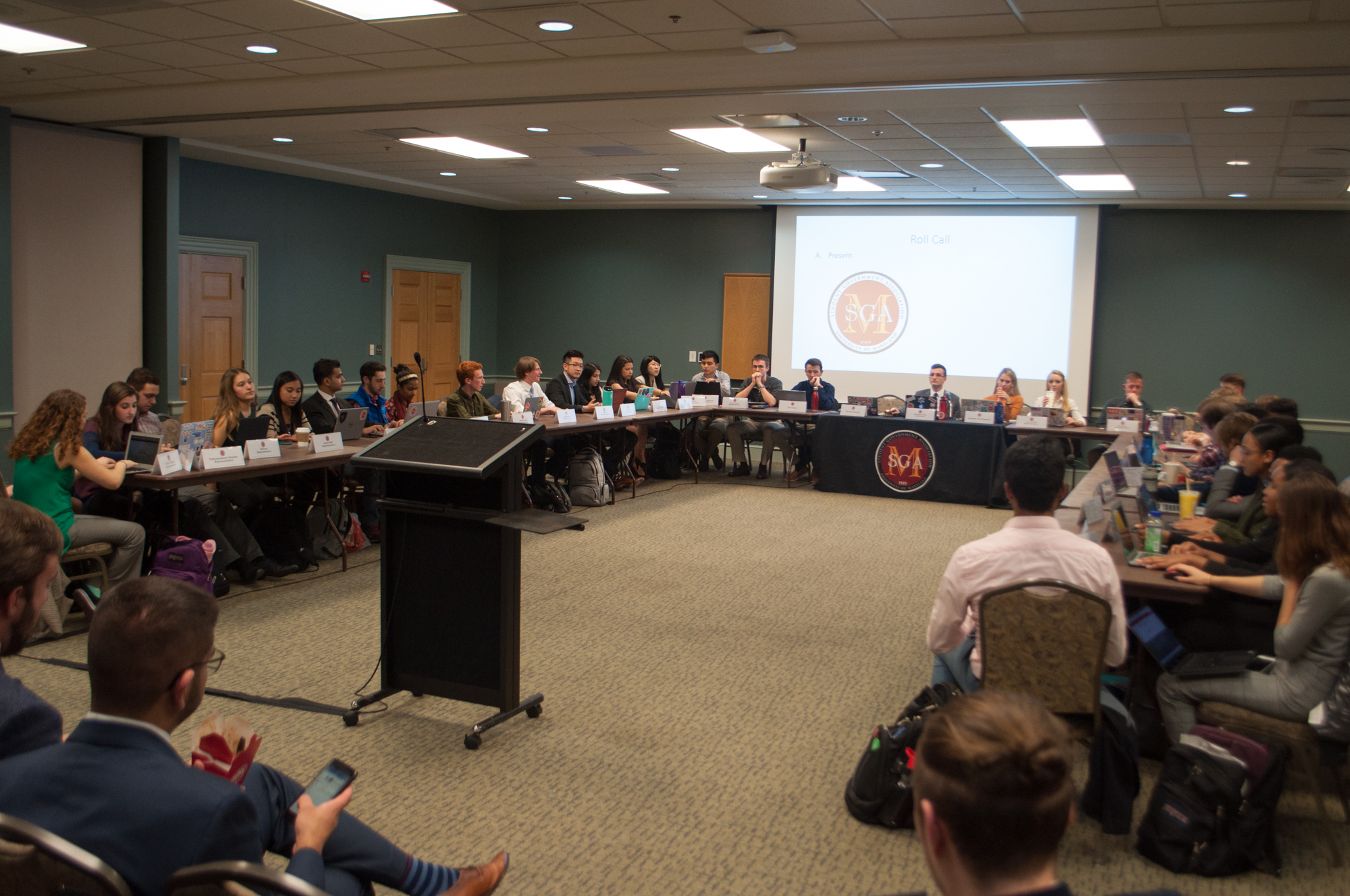 The SGA convened on Wednesday, November 29, 2017 to discuss various issues and bills (Elliot Scarangello / The Diamondback).

The University of Maryland SGA passed a resolution Wednesday to support a bill that would endorse this university partnering with the Crisis Text Line to create a free 24/7 support line that would connect students in need with a counselor.

The resolution passed 38-0 with one abstention.

Anyone in the country can reach a trained crisis counselor by texting 741741, but this partnership would grant this university a specific number for students to text , said Christine Shen, a computer, mathematical and natural sciences representative who proposed the bill.

This would give students more direct access to mental health support, the senior computer science and physiology and neurobiology major said.

After Rohini Nambiar, director of the Health and Wellness Committee, received an email from an alumna asking the Student Government Association to bring another mental health resource to the campus, she was inspired to introduce a resource that students can access 24/7.

Nambiar, a junior public health science major, began working on the bill over the summer and said she hopes to complete the partnership by the spring semester.

[Read more: Students can access all of UMD’s mental health resources thanks to an SGA-created portal]

Kelly Salomon, a sophomore elementary education major, said the line would be extremely helpful. A friend of hers recently committed suicide, and she said that a crisis line would have made it easier for him to reach out for help.

“It would have been easier for him to get into contact with someone instead of having to go through a long process of setting up an appointment with them,” Salomon said. “That would have helped him cope with whatever he was going through.”

Amid an increase in hate bias incidents on the campus, the Counseling Center experienced an uptick in emergency appointments by as much as 24 percent during the 2016-17 academic year.

Some members of this university’s Active Minds at Maryland have complained about not being able to get an appointment at the Counseling Center in a timely manner, said Ateret Sultan-Reisler, the group’s president. The organization works to raise awareness about mental health.

“There doesn’t seem to be enough counselors for the number of students on campus,” the senior art history and psychology major said. “There are some cases where students do reach out and if their issue isn’t considered urgent enough, they may be turned away.”

The University Counseling Center is unsure about the line’s potential benefits because it could raise privacy and ethics issues, said Noah Collins, the center’s associate director.

“One issue is who owns the data, so that’s one of our concerns. … We’re under strict ethical guidelines as well so that might blur those lines,” Collins said. “So that’s some of our concerns of why we haven’t adopted it ourselves, but we’re not against other bodies looking into it.”

After their text conversations, volunteer crisis counselors fill out a survey to keep track of specific issues that came up, according to the organization’s website. Crisis Trends, which is part of the organization, gathers data on the prevalence of several issues, such as anxiety, depression and sexual abuse.

Any information that could identify the texter is erased, according to the Crisis Trends website.

Other Big Ten schools such as Penn State University and Rutgers University, have also partnered with Crisis Text Line.

Students must take initiative and show this university’s administration they are passionate about mental health, Shen said.

“Once the administration sees that students care they will act and be more apt to provide more money and resources,” Shen added.