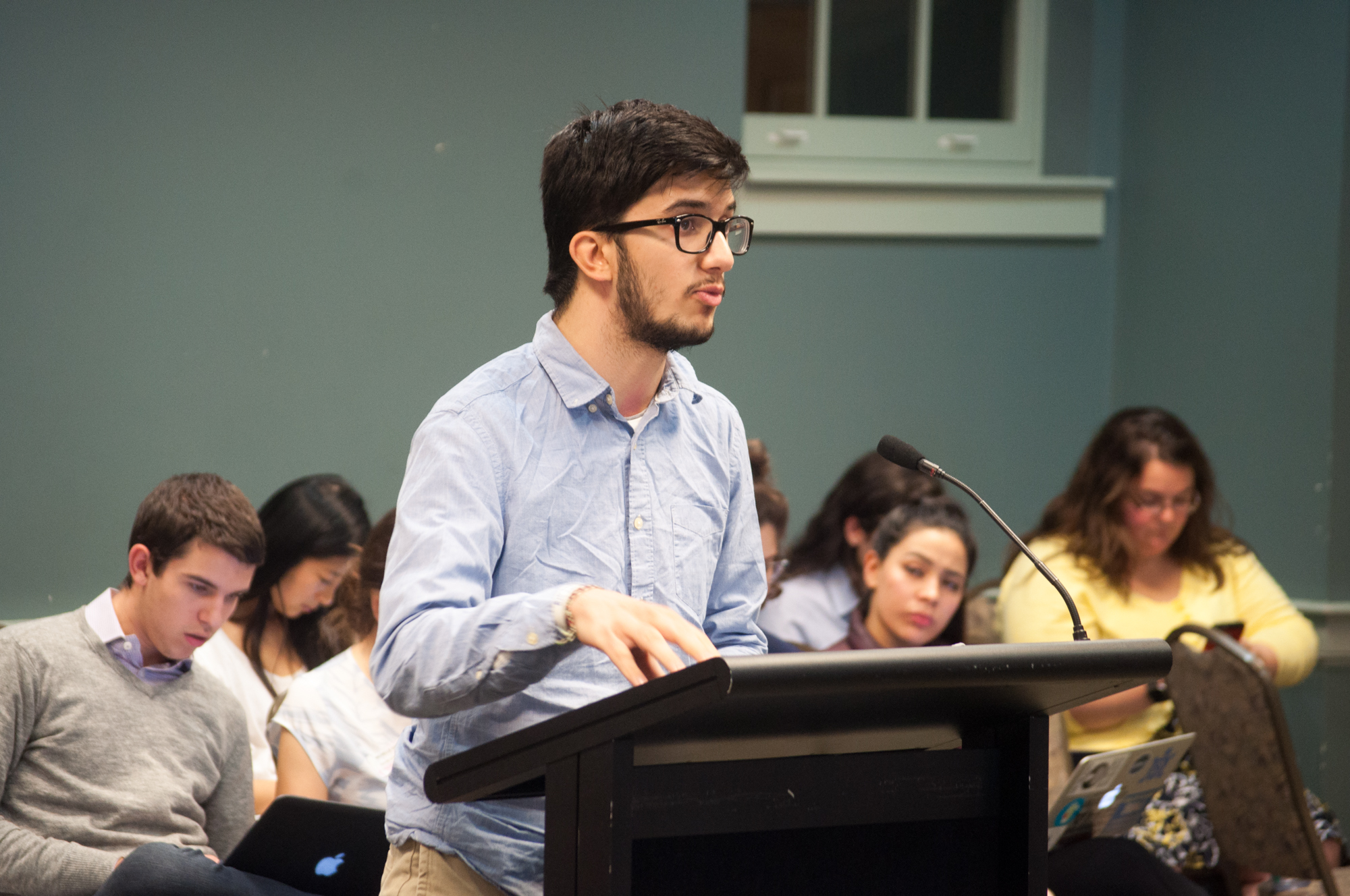 Yusuf Mahmood, a Junior economics and philosophy double major, speaks to the SGA on behalf of the Students for Sensible Drug Policy at UMD regarding a proposed bill that seeks to reform the University's drug policies (Elliot Scarangello / The Diamondback).

The University of Maryland SGA voted to table a resolution recommending that the Department of Resident Life update its drug policy to reduce punishments for students.

Tabling the resolution will give bill sponsor Leah Barteldes more time to talk with the Office of Student Conduct and Resident Life to get their opinions on the proposed recommendations, said Barteldes, a behavioral and social sciences representative.

Barteldes will also work to clarify the bill’s language to maintain a focus on punishment for marijuana, rather than all drugs.

“The [bill] was too vague and didn’t refer to marijuana anymore so we wanted to make sure we’re still keeping the same message,” Barteldes said.

Another recommendation seeks to remove potential housing termination and suspension or expulsion for student residents over 21 years old who possess less than 10 grams of marijuana.

The suggested six-week substance abuse program sanction and random drug testing should stay in place, according to the resolution.

There is disparity between the federal and state governments regarding punishment of drug-related crimes, Barteldes said.

In 2014, the state of Maryland decriminalized the possession of less than 10 grams of marijuana for people who are at least 21 years old, with a $100 fine as the maximum punishment for the first offense. In 2016, the Maryland General Assembly decriminalized possession of marijuana paraphernalia such as pipes and rolling papers, setting a maximum penalty of a $500 fine.

The SGA’s recommended policy changes would eliminate gaps in punishments for drug-related incidents in dorms, as resident assistants and directors sometimes enforce policies differently based on the case, Barteldes said.

“I just want to be pragmatic … and I think they’re more likely to accept something that has some sanctions still,” Barteldes said, adding that ideally, she wouldn’t have the six-week substance abuse program and random drug testing.

“It doesn’t necessarily endorse drug use, but it endorses responsible drug use,” said Barteldes, a junior government and politics and public policy major. “Teaching how to make responsible decisions regarding drugs [would help] preventing abuse.”

Resident Life would likely not be able to change its policies in accordance with the SGA’s recommendations, said Keira Martone, assistant director of Resident Life for Student Conduct. This university receives federal funding, so the department must comply with federal law, which enforces stricter punishments, Martone said.

Enforcing the SGA’s suggestions shouldn’t cause this university to lose funding, Barteldes said.

“This just changes the university’s recommended sanctions, which don’t have anything to do with state or federal law,” Barteldes said.

This university changed its sanctioning policy for resident drug-related offenses in 2012, Martone said. The changes aim to provide alternative punishments to removing students from on-campus housing, especially for a first-time offense, Martone said.

First-time offenders possessing less than 10 grams of marijuana who cooperate and take responsibility for their actions receive housing probation and an education sanction — such as substance abuse intervention that may include classes — instead of immediate removal from housing, Martone said.

The Residence Hall Association Senate has not spoken with Resident Life about the proposed changes, said RHA Vice President Tzvi Glazer. The senate would need to look more carefully into the legality of policy change before making any decisions, Glazer said.

Because marijuana is decriminalized in this state, punishment for drug-related policy violations should be reduced in university housing, said sophomore computer science major Nithin Richard.

“But it’s university owned, so what we say doesn’t matter,” said Richard.

The current drug policy isn’t problematic as it stands, said Kent Hall resident Eric Winik. While Winik has heard stories of students getting in trouble with drug violations, any amendments to the policy wouldn’t affect him personally, he said.

“You already do have a warning, so nothing too bad happens after you get caught the first time, and then you know you shouldn’t be doing it,” said Winik, a sophomore economics major.

While random drug testing may be unfair to students, as marijuana is legal for recreational purpose in Washington, D.C., the bill is still a great step forward, said Sydney Heise, a representative from Students for Sensible Drug Policy.