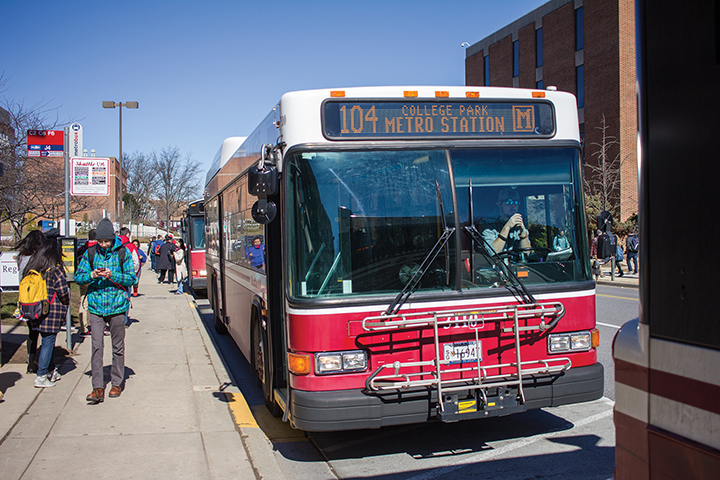 The proposal, which was discussed at an open forum at Stamp Student Union on Monday, calls for a $14 increase for full-time undergraduate and graduate students and a $7 increase for part-time students in the shuttle bus student fee for the 2018-19 academic year. This would amount to almost $419,000 in increased revenue that would help provide a 5 percent pay raise for full-time Shuttle-UM drivers, according to the proposal.

Forum attendees included members of the Student Government Association and Residence Hall Association, as well as student workers and representatives from the American Federation of State, County and Municipal Employees 1072 labor union. The groups discussed the proposal and voiced possible concerns about its implementation.

[Read more: UMD DOTS is starting a vanpooling program for commuters this spring]

About $10 of the $14 would go to increasing pay for full-time drivers. Full-time drivers make a $16 per hour starting rate that ties for the third-lowest rate among the rates of 16 transit agencies in the area, according to the proposal. Only Annapolis Transit and Central Maryland RTA pay lower salaries to their employees, while Montgomery County RideOn pays the highest rates at about $19 per hour, the proposal said.

“We were seeing drivers leave us,” Allen said. “The driver wage problem is real and could threaten our ability to deliver service.”

The remaining $4 of the upped fee would include fundinga 50-cent boost in the student driver hourly minimum wage to $13 per hour, as well as university-mandated increases in employee pay and fringe benefits and higher Facility Management maintenance costs for things such as water and electricity, according to the proposal.

Patrick Fox, a sophomore aerospace engineering major and a representative from AFSCME 1072, said he was in favor of the fee increase but asked why students have to fund them.

“We want [the drivers] to be paid a lot more, but we’re questioning whether that responsibility should consistently fall on students paying this fee,” Fox said.

The Graduate Student Government’s Committee for the Review of Student Fees, which advises university President Wallace Loh and his cabinet on mandatory and non-mandatory fee proposals postponed a vote on the proposal to explore other options, such as modification and elimination of existing Shuttle-UM routes, according to a DOTS press release.

“This postponement will allow our student community to weigh in on how the fee increase will affect them compared to the impact of a possible shuttle modification/reduction,” Allen said in the press release.

Allen offered potential reductions in Shuttle-UM services, including the elimination of weekend service for the 104 College Park Metro Station route and 133 Mall at Prince George’s route, as well as an adjustment to all on-campus bus routes to only run after 5:30 p.m. on weekends. These routes could be taken away because they are “not necessarily related to going to classes,” Allen said.

“[Students] don’t know when they are going to be able to go to the grocery store,” Corona said, adding that “increasing visibility” of bus routes would better inform students about their options and would encourage them not to bring cars to the campus.

The University Senate’s Campus Transportation Advisory Committee will meet again in February to vote on the proposal.

“Do we want to eliminate any routes? Certainly not,” Allen said. “Do we believe that this increase for the drivers is necessary? Yes, but something has to give.”