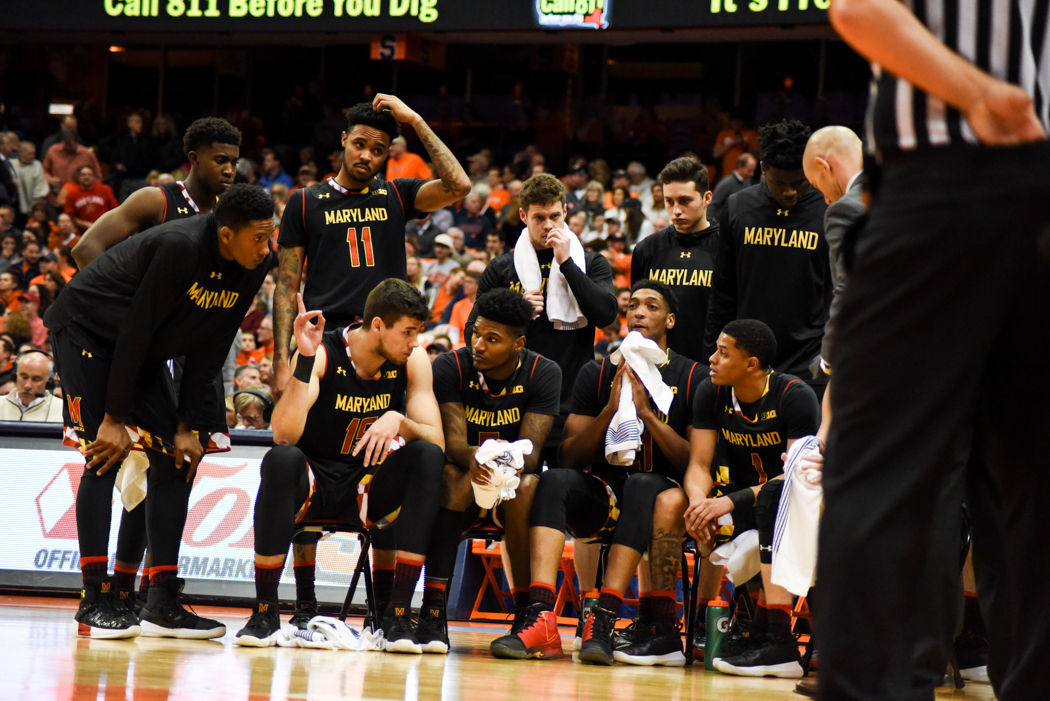 SYRACUSE, N.Y. — After offering no answers for zone defenses last season, the Maryland men’s basketball team fielded a bevy of questions over the past month regarding how it would attack those schemes. So it was only fitting the final minute of the Terps’ 72-70 loss to Syracuse on Monday night came down to their ability to score against the Orange’s historically strong 2-3 zone.

After guard Tyus Battle’s 3-pointer gave Syracuse a two-point lead with 54.4 seconds remaining, the Terps turned the ball over on their following two possessions. While guard Kevin Huerter’s seventh trey of the game with 7.5 seconds remaining brought the Terps within one, Battle’s dunk on the next possession all but sealed the Orange’s win.

“Syracuse slowed the game down, so we couldn’t get out in transition,” guard Darryl Morsell said. “Their zone, they have great length. They were able to play in passing lanes and still contest shots.”

Huerter scored a season-high 23 points on 7-for-9 3-point shooting and converted on four treys in the second half, halting the Orange’s momentum on multiple occasions in his hometown state. Syracuse, though, always had an answer. Battle, who was a gametime decision with a back issue, paced the Orange with 18 points.

On Maryland’s possession after Battle’s 3-pointer, Turgeon drew up a play for Huerter. Guard Anthony Cowan dribbled into the middle of the zone and lost the ball. The Orange swiped the ball from Morsell on the high post on the Terps’ next possession.

“Our spacing wasn’t good,” Turgeon said. “The whole time you’re saying, ‘Hey guys, get Kevin a shot,’ because he was making almost all of them. We couldn’t seem to do that … We were scrambling.”

Three days after struggling to score against a 1-3-1 zone in its loss to St. Bonaventure, Maryland (6-2) still searched for the best player to place on the high post against zones. The Terps, who were playing their third game in four days, rotated between Huerter, Morsell and forward Ivan Bender in that role.

Fernando battled foul trouble throughout, though, forcing Maryland to rely on center Sean Obi and Cekovsky.

“I felt like [Fernando] hardly played the second half,” Turgeon said. “He lost his rhythm a little bit.”

The Terps, who gave away the ball a combined 42 times in their past two games, again struggled to limit miscues, committing 18 turnovers, including the costly pair down the stretch. But Maryland stuck with Syracuse behind its 47.8 percent 3-point shooting and a season-high 22 assists.

Syracuse (6-0), meanwhile, stayed in the game by controlling the block. The Orange scored 42 points in the paint and outrebounded Maryland, 39-33.

“Our downfall was defensively,” Huerter said. “We did not guard the way we were capable of guarding or the way we wanted to guard.”

After Syracuse entered halftime with a one-point lead, Huerter led the Terps. He nailed a deep 3-pointer with just over 12 minutes remaining to quiet the announced crowd of 20,852. The Orange followed with a 6-0 run before the sophomore nailed his fifth triple of the game, keeping Maryland within one point with about nine minutes left.

The teams traded leads the rest of the way until the Terps, who open Big Ten play against Purdue on Friday, failed to capitalize against the Orange’s zone when it mattered most.

“Take away all those turnovers and second chance points, things that we can clean up, we can become a good team,” Turgeon said. “Until we do that, we have some work to do.”