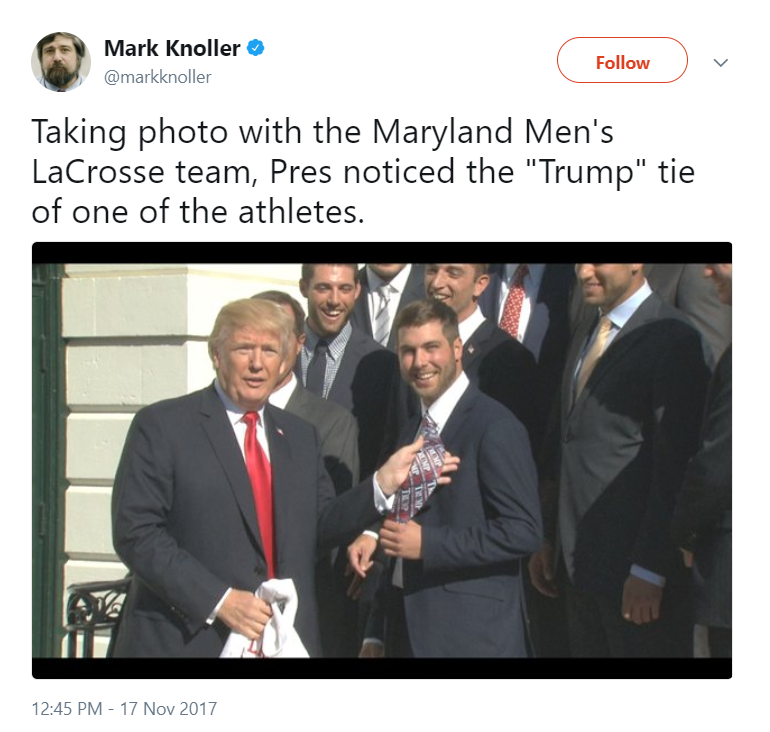 On Friday, the Maryland’s men’s and women’s lacrosse teams visited the White House, where President Trump honored both squads alongside one another for their NCAA championship victories.

While both teams took part in the usual pomp and circumstance with photos in the Oval Office and a tour of the south lawn, the men’s lacrosse team created a little bit more fanfare.

During the team photo with President Trump, head coach John Tillman introduced Dylan Maltz, who was sporting a tie with the commander in chief’s campaign sign printed on it. As expected, Trump quite enjoyed the gesture.

Taking photo with the Maryland Men’s LaCrosse team, Pres noticed the “Trump” tie of one of the athletes. pic.twitter.com/Kd28hezFG3

As seen in the tweet above, Maltz is quite the Trump supporter, and it’s shown on the player’s Twitter. The former Terps attacker wished a hearty congratulations to the president after his election victory last year.

His fandom even extends to sharing Trump’s skepticism of particular news organizations.

The women’s team had their fun with the president, too, as seen here laughing at a comment he made toward them.

Wow… this photo of the University of Maryland women’s lacrosse team w/ @POTUS today is AMAZING (they were laughing at one of his comments) pic.twitter.com/eUayoHp7F8 — Marcus Baram (@mbaram) November 17, 2017

Neither lacrosse team’s Twitter account has put anything out about their visit to the White House, besides team photos in the Oval Office without the president in them.

Other collegiate champions had the opportunity to join the Terps in visiting the White House. Men’s basketball national champions North Carolina did not visit because the team could not agree on a date with the administration, as first reported from the News & Observer.

The women’s national champions, South Carolina, declined to visit entirely to focus on their upcoming season, according to their head coach, but it’s worth noting the team was not officially invited until early November.

Whether a team will visit the White House has been a constant question asked of championship teams since Trump took office in January. North Carolina head coach Roy Williams did his best to avoid giving a direct answer after his team won the title, when he said, “Let me think on it.”

Other athletes have been more explicit. Stephen Curry and Kevin Durant were among players for the Golden State Warriors who outright said they do not want to go to the White House, which prompted this Twitter outburst from the president:

Going to the White House is considered a great honor for a championship team.Stephen Curry is hesitating,therefore invitation is withdrawn!

Whether the Terps went to the White House to take advantage of the “great honor,” or just to avoid a Twitter tirade from Trump, is up in the air. But one thing is certain: An angry tweet from the president would definitely drum up a lot of publicity for the upcoming lacrosse season in the spring.