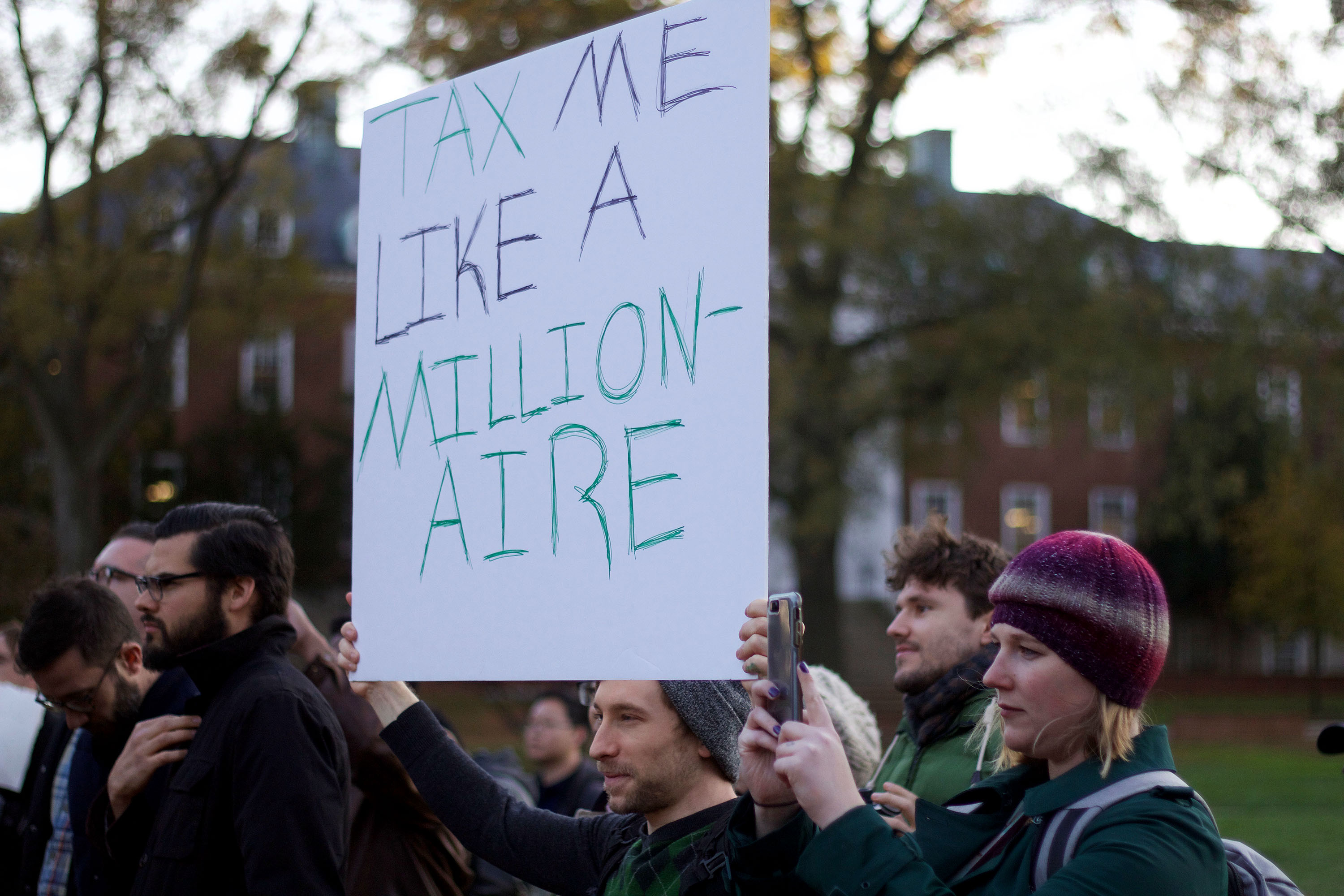 About 200 University of Maryland graduate students protested the tax reform bill that passed in the House of Representatives on Thursday.

The students gathered at McKeldin Mall to rally against the GOP’s Tax Cuts and Jobs Act, which would make tuition waivers subject to tax.

Event organizer Guy Aldridge, a second-year doctoral student in the history department, says the act places burdens on graduate students that would have significant negative impacts on this university “from head to toe.”

As it stands, the act would eliminate section 117(d) of the IRS code, which exempts tuition waivers from taxable income. It would also repeal a section that allows employers to offer paid assistantship positions to graduate students tax-free.

“Grad students are already not particularly well-paid and there are some gaps in terms of how they are treated as employees, so it’s important for us to come out to be heard and seen as a force that wants its labor to be respected and valued,” Eldredge said.

Of the nearly 11,000 graduate students at this university, 37.5 percent have assistantships, according to the graduate school website.

University President Wallace Loh and the presidents of 11 other academic institutions within the University System of Maryland signed a joint letter announcing their disapproval of the bill on Nov. 10.

“When you basically reduce the incentives for charitable deductions, or you go even a step further and you start taxing the incomes from endowments of private institutions, this is a clear attack on higher education,” Loh told The Diamondback.

The system released eight versions of the letter Monday addressed to each of Maryland’s House representatives so students could send them.

Steve Fetter, interim dean of the graduate school, also sent a letter to the Maryland Congressional delegation in opposition to the bill on Nov. 13.

“I urge you to vote against this bill so long as it contains this harmful provision, which would decimate graduate education as a driver of innovation and economic growth throughout the state and the country,” Fetter wrote in the letter.

Despite these statements from university officials, many graduate students at the rally demanded the administration be more outspoken in its repudiation of the bill.

“I’m happy that the chancellor [of USM] and the other presidents within the system signed the letter … but for me, this needs to be a top priority, and I don’t see the university presidents — in my view, at least — being vocal enough against [the Tax and Jobs Act],” said GSG Chief of Staff Caden Fabbi, who is also this university’s USM council president.

As the tax plan moves on to the Senate, Aldridge said it is a critical time for graduate students to raise their voices. Aldridge and Fabbi both said the immediate goal is to convince state and local legislators, in particular Gov. Larry Hogan, to openly condemn the bill.

“This really isn’t the end of anything so much as it is the beginning,” Aldridge added. “What we’ve seen in the past calendar week has just been really inspiring in terms of what we think grad students can accomplish.”