After living in substance-free housing at UMD, Carroll Hall residents commend the program 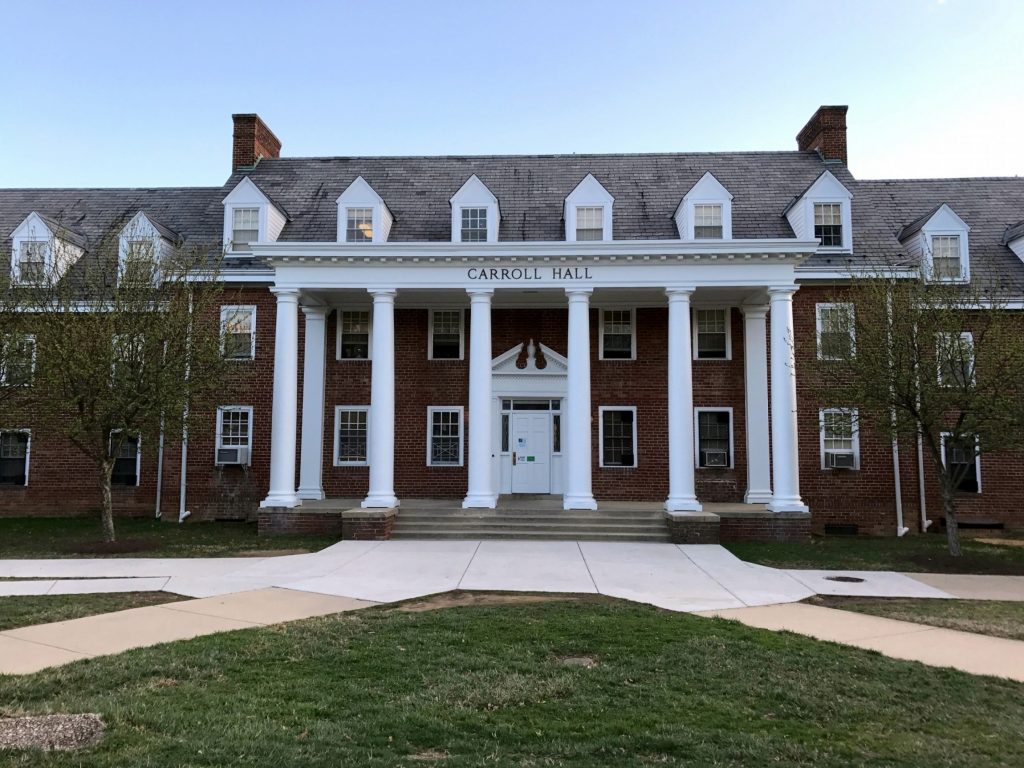 With the semester coming to a close, Carroll Hall residents have applauded the substance-free housing that the dorm offers.

The University of Maryland Department of Resident Life implemented a substance-free housing pilot program this semester in Carroll Hall.

This program was created in response to students who were seeking a living space free from substances like drugs and alcohol, said Erin Iverson, Resident Life’s assignments and public inquiry manager.

“This pilot program gives an additional option for those students,” Iverson said. “Our job is to make sure that all students coming to campus feel like they have a rightful place.”

Freshman information science major Berkeley Poulsen, a resident of Carroll Hall, said he didn’t want to live with the peer pressure that may occur in other dorms.

Poulsen added the success of the pilot program was “community-based.”

[Read more: UMD students will be able to choose a substance-free housing option for next semester]

“Everyone chose to live here for different reasons, but there are definitely a bunch of like-minded people in there,” Poulsen said.

Residents in Carroll Hall may have different backgrounds but are “united by a common bond” of living a drug- and alcohol-free life while in college, said Carli Weldon, resident director for Caroline, Carroll, Wicomico and Worcester halls.

Weldon said she is “beyond thrilled” by the program thus far, adding that there haven’t been any reported alcohol- or drug-related incidents in the dorm this semester.

Freshman psychology major Erica Patterson said she chose Carroll Hall because it was a less stressful dorm and she could avoid distractions like loud parties.

“The smell of drugs and alcohol makes me sick,” Patterson added.

The substance-free dorm is an added benefit to students who want to focus on studying and not partying, said freshman government and politics major Jacob Allen.

Resident Life maintains a substance-free policy for all dorms on campus, which all students agree to when they sign their housing agreement, Weldon said. Students over the age of 21 are allowed to have alcohol in their dorm.

Some Carroll Hall residents aren’t convinced that the pilot program has prevented students from drinking or using drugs.

“I’m not sure how this is different than other dorms on campus,” said Leo Samuels, a freshman enrolled in letters and sciences.

Students did not sign up to live in Carroll Hall, but instead were selected if they indicated an interest in substance-free living arrangements through the room selection process during the spring semester.

These students also completed a follow-up survey to confirm their interest just prior to room assignment period in April, Weldon said.

The number of new incoming students who stated they were interested in living in substance-free housing totaled 578 requests. Carroll Hall has 121 beds. Some students, who were part of living-learning programs, were assigned to rooms together in the dorms that house their programs. Others were placed together in dorms like Caroline Hall, Weldon said.

“We did try to cluster people together who wanted a similar community,” she added.

The dorm does currently have five vacancies, Weldon said, but none of the students who left the hall reported having issues with the substance-free program.

Weldon said she was confident the program would continue beyond this academic year. Discussions about expanding substance-free housing to other dorms wouldn’t begin until spring, she said.

“I am pleasantly surprised by how smoothly this fall semester has gone and I look forward to the spring,” Weldon said.

Patterson and other residents said the program should continue but suggested that Resident Life utilize a nicer, more modern dorm than Carroll.

“I would want to live in a similar dorm next year,” Patterson said, but added that she thinks Carroll Hall is “kind of trash.”

Carroll Hall, which does not have air conditioning in the rooms, opened in 1954, according to the Residential Facilities department website. The dorm is scheduled to be demolished in summer 2020, according to the Resident Life On-Campus Student Housing Strategic Plan. There are plans to build a new North Hill dorm, which is scheduled to open in fall 2022.

“Either way, the people are great,” Patterson said.