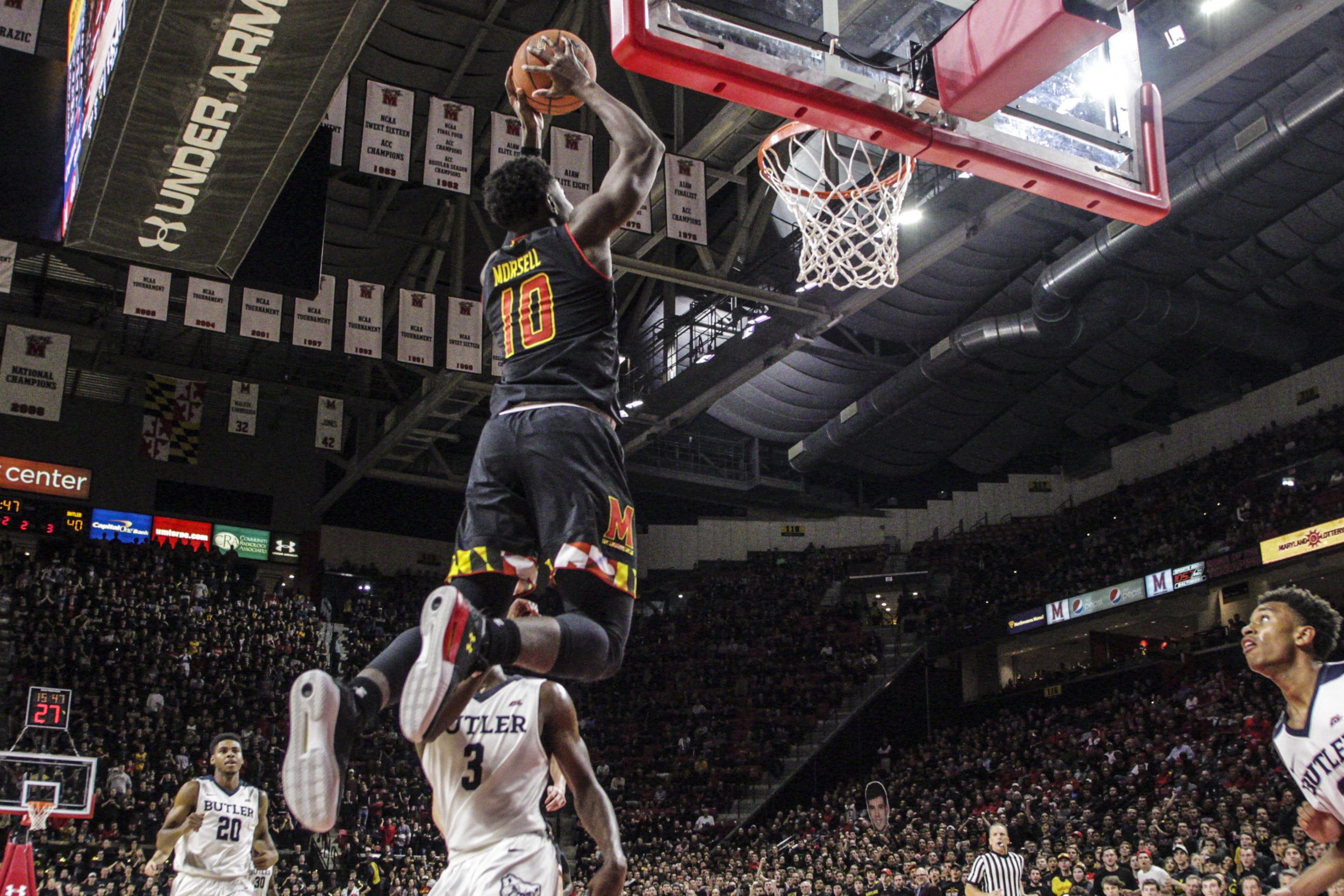 After Maryland men’s basketball’s 79-65 win over Butler on Wednesday night, Bulldogs guard Kamar Baldwin explained why it was so difficult to score in the paint against the Terps.

“They had some big guys in there,” Baldwin said, “so it was hard to get inside.”

At the end of last season, hardly any of Maryland’s opponents would’ve complimented the Terps’ size and physicality. The lack of both contributed to the Terps’ early Big Ten and NCAA tournament exits.

But with the addition of three physically imposing players in forward Bruno Fernando, guard Darryl Morsell and center Sean Obi, and with sophomores Justin Jackson, Kevin Huerter and Anthony Cowan gaining muscle, this group appears to have put last season’s problems behind it.

Maryland outrebounded Butler, 40-27, and responded to the Bulldogs’ shots near the rim with resistance. That bodes well for coach Mark Turgeon’s squad to compete with top Big Ten foes as it pursues its fourth consecutive NCAA tournament.

“We have had some finesse teams in the past, but this team has potential to grow,” Turgeon said. “We are much more physical, and it’s nice to see. We are boxing out better, rebounding better and guys are going after the ball.”

Since his first meeting with reporters this season on Oct. 21, Turgeon has assured his team would fix last season’s issues. The seventh-year coach said practices were more physical and intense.

While the Terps bullied Stony Brook and Maryland Eastern Shore in the paint, they didn’t face a real test until Butler, which has qualified for the past three NCAA tournaments.

Maryland averaged the fourth-fewest rebounds per game in the Big Ten last season as Jackson and Huerter led the squad on the boards. When center Michal Cekovsky fractured his ankle in February, Maryland struggled to score in the paint while losing the rebounding battle in four of its final five games.

Maryland’s depleted frontcourt rotation struggled to stay out of foul trouble as Jackson was forced to play down low. That limited the Terps offense to mainly pick-and-rolls with Cowan and former guard Melo Trimble — an offense that went stagnant in the second half of losses to Northwestern and Xavier in the Big Ten and NCAA tournaments, respectively.

The main differences so far have been a healthy Cekovsky and the addition of Fernando.

The Terps have fed the ball to their frontcourt players early in games, opening opportunities on the perimeter. Cekovsky and Fernando combined for 15 first-half points Wednesday.

“It gives our guards a lot more confidence,” Fernando said. “They trust us a lot more. They don’t hesitate to put the ball inside. They know they’re going to get it back. If not, we’re either going to drive and get a bucket.”

While Fernando has complemented Cekovsky’s offensive skillset with his athleticism, he’s also proved a force on the boards. Turgeon believes Fernando isn’t close to reaching his potential after nursing a preseason high ankle sprain.

“We were super physical tonight,” Cowan said. “Each big that came in tonight really gave us great time.”

Cekovsky and Fernando also combined for three blocks — each coming at crucial times to help hold the Bulldogs to 34 percent shooting.

“This team feels right defensively, and I think we are going to get better,” Turgeon said. “It starts in practice. I have to stop practice because they get after it.”

Maryland’s toughness might not be tested again until its game at Syracuse on Nov. 27, but Big Ten play begins later that week. The Terps will face off against some of college basketball’s premier frontcourt players, such as Preseason All-American Miles Bridges at Michigan State, Wisconsin’s Ethan Happ and Michigan’s Moritz Wagner.

Behind its rejuvenated physicality, Maryland hopes to compete with those players and reverse its recent postseason shortcomings.

“We’re playing a lot more physical than we did at this point last year,” Cowan said.