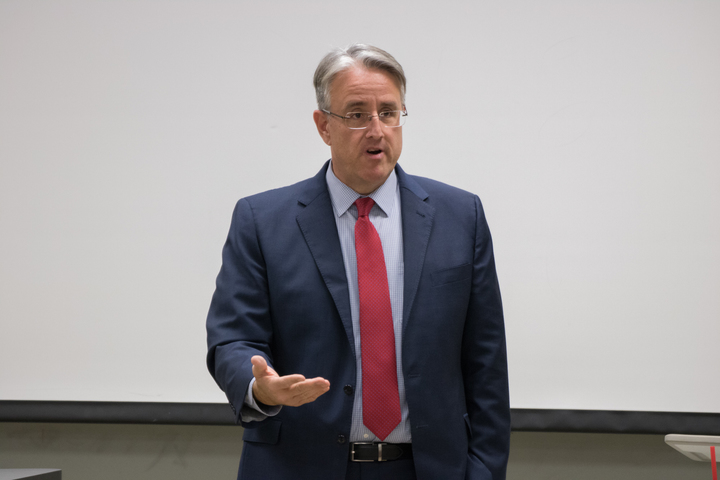 When Maryland Sen. Rich Madaleno was elected to the state legislature in 2002, he was told being out would destroy his career.

An openly gay man had never served in Maryland’s legislature before, and it was only in 2001 that the state barred discrimination based on sexual orientation.

“In your lifetimes,” Madaleno said to about 30 University of Maryland students, “we have gone from that to the point where we’ve now passed every anti-discrimination law … and even gotten so far as to get to marriage equality.”

Madaleno (D-Montgomery County), who ​formally ​announced his Maryland gubernatorial campaign on ​July 17, spoke in Tydings Hall on Tuesday night about being a gay politician, education issues and the democratic process.

The Maryland senator was the first guest of a speaker series joint-hosted by this university’s College Democrats and Our Revolution chapters. The group also plans to host gubernatorial candidate and former NAACP president Ben Jealous on Dec. 5.

Madaleno — who’s among eight Democrats launching campaigns for governor ​— was elected to the Maryland House of Delegates in 2002, where he served for four years before becoming the first openly gay man elected to the state senate in 2006. He now serves as the vice chair of the budget and taxation committee.

“It’s hard to believe it was not that long ago and how much life has changed,” Madaleno added. “People don’t even seem to care — like, ‘Oh yeah, you’re gay.’ It’s become so boring and normalized, which is fantastic.”

Madaleno addressed a tax reform package the U.S. House of Representatives could vote on within the next week that would count tuition waivers some graduate students receive for their assistantships as taxable income, calling it “crazy.”

Some students from this university have expressed concerns that the reform package would limit diversity in assistantships, bump them into higher tax brackets, force them to incur student debts or even end their education.

“We’re going to tax graduate students in order to give billionaires a tax break,” he said. “How does this make any sense for our country moving forward? It’s the lunacy that’s happening.”

Madaleno has also expressed support for a $15 minimum wage. Maryland’s minimum wage is currently $9.25 and is set to increase to $10.10 next year.

“We can have — and we will have — a $15 minimum wage for everyone, including people who work in restaurants and other jobs that are tipped,” he said.

The state senator criticized Gov. Larry Hogan, particularly regarding his veto of a sick leave bill in May and his attempts to cut funding from education.

Hogan vetoed a bill that would have required businesses with 15 or more employees to provide five days of paid sick leave each year for full-time workers. At the time, he said it was a “job-killing bill” that would “turn back the clock” on statewide economic improvements, according to The Washington Post.

In 2015, Hogan set off a controversy when he took $68 million that the legislature had earmarked for schools and instead used it to strengthen this state’s pension system, The Baltimore Sun reported.

“He’s just another average Republican like the rest of them,” Madaleno said. “With me as your governor, we will move forward with transforming education in our state.”

“Rich’s history of success in passing smart and progressive public policy — including his leadership role in making the freedom to marry the law of the land in Maryland — makes him the obvious choice for Marylanders,” Victory Fund President and CEO Aisha Moodie-Mills said in a press release.

Victory Fund is “thrilled” to endorse Madaleno, said Moodie-Mills, adding that while Maryland has had other LGBTQ gubernatorial candidates, he is the first to receive the organization’s endorsement.

While in the Maryland Senate, Madaleno has advocated for progressive issues. He sponsored a bill earlier this year that made Maryland the first state to have a law protecting Planned Parenthood funding from a potential federal cutoff.

Stacey Khizder, a spokeswoman for this university’s Our Revolution chapter, said because she’s from Montgomery County, she’s long been familiar with Madaleno, whom she describes as “very, very progressive.”

“There are a lot of other really great progressive candidates running for office,” the senior government and politics and psychology major said. “He’s definitely one of my favorite choices at the moment.”

“It’s great the message that he’s [pushing] forward on free community college for those who need it, education spending and other issues like this,” Williams said.

Williams, who interned in the Maryland Senate last session, said he often heard Madaleno speak over the PA system and loved many of the bills Madaleno was working on. But Williams added that he’s still interested in following the gubernatorial primaries because “there are a lot of really great candidates out there.”

Madaleno touted his qualifications for governor, including his nearly 15 years in the state legislature and his ability to get results on divisive issues.

“I have the skills and the experience to be able to hit the ground running as soon as I’m sworn in,” he said. “I don’t need advice as to how to put together a budget, I know what state government does, [and] I know where the money is coming from.”