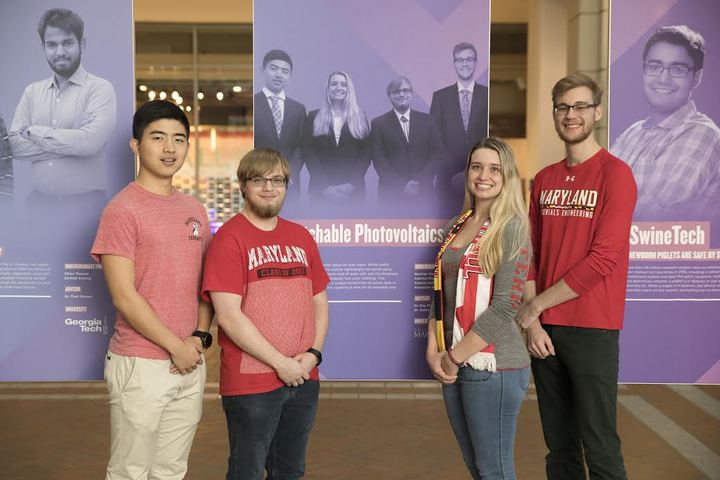 A team from the University of Maryland’s materials science and engineering department is in the process of creating a stretchable silicon solar cell, which has the potential to help people more easily obtain solar energy.

“This technology would be really good for someone who is looking to go off the grid or for military applications,” said materials science and engineering alumnus Gabriel Anfinrud, who is part of the team. “It can power a portable stove, radios, or even be put into clothing, tents or backpacks without having to carry about 60 pounds of spare batteries.”

A regular solar cell is an electrical device that converts sunlight into energy. But these devices can be rigid and heavy, Anfinrud said. With the use of stretchable silicon instead of metal, the solar cell becomes more flexible and lighter in weight, which can have enormous benefits for people in the army to people in third world countries, Anfinrud added. This is because it can give people in the army a lightweight way of charging their portable devices and give people in third world countries easier access to power.

The solar cell prototype can be folded, stretched, bent and flexed up to 80 percent before it breaks, Sabrina Curtis, a materials science and engineering graduate student who had the original idea for the creation, said. It’s about one-tenth the size of a human hair, which is 7 microns thick and 1 millimeter long.

For this technology to be usable in something such as a piece of clothing, thousands of the cells would have to be combined together, which could be beneficial for people to go hiking or for long treks abroad for people in the military, where individuals don’t have access to outlets and can’t carry heavy equipment for long periods of time.

Curtis, an intern at the U.S. Army Research Laboratory researching stretchable electronics, pitched her idea, taken from what she learned in the research lab, as the focus for an advanced microfabrication course taught in fall 2016 at this university. The project continued as a 2017 Capstone Senior Design project last spring, where the team received $750 to create a fabrication of the proposed technology.

Curtis said the success of this research project will open the doors for the creation of more wearable and portable renewable solar power technology. She said the flexibility of the prototype would reduce the need for heavy structural reinforcements and would allow for solar power to be on surfaces such as tarps, blankets and tents.

“It will be life changing to people in developing countries, where a constant source of power isn’t always accessible,” Curtis added.

The team was chosen to be a finalist out of about 500 teams for the 2017 Collegiate Inventors Competition, which took place last week. This was the first team from the university in 17 years to get to the finals, Anfinrud said. While the team didn’t place in the competition — each team that won an award is in the stages of commercializing its product, whereas this team just has a prototype — Curtis still cited the experience as beneficial.

Materials science and engineering graduate student Haotian Wang, also part of the team, wants to research stretchable batteries for his doctorate. That technology, combined with the flexible solar cell, is the team’s next goal, along with patenting the prototype.

The stretchable battery would serve as a power storage device for the stretchable solar cell, which can generate power but cannot save that energy to be used for later.

So far, the prototype has been building interest, and Curtis is hopeful that there could be a potential partnership between the team and the government. Last week the Director of Tech Transfer and Partnerships of NAVSEA, part of the U.S. Navy, reached out to the team saying he is interested in the project.

“When we initially started this, we thought it would be a fun little class project,” Curtis said. “Now 14 months later it has developed into a patentable invention, sparked two PhD theses, and hopefully will continue over the next few years into a fully developed product for military and commercial users.”