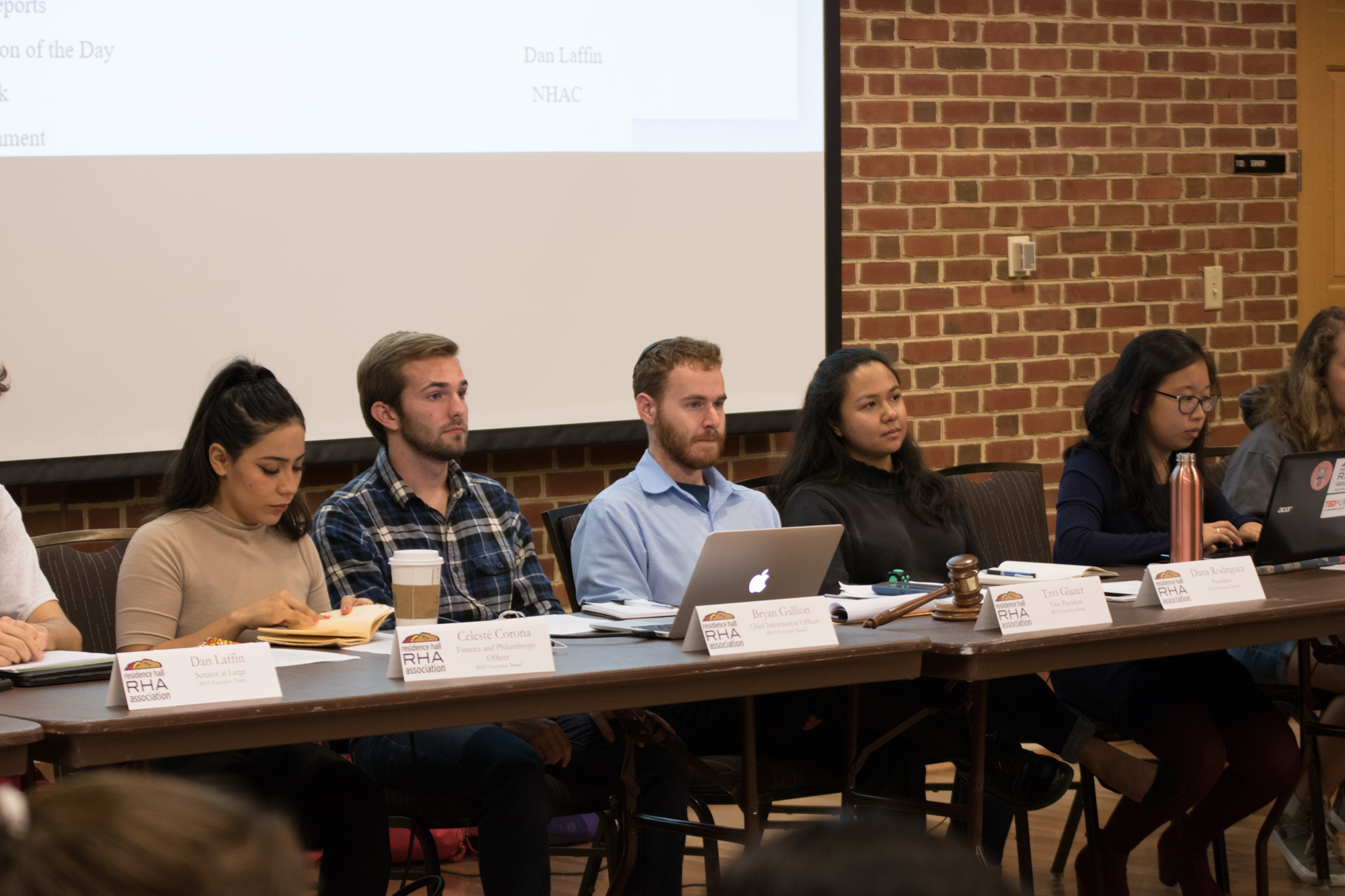 UMD RHA Executive Board at the RHA Senate meeting on October 24th 2017. The board was leading the discussions (Richard Moglen/The Diamondback)

After University of Maryland’s RHA Senate tabled a resolution last month that would have created an ad hoc committee to promote diversity initiatives in campus dorms, the senate voted in favor of a revised version of the resolution during Tuesday’s meeting.

The vote was 36-0 with no abstentions.

The resolution will create a Diversity and Inclusion Action Committee, which will be tasked with implementing actions to promote diversity through Residence Hall Association programming and policy and to “encourage a culture of inclusivity within residence halls,” according to the resolution document.

Recent hate bias incidents throughout dorms and other campus locations spurred the Resident Hall Association to craft the resolution. University Police identified and charged former university employee Ronald Alford in October with malicious destruction of property after a swastika was spray-painted on a campus trash cart in Hagerstown Hall.

In October, University Police responded to a Hagerstown Hall for a report of a swastika being drawn on a trash cart. Police also responded to reports of an illustration of a swastika in the North Campus Dining Hall’s men’s bathroom, along with a swastika found on the plant sciences building’s fifth floor balcony.

“We were concerned about our residents. We had heard a lot of voices in social media” and other sources, said senator-at-large and senior kinesiology major Cairan George, who co-authored the resolution.

The committee will focus on those students who do not feel affected by hate bias incidents, said resolution co-author and Senator-at-Large Daniel Laffin, who is a sophomore government and politics major.

“There is an overwhelming amount of people that say, ‘I’m not being attacked. I’m not being harassed. What do I care?” Laffin said.

Laffin cited a similar strategy used to promote sustainability on campus over the last several years.

“You see [recycling] posters all over. There are composting programs in almost every hall now,” Laffin said.

The senate voted to table the resolution at the Oct. 24 meeting after some senators raised concerns about the process of selecting committee members and how the second committee adviser will be chosen. Many senators wanted to take part in the committee and the senate wanted to ensure a fair application process.

Committee membership will be determined by availability and interest, according to the resolution document.

According to the RHA bylaws, any senate or council member may join the ad hoc committee so long as there are no conflicts of interest.

In the past, ad hoc committees, such as the Sustainability Committee — which was changed to a full standing committee in 2011 — have been created when a need is identified, George said.

The Sustainability Committee was changed to a full standing one because of its success over two academic years, according to the 2011 resolution document.

Aaron Hood, Department of Resident Life’s student leadership programs coordinator, will advise the committee. A second university official with experience addressing diversity-related issues will also advise the committee, according to the resolution document.

“We already have a task force of administrators who are already trying to do this. But we are the voice of on-campus students,” George said. “We want this to be a student-run committee. However, we do need guidance in how to focus our efforts and carry out this conversation.”