UMD’s sustainability office has been around for 10 years. Here’s what it’s done so far. 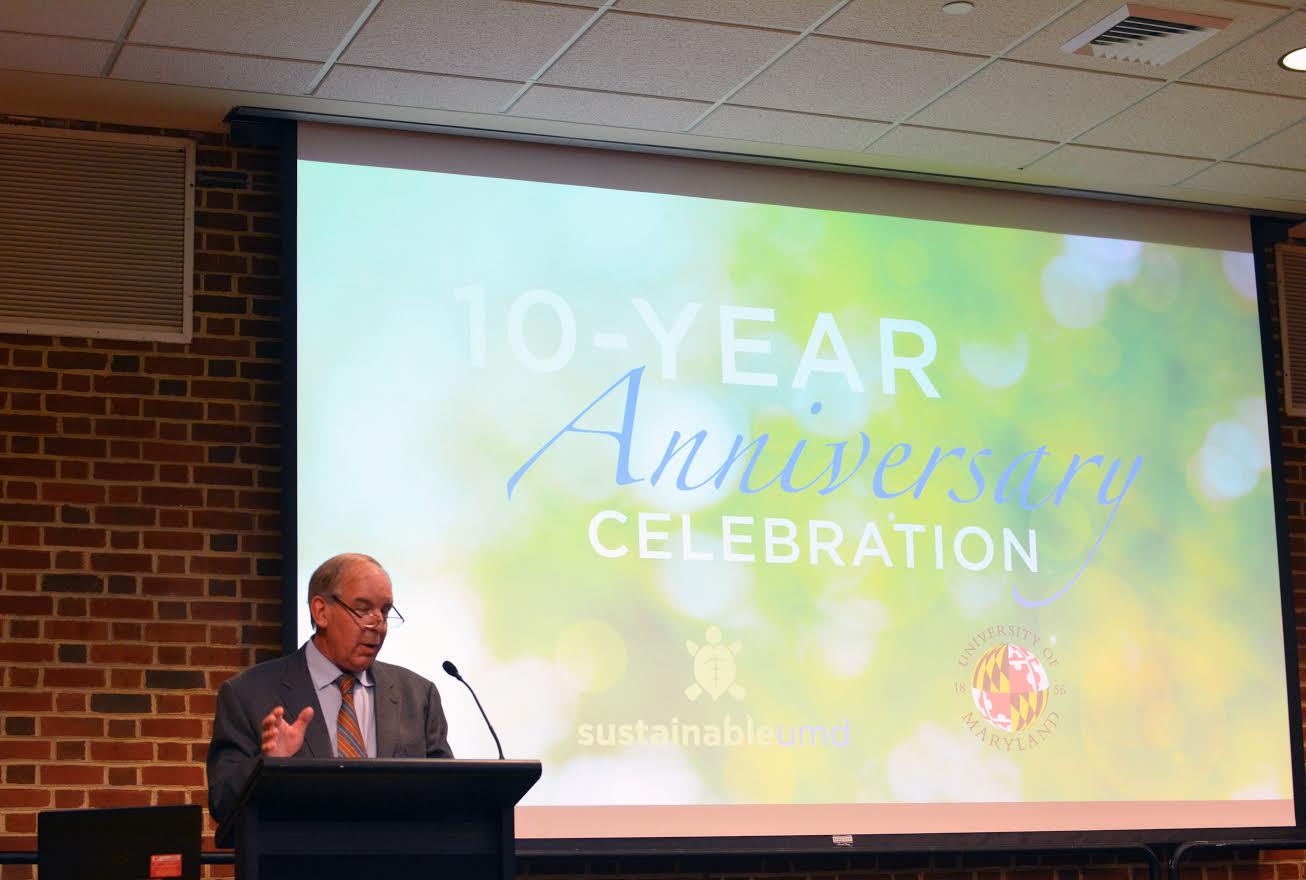 The University of Maryland’s Office of Sustainability celebrated its 10-year anniversary Monday, highlighting its expansion and progress toward campus carbon neutrality.

When the office was founded a decade ago, it had three staff members, said Andrew Muir, communications manager. Now, it’s looking to hire its eighth.

In the past 10 years, the office has helped this university decrease its carbon footprint by about 28 percent, said Mark Stewart, senior project manager for the office.

“The action that we’ve taken so far is like a mid-sized American town going carbon neutral,” Stewart said. “I’m really proud of the fact that we’ve made those sort of measurable achievements.”

The office and this university as a whole are working to reduce carbon emissions by 50 percent from their 2005 levels by 2020. In October, university President Wallace Loh announced further measures this university will pursue to meet its goal, including purchasing carbon offsets.

“We’re in a very aggressive period of climate action here, but I’m confident that we’re gonna get there,” Stewart said, acknowledging that it took a full decade to reduce carbon emissions by 28 percent. The office only has three years left to eliminate the other 22 percent to reach its goal.

Founded in 2007 following former university President Dan Mote’s signing of the American College and University President’s Climate Commitment, the office’s “first and foremost mission” is to make sure that this university meets the goals laid out in its climate action plans, Stewart said.

About 100 students and staff attended Monday’s anniversary ceremony. The keynote speaker, Scott Nash, founder and CEO of MOM’s Organic Market and a former student of this university, spoke to the crowd about environmentalism and the similarities between his business’s mission and this university’s Office of Sustainability.

“I think they’re rather parallel,” Nash said. “I think the university can do bigger things than we can. … It’s two separate models, but I think we’re on the same path.”

Scott Lupin, the director of the office, expressed pride in his office’s role in increasing the campus recycling rate from 17 percent in 2003 to 84 percent today. He also said that while renewable power was essentially nonexistent on campus at the time of the office’s founding, 86 percent of purchased university electricity came from renewable sources in 2016.

In addition to such achievements, Lupin cited the creation of the sustainability minor — which he said had the highest enrollment of the minors at this university 18 months after its inception — the Terp Farm and the Center for Global Sustainability as steps forward for the office.

“I think the thing I’m most proud of is the enormous network of people on the campus that have become involved in this issue. They’re not full time sustainability people, but they’ve taken it on as part of how they do their job,” Lupin said. “That’s really the most important thing of all.”

Stewart agreed that the voluntary environmentalism of students and staff has played a key role in the office’s success, especially in a time when the federal government is stepping back.

In June, President Trump announced the United States would withdraw from the Paris climate accord. Less than a week later, Loh announced this university’s participation in the “We Are Still In” coalition, pledging to continue working toward the goals of the international agreement.

“Since the election, we’ve seen a re-affirmation on campus of wanting to work on climate solutions,” Stewart said. “I think that its accelerated the work that universities, cities and individuals are doing on the climate side. We’re not alone.”

Frank Bohne, a junior agricultural science and technology major who attended the anniversary ceremony, said since coming to this university in spring 2016, he has noticed an upward trend in messaging that informs students about recycling and composting around campus.

“I think that’s really helpful,” Bohne said. “More people are responsive and knowledgeable about sustainability. I mean, it’s our future … everyone needs to do their part, and people need to know how to do their part.”

Moving forward, Lupin said the Office of Sustainability hopes to continue its efforts as a “model of a green university.”

“When I look to the next 10 years, I really have no doubt that the campus is going to double down on what it has already done,” he said. “The community is incredibly innovative, and I’m sure we’re going to find new ways to educate and engage with students about sustainability and how it relates to their lives.”