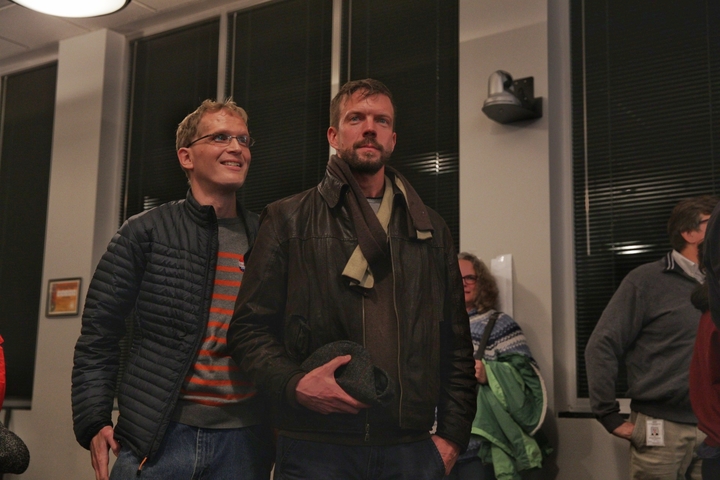 College Park Mayor Patrick Wojahn was re-elected Tuesday night, beating out three other candidates in the most contested mayoral race in city history.

Wojahn had received 1,568 out of 2,632 votes, defeating District 4 Councilwoman Mary Cook, District 3 resident Tom Chen and District 4 resident Zari Malsawma, according to the city’s Board of Election Supervisors.

The only race that couldn’t be called Tuesday night was the District 4 race, said Jack Robson, chief of the city’s Board of Elections Supervisors.

“Feeling great, feeling confident, feeling assured,” Wojahn said. “I’m glad and humbled that the voters have once again put their confidence in me, put their trust in me for another two years. I’m excited to keep on working for College Park.”

Before Wojahn ran for his first term as mayor, he served eight years as a District 1 councilman. He established the Neighborhood Stabilization and Quality of Life Workgroup and found College Park Day in 2010. His 2015 campaign platform focused on sustainability, development, improving safety and building on the city’s partnership with the University of Maryland.

He became the first openly gay man to be elected mayor in the city, winning its most competitive election in decades.

As mayor, Wojahn has said his proudest accomplishments include expanding the mBike program, supporting local businesses and forming the One College Park Coalition in 2016. He wants to continue working with the coalition to hold discussions about diversity in the city.

His 2017 campaign focused on issues such as transportation, sustainability, development in downtown College Park and addressed challenges in diversity.

Chris Keosian, student liaison for the College Park City council and a District 3 resident, said he voted for Wojahn, who he felt “would best represent the student body and be willing working with the [Student Government Association] and me over the next few years.”

“This is an issue near and dear to my heart,” Keosian said, adding that student-resident relationships, neighborhood quality of life, city-university partnerships, transportation infrastructure and on-campus tailgating are among the issues he believes are most important in this year’s election.

SGA President AJ Pruitt endorsed Wojahn for the mayoral seat, though the body as a whole did not endorse a candidate.

Rachel Ruisard, a musicology graduate student at the University of Maryland, voted for Wojahn.

“He’s only been in for two years, but I like what he’s been doing, and of the four possible candidates. I just liked how he presented himself and really felt I had the most confidence in him,” Ruisard said.

District 3 resident Jan Benton said she voted because it’s a right “we should never take for granted” and “it’s important to have a mayor and council that support what we look for in a community.” Benton voted for Wojahn after discussing candidates’ qualifications with her neighbors, determining Wojahn will best be able to “spur growth for our area and childcare and meet the needs of the citizens, including seniors.”

Cook described the results as “a referendum of the people.”

Chen declined to comment and Malsawma could not be immediately reached.