Mayoral candidate, landlord Tom Chen has had over 70 violations on College Park properties 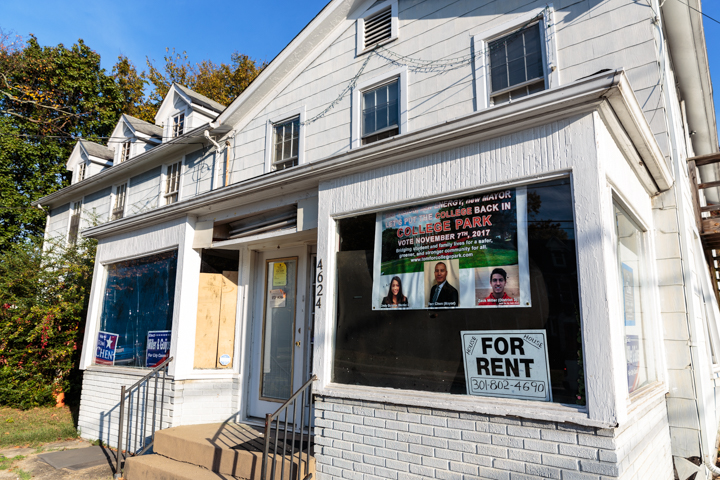 By Leah Brennan and Jack Roscoe

Tom Chen, a College Park mayoral candidate who has made his 22 years as a landlord a cornerstone of his campaign, has numerous code violations against his properties and has been repeatedly involved in legal disputes with the city he’s running to lead.

Most landlords in Prince George’s County have no code violations, said Lisa Miller, the president of the Prince George’s Property Owners Association. As of Sunday, according to city records, the five College Park properties Chen confirmed he owns have accumulated 71 violations over the past two years.

“I don’t want to speak on any people that are running right now — we really don’t do that,” Miller said. “But that would be a lot.”

The most recent property violation — litter at Chen’s 7504 Dickinson Ave. address — was issued Sunday, according to the city’s website. Chen also owns 4619 College Ave., 4622 College Ave., 4624 College Ave. and 7508 Columbia Ave., he said. Chen said he rents most of these properties to students in the community and listed the Columbia Avenue house as his home address in city election filings.

Chen’s listed home address has garnered 11 code violations in the past two years, according to online city records. During that period, none of the home addresses listed by other mayoral candidates — current Mayor Patrick Wojahn, District 4 Councilwoman Mary Cook and District 4 resident Zari Malsawma — had code violations.

Chen’s 4619 College Ave. property, which has received 16 code violations over the past two years, has also been the subject of an ongoing legal dispute.

The city filed a case against Chen on Feb. 18, 2005, after he continued construction on the property without the required site plan and permits, according to court documents.

In January 2005, Chen and his wife told the city they filed for a county building permit to make “extensive renovations” to the property, according to the documents. Before receiving this permit or making these renovations, they needed a special exception site plan from the county. They also needed a building permit from the city.

Despite having neither the site plan nor the permits, they continued with renovations that month, according to the documents.

City code enforcement officers posted stop work orders on the property at least three times. At least two were removed by Chen or someone working with him and work continued.

The Prince George’s County Circuit Court issued a temporary restraining order on Feb. 18, 2005, to stop work on the property, but it continued for another week, according to court documents. As of the date of the city’s pretrial statement on Sept. 30, 2005, no such permits had been issued.

When asked about the case Sunday, Kyriakos Tsoulfas, Chen’s assistant campaign manager, said he’d “have to talk to Tom.”

Chen did not respond to repeated requests for comment Sunday.

Suellen Ferguson, who represented the city in the case, declined to comment. Court documents say the case closed statistically on Nov. 9, 2005, and was entered into the system on Nov. 15, 2005, but online court records say the case remains active.

Chen has also been involved in legal disputes with former and prospective tenants of his College Park properties. One person who is involved in an active case against Chen declined to comment, and a former tenant did not respond to repeated requests for comment.

“I have no idea what goes on with Tom’s specific landlord dealings,” Tsoulfas said.

The former tenant filed a case against Chen in 2014, alleging Chen didn’t return his security deposit within the required time or notify him of damages to the property. State law requires landlords to return any money remaining in the security deposits within 45 days of the tenant moving out. The case was settled out of court.

Chen said Friday that his properties have so many code violations because of racism against him. Chen, who is Chinese-American, said he’s not the only nonwhite landlord who has been “tortured by [or] punished by” the city.

“The City strongly denies that its supervisors or employees have acted out of racism or other bad motive,” Bob Ryan, city public services director, wrote in a statement. “The City does not discriminate on the basis of race.”

Ryan wrote that many of the violations on Chen’s properties involved “significant public safety issues,” including the 4619 College Ave. property, which was declared uninhabitable in 2015 due to safety and fire code violations and a lack of building permits for construction. This property and Chen’s 4624 College Ave. property were each condemned from June 2015 to August 2017, Chen said. The 4619 property was recently re-opened, while the 4624 property remains uninhabitable and is still closed, Ryan wrote in the statement.

“Municipal infractions and zoning violation notices are issued by the City because a property is in violation of the law,” Ryan wrote. “Neither City Code enforcement officers, nor their supervisors, have issued or approved notices or citations to Mr. Chen for any other reason.”

Chen said the county has not found anything on his properties to condemn them, but the city has condemned some of them anyway. A Prince George’s County database detailing housing inspection violations since June 2014 does not include any of Chen’s confirmed properties.

Zack Miller, a University of Maryland student who is running for a District 3 council spot with Chen and fellow District 3 candidate Cindy Guijosa, listed his home address in city election filings as Chen’s 7504 Dickinson Ave. property. This property has accumulated 15 violations over the past two years. Miller did not respond to requests for comment Sunday night.

Tsoulfas said a lot of violations aren’t actually caused by the landlord, and they often happen because of student tenants’ actions.

Chen said College Park residents complain too much about students’ noise and trash violations. He said it is his “honor” and “duty” to help with trash cleanup and other neighborhood issues, but that violations are “normal, because you cannot be perfect.”

His campaign website says his “vision is to give back to the students as much as they have given to the city by appreciating and treating their opinions and concerns fairly as well as making changes that benefits them in every way possible.”

At the Student Government Association’s mayoral debate on Oct. 30, Chen said the city gives students “ticket after ticket” for “small, stupid” code violations, and that it needs to focus on “real crime,” such as murder and assault.

Wojahn responded to Chen’s comments during the debate. He called code enforcement a “tool for the students,” adding that when student housing is not maintained and develops issues, “these are not victimless crimes.”

“The maintenance of a rental property is important for many people, and the failure to properly maintain the property that somebody owns in the city … it hurts the tenants who live there, it hurts the neighbors, it hurts the community, it hurts our property values,” Wojahn said Friday.

“Well, I think [the record of code violations] speaks for itself,” he added, “and I think it’s better for me to let the voters tell their own conclusions about what it means about his concern for the community and what type of a mayor he would be.”