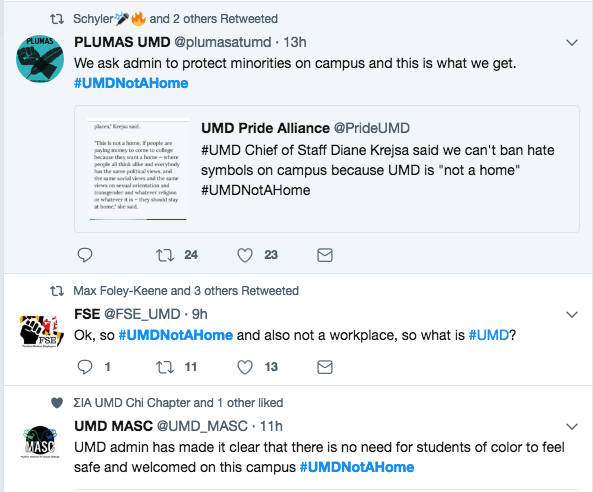 University of Maryland students took to Twitter with #UMDNotAHome after a university official announced on Oct. 25 that a campuswide ban on hate symbols would infringe on First Amendment rights, saying the campus is “not a home.”

“This is not a home,” said Diane Krejsa, this university’s deputy general counsel and chief of staff, during a University Senate meeting. “If people are paying money to come to college because they want a home — where people all think alike and everybody has the same political views, and the same social views and the same views on sexual orientation and transgender and whatever religion or whatever it is — they should stay at home.”

@presidentloh We think you all need to regroup, discuss and reevaluate who you allow to make your statements #UMDNotAHome pic.twitter.com/you5BCn0bo

Pride Alliance Director of Communications Riley Lynn Nairn said they were angry when they found out about the comments. It showed that the university administration is “unaware” and “out of touch,” they said.

“Almost all of my friends that I talk to every single day are going to the University of Maryland,” said Nairn, a senior Spanish major. “I live on campus. This is my home.”

So Nairn brought it up with other members of ProtectUMD, a coalition of student groups.

“That’s when we decided we needed to let people know this was the administration’s attitude towards hate symbols and we couldn’t let them sweep this under the rug,” they said.

“In spite of efforts that the university has publicly tried to make since the murder of Lt. Richard Collins III, since the noose last semester, since the white supremacist flyers went up all last year … things haven’t gotten better,” Nairn said. “I would argue that things have actually gotten worse.”

tl;dr UMD+its police won’t do anything until a crime has been committed, aka after humans have already been harmed or killed. #UMDNotAHome pic.twitter.com/loztejAicZ — jessica (@jluwrites) November 2, 2017

Racism, homophobia, & transphobia are not political or social views. It’s fucking hate and it has no place on campus period #UMDNotAHome https://t.co/8Gr35pam86 — … (@BolivianGringho) November 2, 2017

University Police Chief David Mitchell and Krejsa said misconduct such as vandalizing a building with a swastika can lead to punishment because such actions violates the Code of Student Conduct. However, hate symbols are expressions of views and don’t violate any conduct policy, they said.

Olivia Antezana, a junior psychology major, said banning hateful symbols should take a higher priority after Collins, a black Bowie State University student, was fatally stabbed on this university’s campus. Sean Urbanski, a white former student at this university, has been indicted on a hate crime charge and a count of murder in Collins’ death.

“It’s not even a hypothetical argument anymore,” Antezana said. “Like, we have to ban it before something bad happens. Something bad already did happen — someone died on campus.”

Antezana said the comments suggest “your identity is something that is up for discussion and whether or not you believe it to be true, people are allowed to have an opinion on it,” and are indicative of a larger problem in how the administration views some minorities on campus.

University President Wallace Loh said he wasn’t sure what Krejsa meant regarding this university not being a home to its students.

“I can’t speak to that,” Loh said. “In your own home, you can post anything you want. In a public place it’s a different matter. Maybe that’s what she was referring to.”

University spokeswoman Katie Lawson wrote in a statement that this university “regrets that these comments were misunderstood as unwelcoming.”

“Attorney Diane Krejsa’s recent remarks were part of a complicated discussion about the tension between the constitutionally-guaranteed right to free speech and the importance of creating a safe and inclusive campus environment,” she wrote. “We are working tirelessly to be a welcoming and inclusive campus for all. Krejsa’s comments were intended to highlight legal and other differences between a public university residence hall and a private home.

“In a university residence hall, students should expect to meet people who hold different opinions from their own and to talk about these differences. This is a valuable part of the college experience. We are proud that the University of Maryland is considered ‘a home’ by thousands of our current and former students,” Lawson wrote.

Loh backed the officials’ announcement that a university-wide ban of hate symbols wouldn’t be possible because it violates the law.

This university does ban hate and intimidation symbols at athletic events because they are “limited” spaces and must maintain a “family-friendly atmosphere,” Krejsa said at the meeting.

We ask admin to protect minorities on campus and this is what we get. #UMDNotAHome https://t.co/tbKRJRdvU1 — PLUMAS UMD (@plumasatumd) November 2, 2017

However, the rest of the campus is considered an open forum where bans on speech can’t be implemented, she added.

the point of #UMDNotAHome is that we don’t want hegemonic beliefs, we just don’t want beliefs that advocate for genocide normalized/valued — Lvl 21 Puppo @MFF (@ottdogbuns) November 2, 2017

Matthew Seibel, a senior Japanese and microbiology major, said the comments made them “super livid.”

“It’s basically saying that, ‘This isn’t your home,'” Seibel said. “‘You’re not safe here. You’re not welcome here. You should just leave that shit at home.'”

Seibel said many of the tweets point out the “hypocrisy in Maryland’s speech.”

“Maryland often says, ‘This is our home. Protect our house,'” they said. “Stuff like that. Yet they’re already saying this isn’t a home. You should leave that elsewhere.”

While Seibel said they could agree that differences in opinion can be good, they think allowing hate symbols and speech validates harmful ideologies.