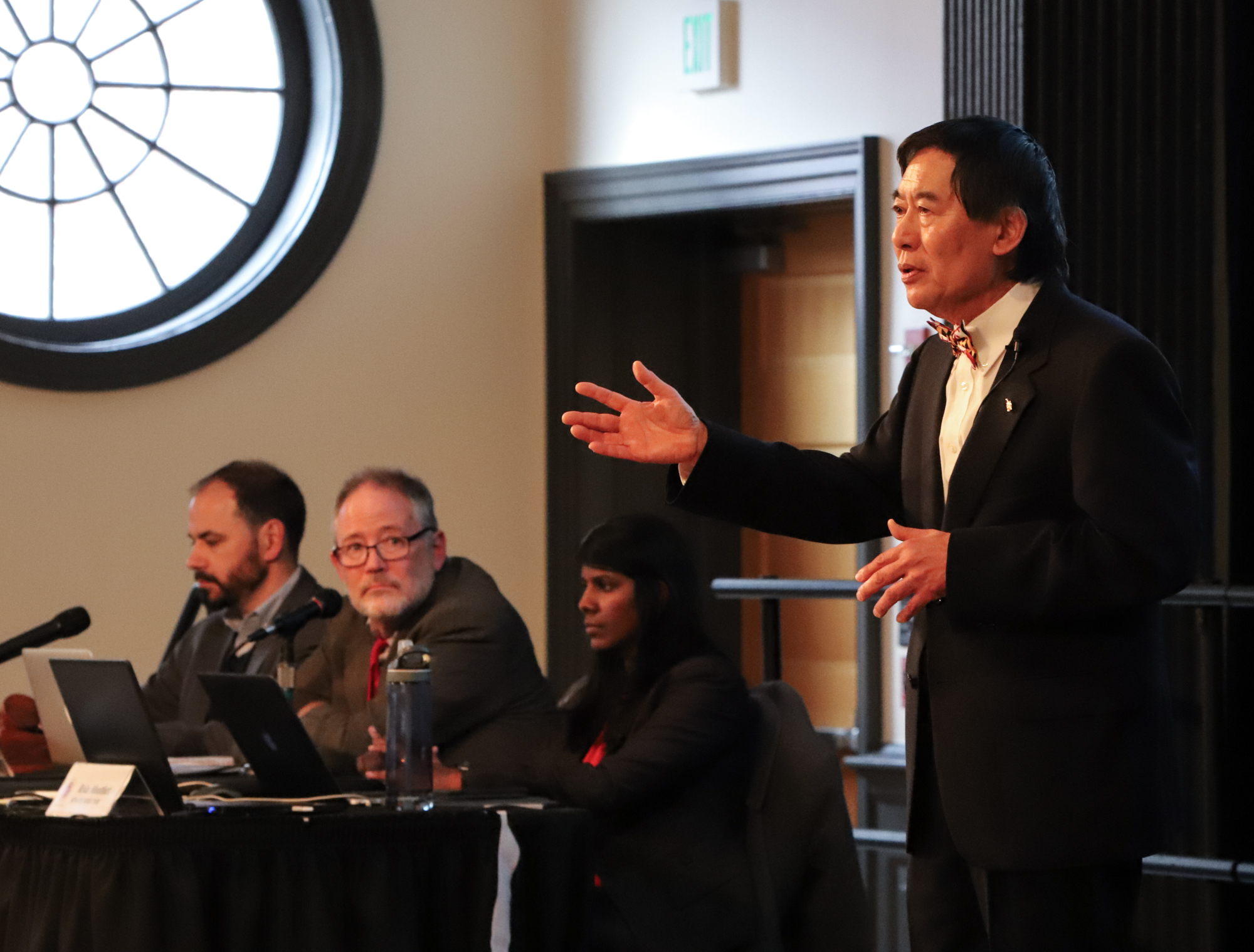 President of this University, Wallace D. Loh, gave his annual State of the Campus address in the Stamp Colony Ballroom on November 1, 2017. Loh's speech focused primarily on the continued development of the College Park community and the need for inclusion on and off campus. (Evan Kramer/The Diamondback)

After a series of recent hate bias incidents, University of Maryland President Wallace Loh called the school’s climate “charged, volatile and turbulent” during the annual State of the Campus address Wednesday.

“The question before us is, when the country is so polarized, so divided, and there is so much hate and bigotry and racism … how do you communicate with each other?” Loh said. “[That] climate filters down, not only to the campus, but also to the classroom.”

Loh discussed this university’s strengths — including partnerships with the University of Maryland, Baltimore, and the city of College Park — then addressed what needs to be done next to improve the campus atmosphere.

“The issue today, in my view, is not primarily the issue of diversity,” Loh said. “The issue is a question of inclusion.”

In the months after Collins’ murder, Loh tasked the Office of Civil Rights and Sexual Misconduct with keeping track of all hate bias incidents on the campus, and Chief Diversity Officer Roger Worthington will be promoted to a vice presidential position. The provost has also funded a Center for Diversity and Inclusion in Higher Education — which aims to find best practices — and this university plans to conduct climate surveys, Loh said.

This semester, Loh, his cabinet and campus deans have worked with the Anti-Defamation League. Loh added that he would like to expand similar workshops to the University Senate, students and other members of the campus community.

University Police have also reported several hate bias incidents that occurred in the past few months, including a swastika and “offensive drawings and/or language” in the men’s bathroom of the North Campus Dining Hall, a swastika spray-painted on a trash cart outside Hagerstown Hall, and a swastika and offensive phrase on a balcony railing of the plant sciences building.

In response to these incidents, the University Senate charged its Campus Affairs Committee with determining whether a campuswide ban of hate symbols would be possible, but officials decided that such a ban would not be possible, as it would violate the First Amendment.

The University Senate will host a free speech versus hate speech discussion on Monday.

“As we address this issue, this issue that tugs at the heart and the soul of America and higher education, we should also be asking, ‘Is this not only what we can do and cannot do, this is what we should do and should not do,'” Loh said.

In his address, Loh also discussed ways this university contributes to innovation and research.

This university, in collaboration with the University of Maryland, Baltimore, has raised $120 million in research funding, which “neither school could have generated on its own,” Loh said.

“We are not just a research university — we are [an] innovation university,” Loh said. “We want to apply that research to make an impact on society.”

A Fortune 100 company will soon come to College Park, Loh said, and a formal announcement will come in the upcoming weeks, aligning with this university’s 2020 vision.

During a Q&A session after the speech, Natasha Seraj, a biochemistry doctoral student, asked how this university provides support, help and mental health services to sexual assault survivors.

Loh directed the question to Linda Aldoory, the former director of the Herschel S. Horowitz Center for Health Literacy, who mentioned the office of Campus Advocates Respond and Educate.

Casey Cavanagh, an atmospheric and oceanic sciences graduate student, asked about an international student fee — which was implemented this semester — which he said did not align with this university’s efforts to promote inclusion but was instead “ostracizing” them.

He said the country’s political climate was “trickling down into the student body,” creating a toxic environment.

“I wish instead of just saying in these kinds of meetings, ‘I want to bring everyone together,’ to actually seeing some sort of further initiative, like meetings and seminars and things like that on campus,” Cavanagh said.

Loh said the fee was instituted to provide resources for the international students, including career services and English classes.

CORRECTION: Due to a reporting error, a previous version of this story incorrectly identified Linda Aldoory as the director of the Herschel S. Horowitz Center for Health Literacy. Aldoory was the center’s director between 2011 and 2015 and is now the arts and humanities college’s associate dean for research and programming. This story has been updated.