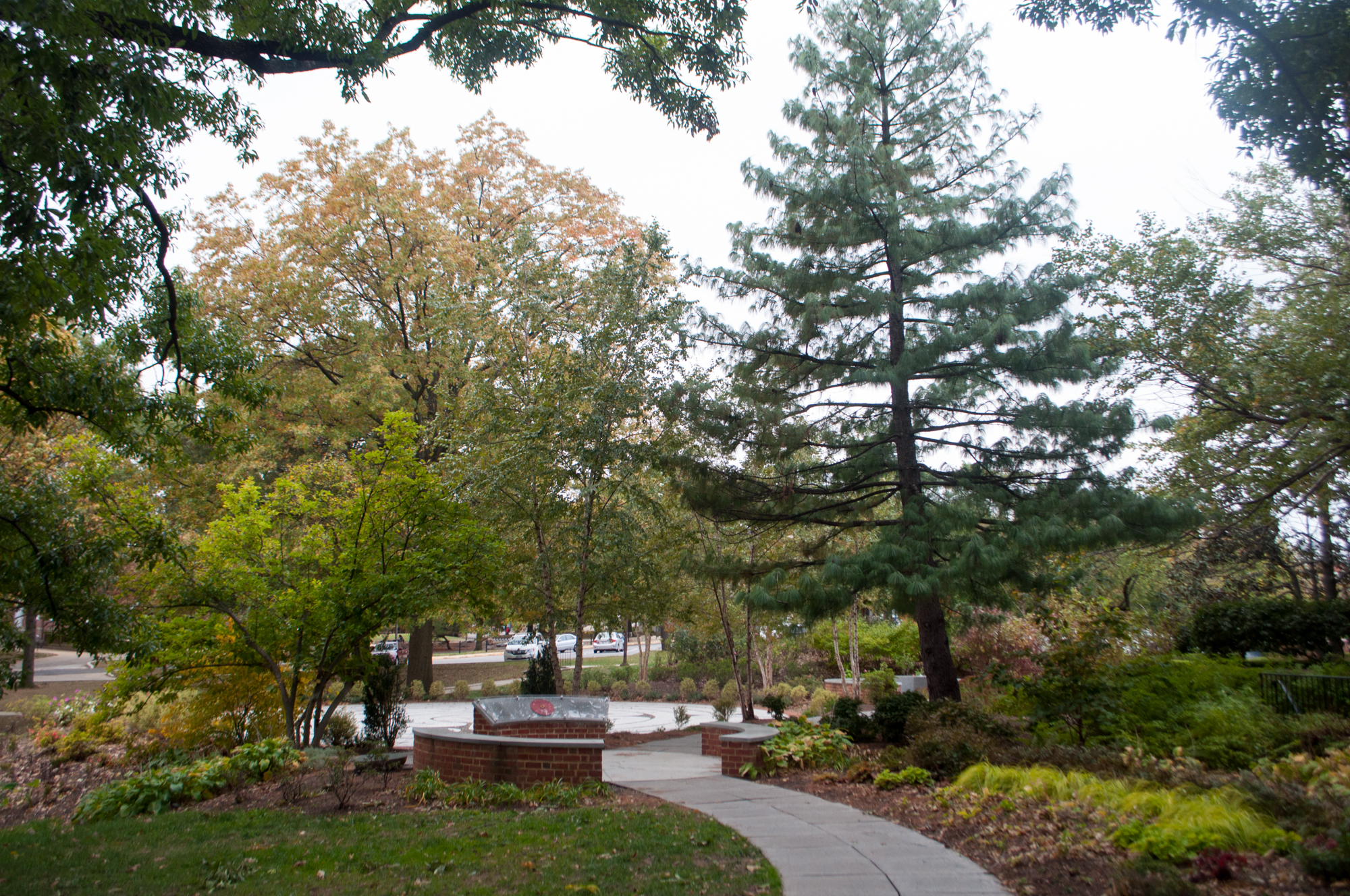 The Garden of Reflection and Remembrance at the Memorial Chapel. (Elliot Scarangello / The Diamondback)

Student Government Association legislators Ally Ewers and David Rekhtman proposed to implement a granite path leading to an existing bench in the Garden of Reflection and Remembrance outside the chapel.

At the foot of the bench, the granite will be inscribed with the message, “In Memory of The Students, Faculty, and Staff who are No Longer With Us,” according to the proposal.

The legislators decided to work on the proposal after speaking with an Ellicott Hall resident Avery Broseghini, who wanted to create a memorial in honor of Maria Fisher, said Rekhtman, the SGA’s Ellicott representative.

Fisher, a freshman who lived in Ellicott Hall, died earlier this semester after she was struck by an SUV on Route 1.

Broseghini, a freshman enrolled in letters and sciences, told Rekhtman a memorial would be helpful for people in the College Park community who may not be able to travel to the burial site of those who have died.

“I was thinking that a memorial of some sort would help create a place for students to get their feelings and thoughts out,” Broseghini said.

While Rekhtman and Ewers kept Fisher in mind, the legislators ultimately wanted a place on the campus that is “a general memorial so everyone can remember who they need to remember at that time,” said Rekhtman, a freshman biochemistry major.

“It’s kind of an issue because we’re all here, so you can’t fly home and go visit a memorial site or something,” Rekhtman said. “It’s nice to have something here to go and reflect.”

The legislators will request money through the Student Facilities Fund for the project, which is estimated to cost $3,750, said Denise McHugh, manager of the chapel. It will cost about $3,000 for paving and about $750 to inscribe the message.

Rekhtman and Ewers are requesting this amount from the fund for the Nov. 1 deadline, which was Wednesday, Rekhtman said. The student-majority subcommittee of the University Facilities Council will review the proposal. If it passes, the request will go to the facilities council and finally to this university’s administration for approval.

They hope to have the project completed by the end of the spring semester.

Representatives Noah Eckman, Andrew Stover and Kelsey Winters abstained from the legislature’s vote because they sit on the committee of the University Facilities Council that will review the proposal.

On Tuesday, McHugh signed a letter in support of the proposal. This letter also indicates support from the Student Affairs Division and Karen Petroff, assistant director of landscape services.

McHugh, who is an advisor to the memorial project, said having a place that is specifically dedicated to students, faculty and staff who have died at this university is a new idea to her.

“Periodically, [the chapel is] a space for individuals to come to mourn the loss of a student or staff member,” McHugh said. “But up to now, that’s generally been a part of a service that we have in the chapel or some sort of ceremony at the meditative labyrinth.”

It would be beneficial for students to have a memorial out of respect for the family and friends of people who have died at this university, said Erika Cornejo, a junior communications and French major.

“A lot of people don’t realize that there is an ongoing violence on campus and it’s kind of just ignored,” Cornejo added. “With the shooting at the bus stop, you walk by that and you don’t really think much about it.”

In May, Bowie State University student Richard Collins was killed at the Montgomery Hall bus stop. A white former student at this university was charged with murder and a hate crime in the stabbing.

Freshman biology major Hema Clarence said there are a lot of students who mourn at this university, even though not everyone in the campus community may recognize it.

“I think it would be really beneficial and good for mental health,” said Clarence. “Overall, [it’s] just a morale boost.”