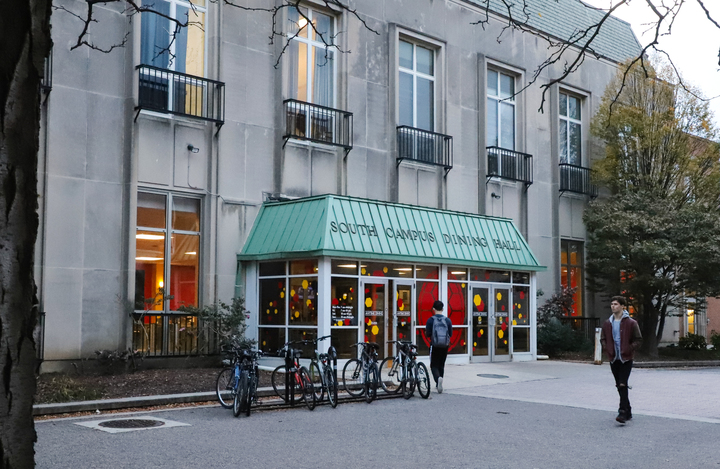 The University of Maryland’s Department of Dining Services introduced a system that uses QR codes and an online comment wall to establish better communication between students and staff.

The QR codes, printed on the plastic, triangular “pop-up” menus in the center of every dining hall table, have been in place since early September, said Dining Services spokesman Bart Hipple. Students who want to leave positive or negative comments or address concerns can scan the code and leave a message that dining hall management will review. But students didn’t know what comments Dining Services had read, Hipple said.

“We were missing an important piece in the comment loop,” Hipple said. “People who remained anonymous didn’t have any way to know that we had received and read their comments, and they couldn’t read what other people were saying.”

To solve this problem, he designed an online Facebook-style “wall,” which launched on Sunday. Messages and responses from all three campus dining halls are now published anonymously on the Dining Hall Comment Wall, and users can view more than 100 messages — which are stamped with the date, time and location they were written — that are visible on the site.

While Dining Services staff make minor modifications to some comments to remove personal details and profanity, the department has been able to publish every comment they have received so far, Hipple said.

Hipple said the opportunity for people to post comments about the performance of his department makes him feel “brave and a little vulnerable.”

“I don’t know what the reaction of students will be, telling the truth about how they see Dining Services,” he said.

One student left a comment expressing frustration over the “continually disappointing quality” of the South Campus Dining Hall’s grilled chicken. Another suggested fish and chips be added as a Terrapin Favorite, and another student wrote about a typical lack of hand sanitizer in dining hall dispensers.

The QR system and comment wall were designed in conjunction with the Residence Hall Association and the Dining Services Advisory Board, Hipple said.

Doron Tadmor, chairman of the advisory board, said he hopes the system will lead to a more open relationship between students and dining staff.

“This survey is a great channel for students who may or not be comfortable speaking to a manager about their concerns,” said Tadmor, a sophomore finance and international business major. “Dining Services is always very receptive to feedback.”

Hipple said the need for innovative modes of communication between students and staff has increased since this university’s switch to the Anytime Dining Program, which gives students unlimited access to dining services without counting points or swipes and was implemented last fall. In the past, Dining Services could easily tell what students liked and disliked based on what they bought, but the all-you-can-eat system requires a closer look.

Because the system is so new, the department and the advisory board are still analyzing its success and considering possible enhancements, Tadmor said.

At the start of the semester, the department received three main requests on a regular basis: breakfast served later than 10:30 a.m. on weekdays, more vegetarian and vegan options and greater accuracy on counter cards describing food items.

While the timing of breakfast is a “logistical wall” that leaves little leeway — staff has to start serving lunch at 11 a.m., leaving little room in between — Hipple said Dining Services’ executive chef is working to develop more meat- and dairy-free options, adding that issues with counter cards have largely been resolved.

Kat Pelosi, a freshman enrolled in letters and sciences, said while she supports the idea of the new communications system, “if it was a lot more visible then it would be a lot more helpful.”

Sophomore computer science major Deep Patel was intrigued by the idea of publishing the comments online but wary of its possible consequences.

“It’s a good idea so they don’t get the same concerns twice, so no one keeps flooding them with the same inconvenience that they have,” Patel said. “But if the comment is really bad or inappropriate, then I don’t think that’s a good idea.”

Hipple said it’s important to share all thoughts students have about the dining halls’ food or service. He hopes the comment wall will help improve students’ dining experience.

“In organizations in general, there’s a tendency to only show the good story and hide the problems,” he said.