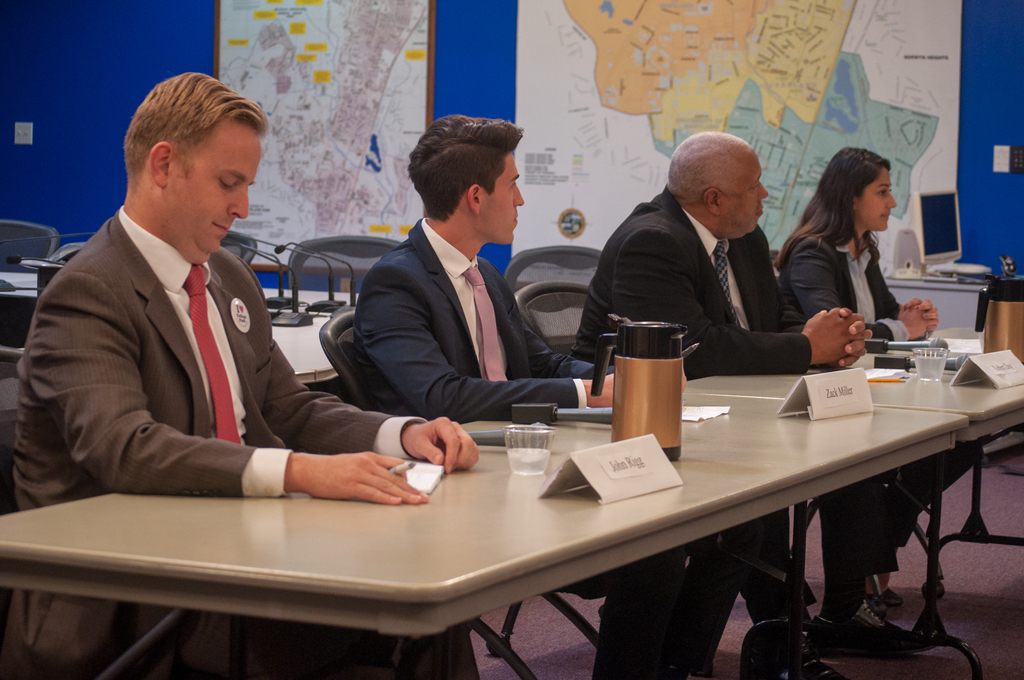 The candidates from distric three are introduced at the candidates forum on Wednesday, November 1st. (Elliot Scarangello / The Diamondback)

The moderator, District 3 resident and WTOP Radio anchorman Shawn Anderson, said there’s been several noise disturbances in Calvert Hills since the start of this academic year, and candidates discussed this issue and possible solutions.

Candidate Cindy Guijosa, a senior computer science and criminology major, proposed that the Interfraternity Council and Panhellenic Association deal with noise disturbances and address noise violations, saying she thinks this will be more effective because students would face consequences from their chapter’s national organization.

District 3 Councilman Robert Day, who is running for his fourth term, said noise disturbances are a “serious, serious issue” and that the community has to use every tool it has to tackle it, including filing Code of Student Conduct complaints. John Rigg, a candidate and former five-year president of Calvert Hills Citizen Association, said there has been some success with civic associations addressing excessively problematic houses, and that further blanket enforcement of laws for disruptive behavior has shown some promise.

The Code of Student Conduct would only stop individuals, not groups, said senior family science major and candidate Zack Miller, adding that IFC and PHA could put Greek life organizations on social moratorium so they can’t have other events, and “problem houses are stopped in their tracks.”

“When you have an IFC member or a PHA member come stop the party, [police] are able to stay and patrol around College Park, providing more safety for its residents — something that we can all agree upon,” Miller said.

Candidates were also asked to share their thoughts on the non-U.S. citizen voting measure, and its subsequent reversal, as well as the provision of an April charter amendment requiring six votes recently found in violation of state law.

Rigg — who said all residents should be able to vote, regardless of federal immigration status — said the mayor and council have accepted a lot of responsibility, and described it as a “goat rodeo.”

Guijosa said her parents came to the United States from Mexico as undocumented immigrants, and have since received citizenship. She said she believes non-U.S. citizens voting “dilutes the voices of those who are citizens” and believes noncitizens should have “non-voting representation.” Miller described the situation as “incompetency” and said voting should be exclusive to citizens.

“Incompetent in the fact that [the mayor and council] did not know their own charter, and in the second point, that it was even brought up. We should be proud to be Americans, and there is a democratic process which happens and you need to become a citizen in order to vote,” Miller said. “Everyone needs to learn to assimilate, and learn to love America.”

Day, who voted against the proposal, said he takes full responsibility for his part in not catching the error, and called the issue “intensely divisive.”

“Everyone has a voice in our city, and for us to say that they don’t — look at all the letters and emails and everything we received from our residents,” Day said.

Anderson also asked about the Plato’s Diner and Quality Inn site along Route 1, where the Bozzuto Development Company has proposed a $142 million complex. The company wants a quick decision on more than $10 million in city and county tax breaks to make it more financially attractive, he said, questioning whether candidates would support a tax break.

Rigg said tax breaks for development are “tricky.” The city wants high-quality development, and he said he has no idea whether $10 million is a necessary tax break, but promised a strong, analytic approach to whether those are necessary.

Guijosa said something needs to go in at the site quickly, but didn’t know if the tax break would be something to consider. Day said he was shocked when this proposal came before the council, because it is “an incredible amount of money.”

“This is something that is not just going to affect District 3 — it’s going to affect everybody in this city,” Day said, adding that they needed to consider potential city benefits, and not just developer benefits. “We do not need to rush into this to make any decisions that could down the road hurt the citizens of District 3 and College Park.”

Miller said he felt the tax break is a “message that is sent by this business to the current city council” that taxes are too high.

“We need to generate tax dollars, not through higher taxes on individuals, but by having a more business-friendly area where we can involve successful businesses that will then bring money to this area,” Miller said.