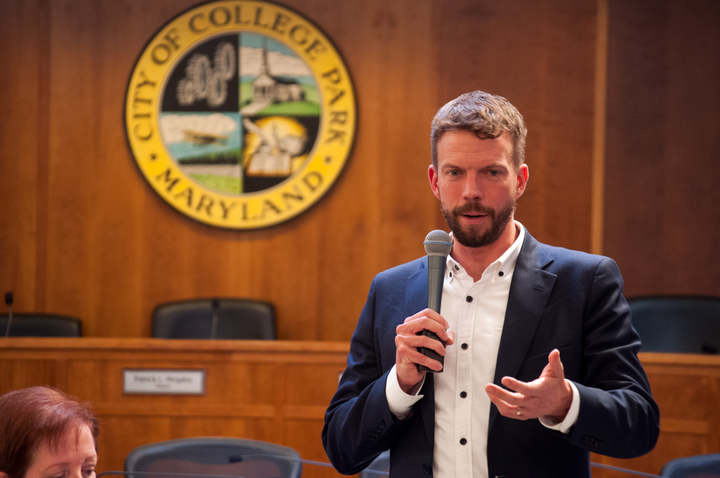 Patrick Wojahn, the incumbent mayor of College Park, addresses the audience at the candidate forum on Wednesday, November 1st. (Elliot Scarangello / The Diamondback)

Mayoral candidates were first confronted about a proposed charter amendment that would extend municipal voting rights to non-U.S. citizens. The measure appeared to pass at a Sept. 12 council meeting, but days later, city officials announced the proposal had not received the six votes required — a charter change that took effect in June — for a charter amendment to pass.

In an Oct. 18 statement, city officials said a legal review showed the six-vote provision violated state law, but the non-U.S. citizen voting measure still did not pass because it did not receive five votes. State law for a municipal charter amendment requires affirmative votes from a majority of a city’s legislative body — five members in this city — to approve charter amendments.

Mayor Patrick Wojahn stated his apology and said, “As a city, we’re all accountable.” District 4 Councilwoman Mary Cook, who is also running for mayor, said the subject was one that “was tearing our community apart,” adding that whoever is elected would do their due diligence in the future.

Candidate Tom Chen thought the council members and mayor involved “should all get fired,” and mayoral hopeful Zari Malsawma said the issue never should have come up, and when it did, it should have gone to referendum so citizens could decide.

Despite the candidates’ differing opinions, they agreed on one thing: none of them would bring the measure up again if they were elected.

Wojahn said conversation surrounding the proposal was divisive, and he would like to see the city celebrate its diversity and find other ways to include its population. Cook didn’t think it should’ve been brought up in the first place, and Malsawma said it was “foolishness” to allow non-U.S. citizens to vote in city elections. Chen said the proposal was “not acceptable” and said that “we need to respect our city, [and] we need to respect our charter.”

The debate also centered on the dispersion of city development and the police effectiveness.

College Park invests “significant resources” in the city based on what each unique district needs, Wojahn said. Cook said this issue is why she pushed for a strategic plan in 2008 and that the city needs to get back to a “real” strategic plan.

“What I wanted to see was a plan that was citywide that we could address development, we could address infrastructure, we could address amenities — all these things that we need in the city,” Cook said. “We still need to do that. We have what is called a strategic plan, but it’s more like a work plan.”

The city does not have its own police force, and Anderson asked candidates if the city needs its own.

Cook said she’s had multiple drug dealers in her Cherry Hill neighborhood, and “we chased every one of them out.” She’s not sure if the current arrangement needs to change — though she said a force “may be worth our dollars” — but will wait to decide until a city police study is released in November.

Chen emphasized the need for more contract police and said code enforcement should be cut down to fund more police for every district.

“It’s not acceptable — we keep seeing gunfire killing somebody and get robbed all the time, [and we] never see improvement,” Chen said. “People just keep talking, talking, talking [for] years, years and years. Nothing get[s] done. Nothing.”

Malsawma suggested trying one contract police officer for each district and rotating them, potentially monthly, before getting the city’s own force. Wojahn disagreed, saying a fairly-distributed police force wouldn’t make sense because officers should go where the crimes are.

“To me, that’s what community-oriented policing is all about. The police understand better where the hotspots are, where the problems are, where they need to be, then they’re more likely to go to those places and address the crime before it happens,” Wojahn said.