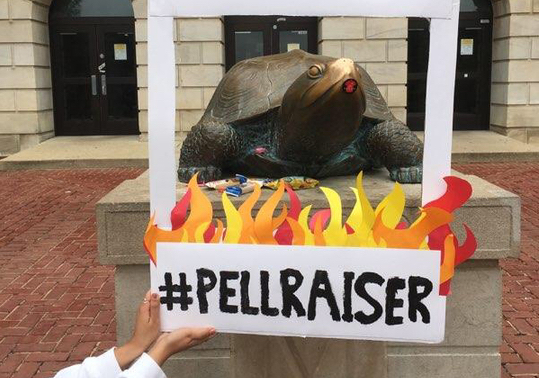 The University of Maryland’s MaryPIRG chapter has gathered more than 600 photo petitions in support of the Pell Grant program as part of its campaign to make college education more affordable.

The organization’s higher education campaign is focusing on two key issues: advocating to prevent further cuts to the Pell Grant program — which gives government funds to students to pay for college — and proposing a grant the campus administration would implement for professors to make open-source textbooks.

MaryPIRG has been tabling this semester to gather student photo petitions, which it plans to tweet in the form of a collage to Maryland’s U.S. senators with #PellRaiser starting on Monday.

“We as students on this campus care about Pell [Grants], and that should be on their radar and they should take that into consideration when going about making changes,” said Lauren Rather, the campaign coordinator.

The organization also plans to make a video with Pell Grant recipients, who will explain what their education and grants mean to them.

Gaurav Dahal, the campaign’s tabling coordinator, said a lot of students have been responsive to the group. MaryPIRG has tabled some eight or nine times for this issue this semester, and it has collected about 60 to 75 petitions a week, he added.

“A lot of students depend on this, so having it being stripped away or not a lot of people getting it is a big issue,” said Dahal, a sophomore chemistry major. “Even if you aren’t directly affected by it, you’ll still be affected by it through your peers.”

In the 2016-17 academic year, 7.1 million students received a Pell Grant, and there were $26.6 billion in expenditures, according to the U.S. Education Department.

Almost two-thirds of African-American and half of Latino undergraduates get support from the Pell Grant program, according to the Education Trust.

Dahal said he relies on a Pell Grant for his own education. Without it, he may not be able to go to school, or he would have to find a part-time job, which could potentially hurt his academic career.

“If anything happens to that, I might not go to school, or I’ll have to start working just to fund my college,” Dahal said. “I don’t have to work while I’m studying. I can focus all my time on college, rather than finding a way to fund my [education.] It allows me to focus more on my studies rather than other stuff.”

The group has also been making progress on its textbook affordability campaign this semester to combat expensive books, said Rather, a junior psychology major.

“Some students even abstain from buying textbooks because they can’t afford it, which can set them back in their classes,” Rather said.

The Maryland General Assembly also passed a bill in April that would provide a $100,000 grant to the University System of Maryland’s William E. Kirwan Center for Academic Innovation to support using more open-source materials.

To assess professor support, Rather said, the members plan to send out a survey next semester after forming a database of professors’ emails this fall.

The members say many professors have seemed supportive in preliminary talks.

“Pretty much every professor I’ve met with has said they would support open-source textbooks and students,” said Adam Karbeling, a junior English and government and politics major. “A lot of people empathize with the issue because everybody here is directly impacted by textbook prices.”