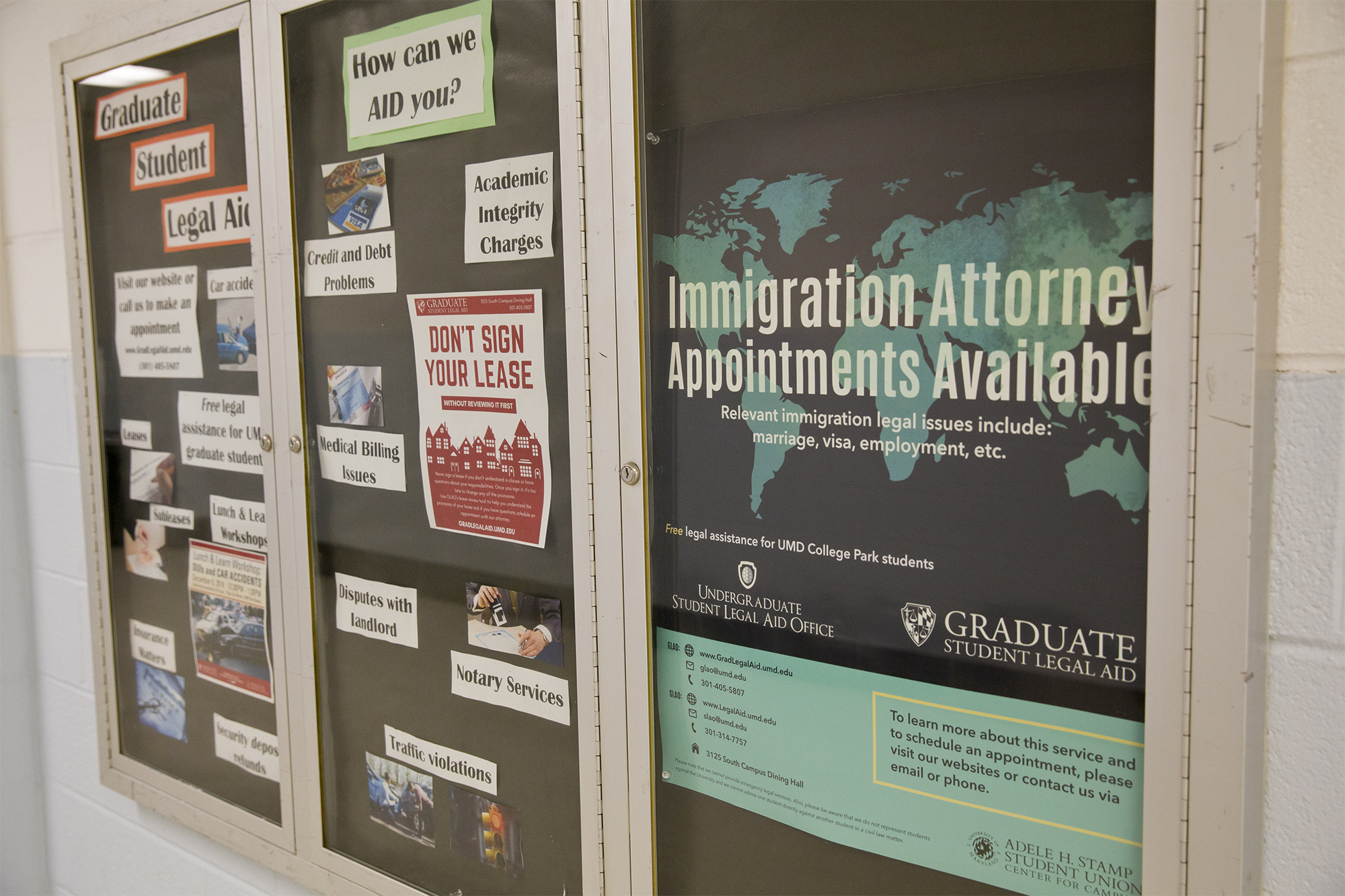 ProtectUMD is advocating for University of Maryland to hire a full-time immigration lawyer to help students affected by the end of DACA, as well as other Trump administration policies.

Some student activists say this university’s legal services for immigration are not enough to meet the students’ needs following the Trump administration’s announcement that it would be ending the Deferred Action for Childhood Arrivals program, which allows immigrants who came to the United States as children to work and study in two-year blocks.

Once a month, this university’s undergraduate and graduate student legal aid offices offer up to eight total appointments with an immigration attorney for the entire campus. Students may make only one appointment per academic year.

“This is simply not enough to match the need of an actual immigration attorney hired by the university,” said Madelyne Ventura, this university’s Political Latinxs United for Movement and Action in Society chapter president.

As of this fall, there are 132 students at this university covered under DACA.

In September, Trump announced travel restrictions for country leaders of Venezuela and their families, and citizens of North Korea and Chad in addition to five predominantly Muslim countries included in his original ban. Sudan was removed from this list.

The fate of Temporary Protected Status, which protects immigrants from deportation if their home countries are not safe to return to, is also unclear for some countries.

While this university’s undocumented student coordinator, Laura Bohorquez, can assist and advise students on some issues, she is limited with legal advice, said Ventura, a senior mathematics major.

“It would have been much more helpful and easier to the students if we had someone designated to deal with those types of things,” Ventura added.

ProtectUMD, a coalition of student organizations on the campus, plans to craft a proposal that would include student testimonies for the position and present it to the campus administration. Before issuing the proposal, the coalition also hopes to meet with administrative officials, including Chief Diversity Officer Roger Worthington, to discuss how the proposal could be implemented.

University President Wallace Loh said the administration is not yet “at the point of considering a full-time lawyer,” but that it needs to explore the option.

Loh cited two potential issues with creating the position: getting the state’s support and the absence of a law school at this university.

While this university hosts panels that include lawyers to provide information to students, offering personal legal services, including court representation, would be a different matter, Loh said.

“A legislator can say, ‘Well, you know, there are a lot of poor students who need help with divorce,'” Loh said. “‘Are you going to provide them with a lawyer to represent them in court?’ … Now, this is different — this is not divorce. But, you see, the difference is that we don’t have a law school.”

Other universities with law schools have students who can represent clients on a pro bono basis as part of their training, Loh said.

Loh, considering the possibility of partnering with the University of Maryland, Baltimore’s law school to provide this type of service, said, “Somebody needs to pick up the phone and go and talk to them.”

“I’m not saying we cannot do it,” he continued. “We need to explore it, but my sense is that most of the need right now is information. … I’m extremely supportive of whatever can be done to enable the Dreamers to stay — not just stay — but be able to find a path towards naturalization.”

Chikadibia Enekwe, an immigration lawyer in Upper Marlboro, said monthly appointments may not be enough to meet students’ needs.

“Before the end of the DACA, that seemed logical,” Enekwe said. “Because of the changes happening right now, I mean, the students will need more … help than they did before. They’re not only asking basic questions.”

Many students covered by DACA may need to adjust their statuses before the program ends, Enekwe said, by taking measures such as applying for special immigrant juvenile status if they are under 21 years old or having a green card-holding family member file for them to adjust their status, among other options.

“DACA students cannot navigate it through by themselves,” she said.