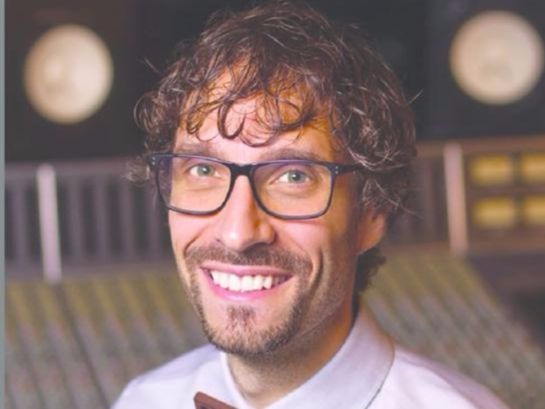 Multi-platinum award-winning audio engineer IRKO turned his dad’s garage into an in-house studio. He started DJing from the small set up, eventually transitioning into mixing audio for musicians.

“It’s always kind of funny for me to be in front of the mic, as I spent 20 years of my life behind the mic,” he said, walking onto the stage.

When he was younger, there wasn’t much of a hip-hop scene in Italy. He gravitated to the genre because of the heavy-hitting “boom-bap” drums. He also learned English this way, and he would DJ at the U.S. Air Force base 45 minutes from his home.

“Italy is known for art, for design, cars, of course, but not exactly rap music,” he said.

IRKO got his big break after obliging a Tokyo-based producer’s invite to New York. Three weeks later, he had a platinum credit on Jay-Z’s Kingdom Come album.

Now, he’s worked with some of the biggest names in music: Jennifer Lopez, Common, Kid Cudi, Kanye West, David Guetta, Rick Ross and Pitbull, as well as artists in places such as Guatemala and Astoria.

IRKO’s journey encouraged many aspiring artists in the audience to stay motivated and dedicated.

Nick Arnold, a senior at the University of Maryland, moderated the event. He founded the Terrapin Record Label with Maryland alumnus Mike Houser, and serves as president. He met IRKO when Terry Edwards, his audio engineering professor at the Community College of Baltimore County-Essex, introduced the pair. Arnold is a guitarist, and said his talk with IRKO taught him to “just keep trying at the thing you can’t do.”

Rapper Al Maralen a student at this university performed several of his songs following the discussion, including “Sad Face” and his new single “Moments.”

He said he learned the importance of testing audio on many different platforms — headphones, speakers, the car.

IRKO’s process is a detailed one. He typically has three different mixes of a song: the original, the final cut, and something in the middle where the sounds are distorted. His equipment these days is almost all digital, a far cry from the bulky sound compressors he started out with.

He works with artists, producers and label executives to get the perfect sound, sometimes being pulled in different directions, and has a continuous cycle of listening and tweaking until it is absolutely precise.

“Whenever your song is being played next to Kendrick Lamar, for instance, at a show or DJ set, you’re going to sound uber weak,” he said.

Marcus Munroe, a junior at Towson University, sings, produces and writes his own music. He needed a quick pointer on the best headphones to mix with (Bose) and said his biggest takeaway was that his dreams are “possible.” When Uncle Iso, Al Maralen’s DJ, asked about the best approach to mixing a song to perfection, IRKO had simple advice: “Hire me,” he joked.

CORRECTION: Due to an editing error, a previous excerpt of this story incorrectly stated that IRKO is the co-founder of Terrapin Record Label. Nick Arnold and Mike Houser are the co-founders. The excerpt has been updated.