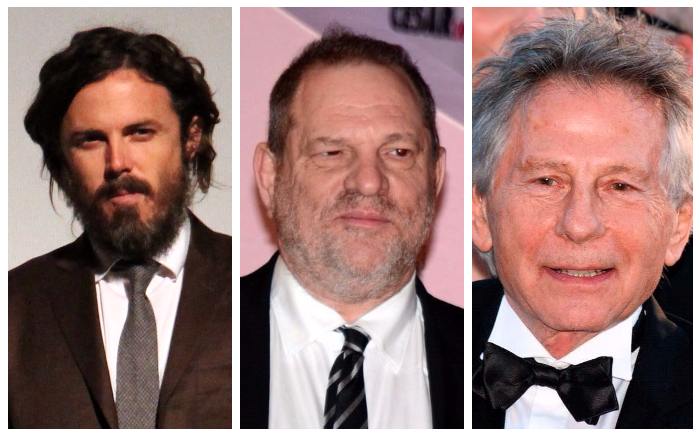 The Academy of Motion Picture Arts and Sciences decided to expel Harvey Weinstein earlier this month after numerous women accused the Hollywood producer of sexual harassment and assault. The academy released a statement saying, “We do so not simply to separate ourselves from someone who does not merit the respect of his colleagues but also to send a message that the era of willful ignorance and shameful complicity in sexually predatory behavior and workplace harassment in our industry is over.”

But Weinstein is far from the first celebrity to come under fire for this type of behavior while still receiving recognition from one of the most highly esteemed organizations in cinema.

In 1977, Roman Polanski, a French-Polish Holocaust survivor and director of Chinatown and Rosemary’s Baby, was arrested and admitted to sexually assaulting a a 13-year-old girl. Polanski pleaded guilty after agreeing to a plea bargain. In 1978, Polanski fled to France, where he holds citizenship. Earlier this week, another woman came forward, alleging Polanski assaulted her in 1975, when she was 10.

In 2002, Polanski won the Academy Award for Best Director for his movie, The Pianist. He could not accept the award in person because he remains in France. He has been nominated for three Academy Awards since 1978.

In 1992, filmmaker Woody Allen’s adopted daughter, Dylan Farrow, told her mother, Mia Farrow, that Allen had sexually abused her. In 1993, the case was pursued no further, as both the state and Mia Farrow claimed they didn’t wish to put Dylan through anything more. Allen admitted to having an affair with Soon-Yi Previn, another adopted daughter of Mia Farrow, who was an adult at the time. Previn and Allen married in 1997. In 2014, Dylan Farrow wrote a piece in The New York Times detailing the abuse.

In 2012, Allen won the Academy Award for Best Screenplay for his movie, Midnight in Paris. Angelina Jolie accepted the award on his behalf. He has been nominated for eight other Academy Awards since 1992.

In 2017, Affleck won the Academy Award for Best Actor for his movie, Manchester by the Sea. It was his first Academy Award nomination since the allegations. The award was presented to him by 2016’s Best Actress winner, Brie Larson, who portrayed a victim of rape in Room. At this year’s Academy Awards, Affleck will present the Best Actress Oscar.

Weinstein won the Academy Award for Best Picture in 1998 for producing Shakespeare in Love. He was nominated once more after that.

This year, Harvey Weinstein was fired from his own company after countless sexual harassment and assault allegations from the past several decades came to light. Weinstein may not be the first star to face this type of accusation, but he is likely the most powerful. If this kind of behavior is truly over in Hollywood, it is up to the academy to condemn it.