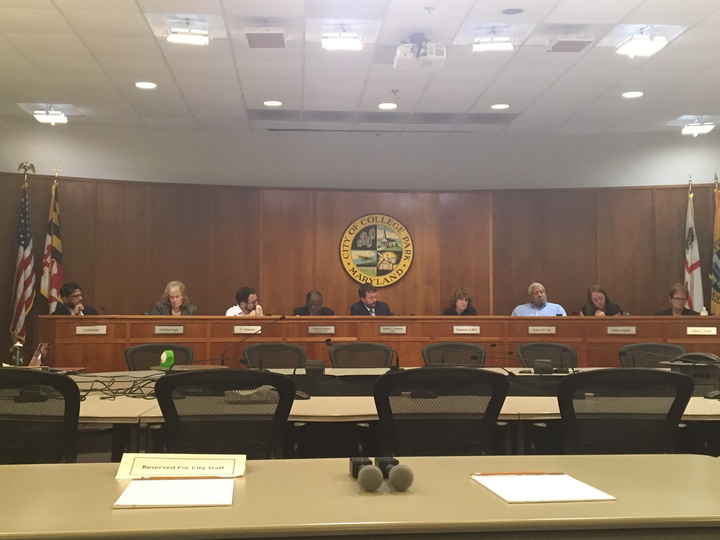 “I think high quality transportation infrastructure is vital to any city, especially when you consider the number of commuter students that the University of Maryland has,” Chris Keosian, the student liaison, said after the meeting. “The 495 interchange is a vital way for many students to get to campus, and anyone who has ever sat in that lines knows how dreadful it can be. So, I appreciate the city’s remarks to the secretary, and I hope that the administration will listen.”

The draft investment program, known as the Consolidated Transportation Program 2018-23, was released within the last few weeks, Mayor Patrick Wojahn said before the meeting. The document “includes transportation projects of interest to the City including funding for [Route 1] reconstruction, the Purple Line and bicycle and pedestrian infrastructure,” according to the meeting’s agenda.

The letter included requests for funding and starting the design and engineering phases for College Park Route 1 corridor improvements in segment two — between University Boulevard and Hollywood Road — as well as asking the State Highway Administration for funding for safety improvements on the Capital Beltway at the Route 1 Interchange.

“We’ve been very patient over the years in waiting for this to happen and Baltimore Avenue in College Park is long been in need of serious consideration. There are intersections that are seriously jammed up, especially during peak times,” Wojahn said about the corridor improvements before the meeting. “There are places that … [people are] not walking along because they’re not safe, we’ve managed to get some improvements done like the new sidewalks in North College Park, but what we really need is a comprehensive approach to the corridor, and the sooner we can move forward with that, the better.”

Issues on the Capital Beltway at the Route 1 Interchange include back-ups, delays and intersection blockages, and crossing from the community to the shopping center on the west side of the interchange is dangerous for pedestrians, the letter read.

Route 1 improvements to segment one, which is between College Avenue and University Boulevard, are scheduled to begin in 2018. The improvements include roadway widening and adding a 4-foot shoulder for bicyclists, as well as converting a five-lane section between Lakeland Road and Route 193 to a four-lane section with a raised median.

According to a 2014 State Highway Administration newsletter, as a result of the scheduled improvements to segment one, all sidewalks, pedestrian ramps, driveway entrances and bicycle facilities will comply with the Americans with Disabilities Act.

The interchange project was supposed to solve problems related to “a high concentration of rear-end and sideswipe crashes on the mainline and collector distributor lane merge areas, as well as rear-end collisions at US 1 and Edgewood Road in both directions,” but the city received a letter Sept. 19 saying the project was canceled.

“Both of these are really important to the city, the city has been waiting a long time for the Route 1 Corridor improvements,” District 1 Councilwoman Christine Nagle said after the meeting. “[The interchange] is [a] very confusing, very crazy access point … it’s kind of a very busy intersection and, honestly, I know in other parts of the state, people would be yelling a lot more than we are.”