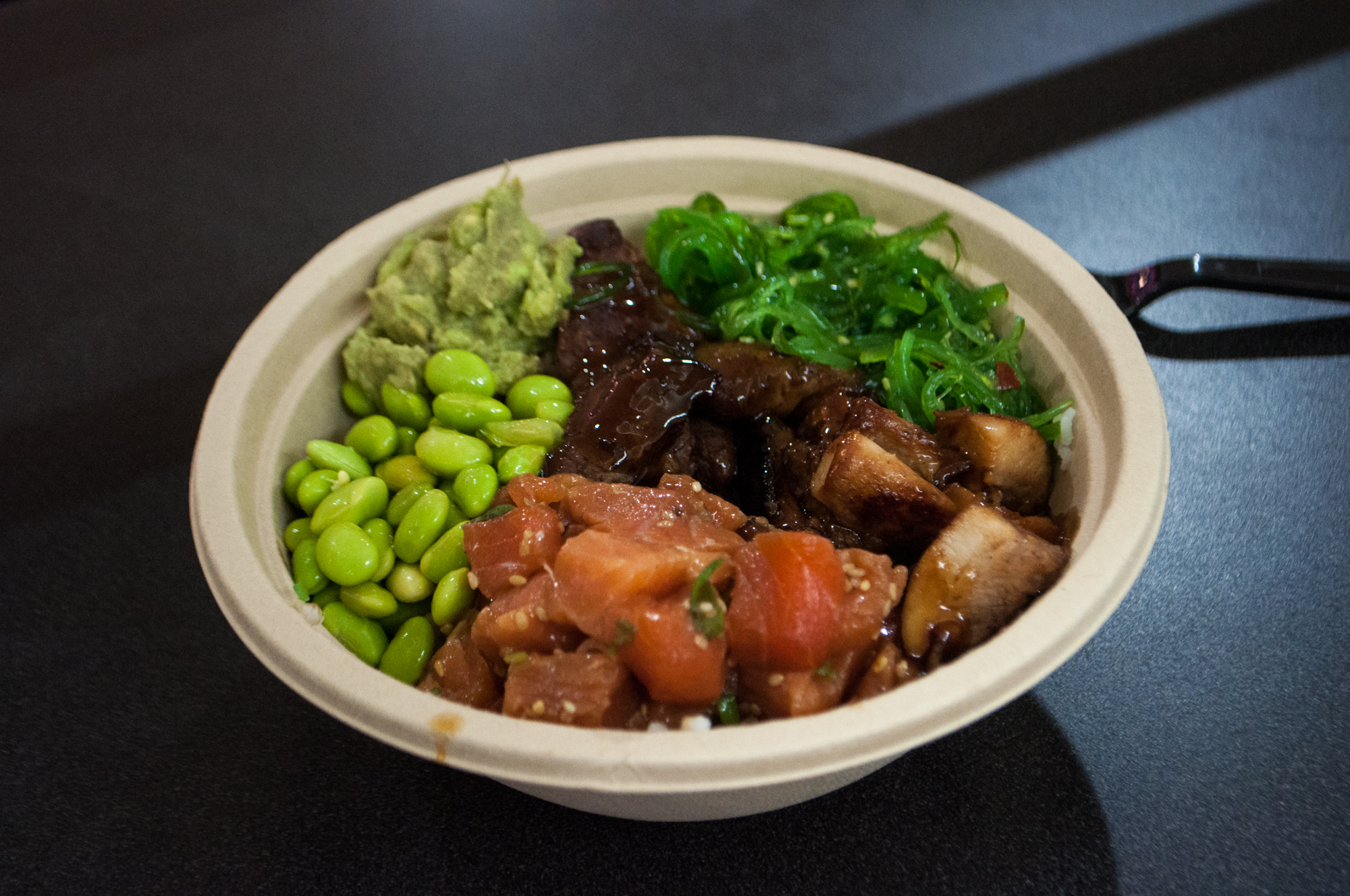 On Oct. 9, Stamp Student Union’s food court welcomed its newest addition: Hibachi-San, a fast-casual Japanese-style restaurant whose cuisine has since garnered the attention and business of students and staff.

Klynt Rayela, Hibachi-San’s general manager and the assistant manager of the Panda Express, another fast-casual Asian establishment, said he thinks the restaurant’s first two weeks of operation have been a success.

“So far, it’s so great,” Rayela said. “We’re spreading the word to the entire University of Maryland community, and we’re happy that Hibachi-San poke is here.”

The establishment prides itself most on its “poke bowls” — a Japanese-Hawaiian fusion dish that includes rice, mixed vegetables, and different types of protein such as chicken, steak and a variety of raw fish. “Poke” means to chop or cut in Hawaiian.

[Read more: Stamp Student Union is getting a new hibachi restaurant — and it serves poke]

In its first week of operation, Hibachi-San made about $32,000 in sales, Rayela said, adding that the figure was comparable to the average weekly sales of Panda Express, which he said were about $37,000.

Rayela said he thinks Panda Express and Chick-fil-A, a fast-food chicken restaurant, are his biggest competitors in the food court. So to publicize the restaurant’s opening, Hibachi-San staff is using marketing efforts such as printing and distributing flyers, working on a Yelp account and other forms of community outreach, he added.

“As soon as my marketing spreads to the entire community, I will be number one,” he added, expressing confidence that Hibachi-San’s cusine would become highly popular among students and staff.

Hibachi-San offers small poke bowls, which come with two types of protein, for $8, and large bowls with three proteins for $9.50. Customers can choose between brown rice, sushi rice and kale salad for the base of their bowl, and have options such as edamame, fried onion, avocado and seaweed salad for toppings.

Like some other food court options, such as Moby Dick and Saladworks, Hibachi-San accepts Terrapin Express, but not Dining Dollars.

While he has been receiving mostly positive feedback from customers, Rayela said he is consistently looking for suggestions and ways to improve the cuisine. For example, he said, after customers requested more varieties of sauces be available as toppings, Rayela went to work on developing some.

Some students, such as senior computer science major Marco Roxas, have already bought food from Hibachi-San several times and made it part of their campus routine.

Roxas said he was drawn to the restaurant specifically by its unique cuisine and hasn’t been disappointed. He doesn’t have a favorite order from the restaurant, he said, but he enjoys trying different protein combinations on his poke bowls.

“I’ve read about [poke], and I’ve always wanted to try it,” he said. “It’s really good sustenance to get me through my day.”

Other Hibachi-San customers were interested to try the new restaurant but were more reserved about their hopes for the quality of the food, such as Juliette Abbonizio, a junior aerospace engineering major.

“I mean, I have medium expectations for it,” Abbonizio said of her first experience with Hibachi-San. “It’s healthier fast food to me.”

Rayela said he thinks the unique nature of poke bowls brings something “special and classy” to the food court and urged students to try it.