This house is 100 percent solar powered. A UMD team wants to mass produce it. 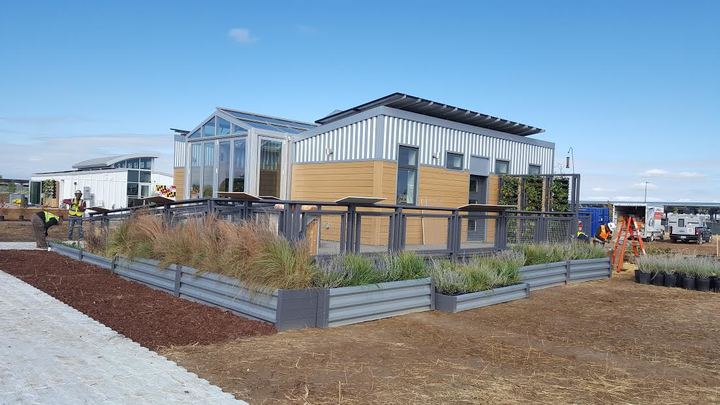 A University of Maryland team is making plans to mass produce its sustainable house design after it placed first nationally and second globally at a competition.

The team won the national Solar Decathlon competition with its six-room solar energy house, which included a composting system, hydroponic garden, movable “living walls” covered in plants, a composting toilet, a solar-powered washer and dryer, among other advanced technology features.

The Solar Decathlon competition, sponsored by the U.S. Energy Department and held in Denver from Oct. 5 to Oct. 15., consisted of more than a dozen teams from colleges around the world competing to design solar-powered houses.

The team plans to mass produce the prize-winning house, which cost about $300,000 for the team to design and build over an 18-month period. When produced for the house market, it’s expected to cost about $200,000 a house.

The team calls its creation reACT, which stands for Resilient Adaptive Climate Technology.

The house is essentially a “kit of parts” design with rooms that can be assembled or disassembled to allow the layout of the house to change based on the owner’s needs. The 993-square-foot space was designed with influences from the Nanticoke Indian Tribe as well as other Maryland tribal traditions.

“This is really a revolution in sustainability,” said Michael Binder, a lecturer in the architecture school and one of the co-principal investigators of the project. “We wanted to create a house which generates its own energy, cleans its own water, recycles its waste — we believe if all houses were built like this, we would not have a shortage of energy or water on the planet.”

Currently the team — which has a core group of about 40 people but includes about 400 total from different colleges within this university — is looking for development partners.

Sophie Habib, the lead architecture health and safety officer for the team, said the next step includes researching and testing to better design the house and test the technology on a bigger model.

They have tentatively identified a Native American community as the first market for selling and building more house models.

The house sparked interest during the competition within some Native American communities interested in living off the grid or on a microgrid, Habib said.

“Instead of just being a one-off design for this competition, we are going to make hundreds of these houses and it really will have an impact on the housing market,” Binder said. “It’s not just a house, but also a whole set of technologies that can be incorporated into any house design.”

The house used for the competition is being shipped back to Maryland, where it will live next to the university’s house from the 2007 Solar Decathlon in an on-campus sustainability park used for research, education and to showcase the projects to regional industry and professional stakeholders, according to the Solar Decathlon’s website.

Graduate student Alla Elmahadi, a construction manager for the project, traveled to Denver for three weeks with about 30 other students for the competition.

“It was just a great experience overall to see all the different schools have their own approach to solar sustainable design,” Elmahadi said. “We all had the same set of rules, but we each came up with very different concepts. We made a beautiful home and I am excited for it to come back to Maryland so people can see it.”

Habib hopes the house will be ready for mass production within the next couple of years.

“We have students currently working on transforming this home for the mass production stage,” Habib said. “Even though we won the Solar Decathlon, this isn’t over and we are exited for what’s to come.”