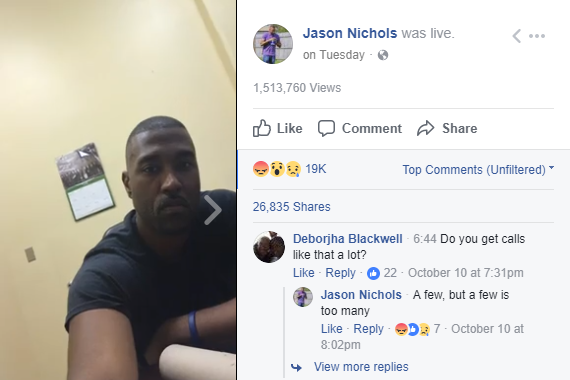 University of Maryland lecturer Jason Nichols shared a Facebook Live video of profane racist voicemails he received after he made an appearance on Fox News.

“This message is for Jason [Nichols],” the woman said in one of her two four-minute messages. “I’ve been listening to him on Fox. You know, this fucking n—–, you n—–s are not going to be satisfied until you change every fucking piece of shit holiday to N—– Day.”

Nichols, a lecturer in the African American studies department, appeared on Tucker Carlson Tonight on Monday to discuss Columbus Day with the host.

He argued Christopher Columbus does not stand for American values, citing his enslavement and exploitation of the native peoples.

Nichols received the voicemails from an unidentified caller at about 11:45 a.m. Tuesday.

The video post, which he shared Tuesday, has received more than 1.5 million views. Nichols plays the voicemails in full as he silently glances between the camera and the wall.

“You people cannot live in a civilized society because you’re fucking primates and you’re uncivilized,” the caller continued. “You know, you people are disgusting. You don’t belong here.”

The post has also been shared more than 26,000 times on Facebook. Nichols, whose profile is public, has received an outpouring of support on his posts.

“I’m not even going to lie and say that it didn’t affect me,” Nichols told The Diamondback. “When you’ve been called a n—–, you know, 150 times in one day [and] it feels like at every turn you’re being called a n—– for 24 hours, and an idiot, and a moron, and now a primate and an ape — I don’t care how strong you are, it’s going to affect you.”

The lecturer has appeared on Carlson’s show before to discuss other topics, including the removal of Confederate statues.

Nichols said he typically receives some “abusive emails” after his appearances. Generally, he asks the front office to delete any voicemails he receives but decided to take a listen after they were forwarded to his line this time, he added.

He decided to share this voicemail because of the positions the woman said she has held, which included working as a probation officer.

“I wanted to let people know that these people are bankers and law enforcement and parole officers and in many positions of power that can affect people’s lives and in some cases destroy them,” Nichols said.

“If you have seen the despicable verbal attack on #UMD Professor Nichols, please join our community in showing support for him,” Loh wrote.

Nichols said he will continue to go on Fox if invited, adding that he and Carlson have a cordial relationship.

“If you go on MSNBC, you’re kind of preaching to the choir,” Nichols said. “We need to go in and disrupt some of those narratives on networks like Fox.”