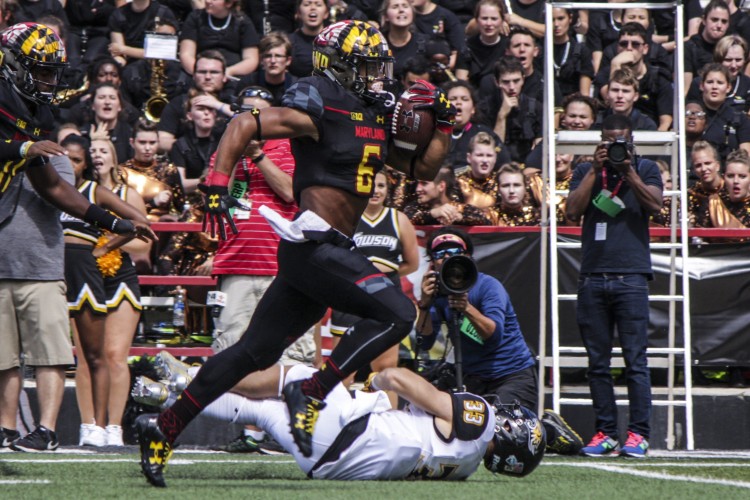 After taking a handoff from the shotgun with under two minutes remaining, Maryland football running back Ty Johnson avoided contact on his game-winning 34-yard sprint through the heart of Minnesota’s nation-best run defense.

His burst gave Maryland a seven-point lead with 1:10 remaining and highlighted a 262-yard team rushing performance in a 31-24 win. Johnson finished with 130 yards, and running back Lorenzo Harrison tallied 75 in the Terps’ Big Ten opener.

Maryland’s offensive display marked a dramatic turnaround from its Sept. 23 loss to Central Florida, when it totaled 42 yards on the ground. Finding success against Minnesota, which had held opponents to 59 rushing yards per contest, made the effort more impressive.

“They stepped up to the challenge,” coach DJ Durkin said. “We made the plays. So I’m very proud of this group to be able to get this win on the road.”

Durkin fired up his offensive lineman by telling the players Minnesota entered with the country’s first-ranked run defense. And after Central Florida held Johnson to 25 yards, he shared a motivation to dominate on the ground.

Johnson and Harrison found space on the edges against the Golden Gophers, setting the tone with 55 combined yards on their first two possessions.

“I was anxious to go against them because of how well they swarmed to the ball,” Johnson said. “We knew when we hit a hole, we needed to [take advantage].”

Third-string quarterback Max Bortenschlager provided the Terps’ first score, converting a fourth-and-10 with a long completion to wide receiver DJ Turner and finding the end zone with a seven-yard run up the middle.

Though Bortenschlager, playing in place of injured signal-callers Tyrrell Pigrome and Kasim Hill, is not known for his running ability, he kept the Golden Gophers off-balanced with a couple of read option carries.

“I’m not the most athletic guy,” Bortenschlager said, “but being deceptive is pretty key.”

Bortenschlager completed several key passes amid an improved performance. He connected on 18 of 28 throws for 154 yards and two touchdowns, while avoiding the turnovers that harmed him against Central Florida.

The sophomore threw two interceptions and took five sacks in Maryland’s loss to the Knights. But by getting rid of the ball quicker and making better reads in the pocket against Minnesota, he committed few mistakes.

“He took the opportunity that was given to him,” Johnson said. “If you look throughout the game, he did his job.”

In the second quarter, Bortenschlager gave Maryland a 14-7 advantage with a pinpoint toss to wide receiver DJ Moore in the corner of the end zone. A fake handoff drew the Golden Gophers toward the line of scrimmage before the 27-yard throw, displaying how the threat of the rushing attack helped the passing game.

After Minnesota tied the game at 17 in the second half, Johnson sprinted for first downs on consecutive plays to move Maryland (3-1, 1-0 Big Ten) to the 21-yard line. Durkin said the junior’s powerful short yardage running helped him find success even when Minnesota (3-1, 0-1) swarmed the line of scrimmage.

Bortenschlager finished the drive with a four-yard throw to running back Jake Funk.

Johnson reached 100 rushing yards for the third time this season with his go-ahead run late in the fourth quarter. Cornerback JC Jackson sealed the win with Maryland’s second interception of the game.

As Bortenschlager kneeled to run out the clock, Durkin smiled on the sideline. After watching his players fall apart in the second half of their loss to Central Florida, he cherished the sustained effort against Minnesota.

“Those guys had something about them today,” Durkin said. “It’s got to continue.”