“They are us”: members of UMD community pray for DACA students at vigil 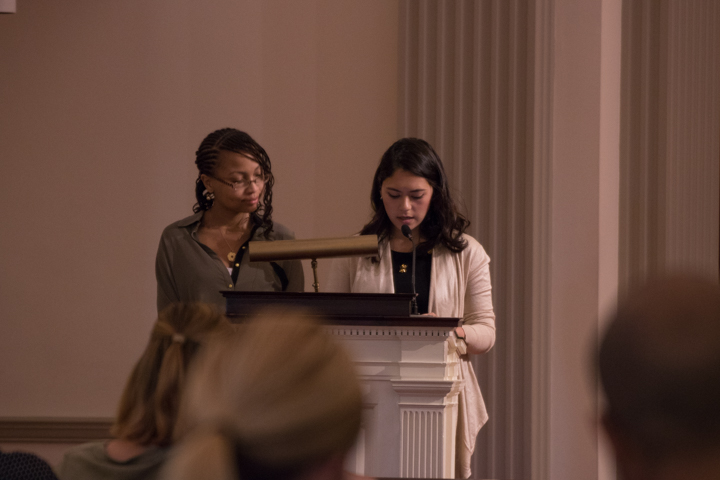 Two Umd students at the Maryland Memorial Chapel on September 28th 2017. The students were leading a prayer during the Interfaith DACA Vigil. (Richard Moglen/The Diamondback)

With heads bowed and eyes closed, about 25 students and staff from various faith communities at the University of Maryland sat in the Memorial Chapel as campus religious leaders guided prayers and reflections for those covered under DACA.

Nick Schmitz, the chair of the Catholic Student Center’s Interfaith Committee, said he wanted the different faith communities on the campus to advocate for those protected under Deferred Action for Childhood Arrivals, a program for undocumented immigrants who came to the U.S. as children and meet certain guidelines to study and work in two-year blocks.

“Interfaith work is a great way to show respect across differences,” Schmitz said. “Especially now when the world is very divisive.”

President Trump announced the end of the DACA program Sept. 5 and called on Congress to work on a legislative solution.

Nearly 800,000 Americans have been covered under the program, and as of fall 2016, there were 113 DACA students at this university.

Schmitz helped put on the event with leaders from the Catholic Student Center, the United Campus Ministry, Maryland Hillel and the Baha’i Club.

“This world is crazy and unfair,” Joseph said. “I don’t really know what I can do other than pray.”

During one prayer, those in attendance said after each statement, “God hear our prayer,” their solemn voices echoing throughout the chapel.

Afterward, Laura Peralta-Schulte, an advocate for Catholic lobby group NETWORK, spoke to students about how they could become involved.

Peralta-Schulte urged the students to support the Dream Act of 2017, a bipartisan bill in Congress that would provide a pathway to citizenship for those with DACA.

“The Dream Act was initially introduced 16 years ago,” Peralta-Schulte said. “It is time for the Dream Act to become law.”

When Peralta-Schulte asked the students in attendance if they knew someone with DACA, about half raised their hands.

Students were also given pre-written letters to sign that urged their respective senators and representatives to support the Dream Act of 2017.

Chukwuma Odigwe, a senior electrical engineering major, said he came to the event in light of the end of DACA.

“I know some people who’ve been affected by this,” Odigwe said. “But even if I didn’t, it’s really sad to come this far and have this opportunity taken away.”

Odigwe, a Catholic, added that interfaith events can be an important way to get to know people from other religions.

“A lot of times it’s really easy to focus on differences that faiths have,” Odigwe said. “It just really allows us to see what we have in common. … It’s good to see other faith groups come here and pray for one thing.”

Freshman physics major Raphael Rose said he came because he wants to become involved in as many efforts for DACA as he can, adding that he organized an interfaith event at his high school after one of Trump’s travel ban orders.

“We all have a shared obligation to justice and doing good,” Rose said. “That’s something that every faith believes in.”