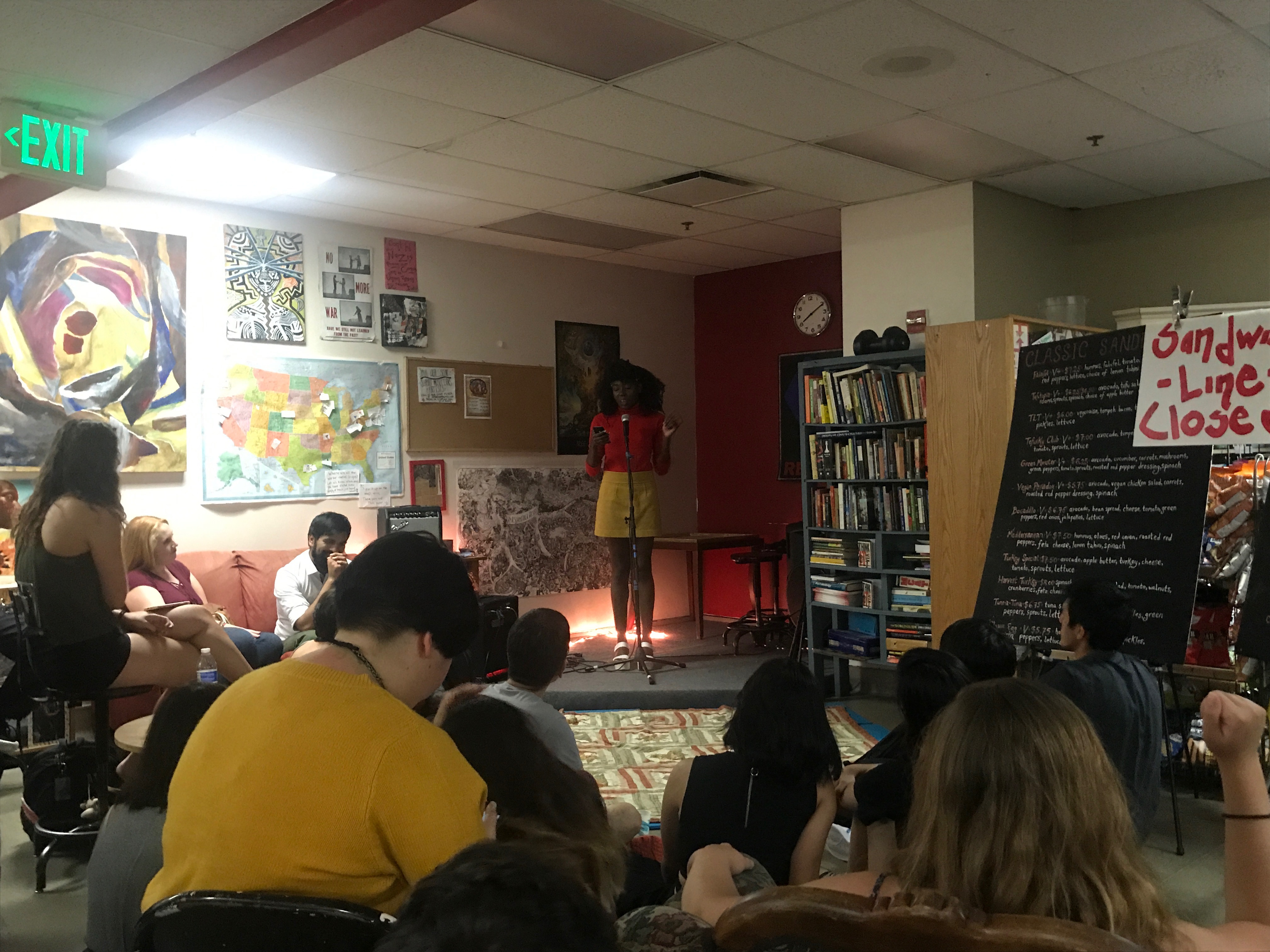 In a school as large and intimidating as the University of Maryland, Terpoets, a campus group for written and spoken word poetry, prides itself on being a diverse collective of students who have their own, unique stories to tell.

“Being in a space with other people that have different walks of life, we’re very open to each other and honest,” said Asiana Phan, Terpoets president and a junior studio art major. “You can present an idea, but not necessarily challenge another person. There’s no need for ugliness or any sort of demeaning language in our space.”

Terpoets had their first open mic night of the semester on Friday in the Maryland Food Collective, where there was a free tofu and vegetable dinner with mint iced tea. Many in the small audience were friends of those performing. Although the audience was intimate, the talent on stage was big enough to impress a whole theater.

“I saw a poster and I heard about [the open mic] at NextNOW Fest last week, and I knew that I liked the Co-op and this whole vibe,” said freshman biology major Karli Lawrence. “I really like spoken word stuff, even though I’m not very good at it, so I thought I’d come out and see it.”

The event opened up with auditions for the university slam team, where Lawrence and other randomly selected audience members had the opportunity to judge.

“That was intimidating because they were all very talented and I’m not very experienced, so I was like ‘What do I judge this based on? They’re all so good,'” Lawrence said.

The auditions led into the open mic portion of the event. Poems covered a wide range of topics, although not every performance was a poem, as predicted by Terpoets treasurer, Tayo Omisore.

“The stuff [at open mic night] is a wild card, people talk about everything from parental issues, their school issues, being in love, falling out of love. People perform music. People do jokes, or [they] talk about feminism or politics,” said Omisore, a senior accounting major. “People always come to me and say, ‘I want to come to the open mic and I don’t know what to do.’ The only thing I want anyone to do when they come to my open mic is just tell the truth. I don’t say that we’re musicians or poets, I say we’re truth tellers.”

Many of the performances were heavy, with topics of sexual assault or police brutality, but there was also a poem about love and a funny prom story that balanced out the evening.

“I might have a piece about black oppression but somebody might have a really touching piece about depression,” Omisore said. “Those are both very sad topics, but even when we talk about the happier things, happiness means very different things to different people. Happiness and lighter emotions all look different through different perspectives. When we see the same emotion being displayed 20 different ways, that’s when we have a good creative community for writing.”

Terpoets, which was created out of the Jiminez Porters Writers’ House, is a space for building literary expertise. Since poetry is often born from emotion, Terpoets focuses on more than just words.

“How we use [creative writing] is to be aware of identity and how we see ourselves in the world and explain the perception of others — how they look at you and vice versa,” Phan said. “How it functions, and what we do, is not only trying to keep going within our organization but allow other sorts of creative outlets as well.”

Omisore, who is also a creative writing minor, plans to pursue writing throughout his future career in accounting.

“My dad is also an accountant and he always says ‘at least at the end of the day you’ll be able to write your ass off,'” Omisore said. “I am an accountant because I am good at what I do and it’s a good paying white collar job, but the creative writing minor is my way to make sure I don’t lose that fire to create, to truth-tell, to impress upon people my commentary on the world and have some impact.”

Terpoets will have its next open mic on Oct. 6 and invites everyone to participate.

“Sometimes, especially now, we get caught in echo chambers with people who are all liberals or all white or all black and you get a monolith of a poetry repertoire,” Omisore said. “But we have people of all different creeds, all different sexualities, all different socioeconomic backgrounds and that really shines through when people hear our pieces.”