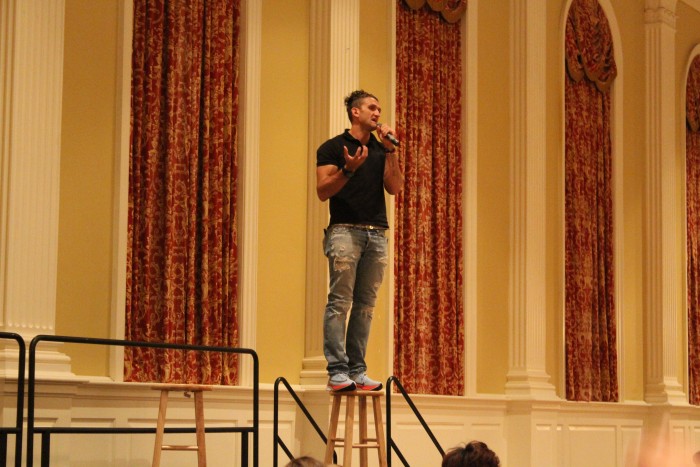 The thing about Casey Neistat is you either know him or you don’t. That’s what the SEE board discovered when it selected the YouTube star to give Thursday’s fall lecture. Neistat wasn’t the group’s first choice, but his cult following easily sold out the hundreds of chairs set up in Stamp Student Union’s Grand Ballroom.

The 36-year-old spent much of his time on stage discussing his rise to fame in the dawning age of vloggers. He worked odd jobs and lived off welfare before a video about a bicycling ticket kick-started his career. After creating an HBO show with his brother, Neistat focused on his highly energetic narrative videos chronicling his life in New York City as well as his global travels.

“I think God was probably mad when I was born and cursed me with way too much energy,” Neistat said. “I keep waiting for it to fade but it doesn’t.”

Neistat puts that energy into his start-up company Beme, which was purchased by CNN last year, as well as his life with his wife and daughter and the videos he makes for the 7.8 million subscribers to his YouTube channel.

Balancing all that can be tricky.

“I think anything you do that’s all-consuming like that is dangerous for a relationship,” he said. “The idea that all day long you’re thinking about, ‘how can I capture and share what I’m experiencing right now’ is a really draining undertaking.”

For junior kinesiology major Nancy Morgan, following the life of Neistat’s family is a family affair. Morgan attended the lecture with her brother, Michael Morgan, a freshman enrolled in letters and sciences.

“Through my brother’s passion for [Neistat’s videos] I got really big into it,” she said. “We would watch his videos together and it was part of our brother-sister relationship.”

Shrieks and a wave of Snapchat-ready cellphones greeted Neistat as he entered the ballroom. Several students came with cameras to capture the lecture for their own vlogs.

Neistat said inspiring his fans is a “beautiful, wonderful byproduct” of his work. He acknowledges his platform requires responsibility and carefully chooses the products and companies he works with. Although he doesn’t consider himself a journalist, he is careful to accurately and authentically document his days.

“People today — especially my YouTube audience — their bullshit sensors are more refined than anyone in history because we all consume more media than at any point in time in history,” he said.

Although his videos have carried him far, Neistat says there’s a downside to more than a decade of internet fame. He stopped showing his daughter’s face online after a fan recognized her and approached her.

“A big part of the reason why we moved is because people figured out where we lived and they’d start showing up at my house,” he said.

Student Entertainment Events public relations director Laura Cross discovered just how eager students were to meet Neistat after she received multiple emails inquiring about a meet-and-greet. SEE did not plan or announce an opportunity to meet him.

“There is something unique about internet fame,” Neistat said. “It comes along with a sense of entitlement on the part of your audience.”

He added that although one of his videos can do more views than a premiere of Keeping Up with the Kardashians, Kim Kardashian is seen “as untouchable, while YouTube stars who have a similar amount of exposure are seen as entirely accessible.”

The hour-long event ended with a brief Q&A before Neistat announced he was running late to catch his New York-bound train from New Carrollton. As he left the stage, one of his fans ran after him, saying she planned to meet him there.

If she did catch up with him, Neistat might have understood.