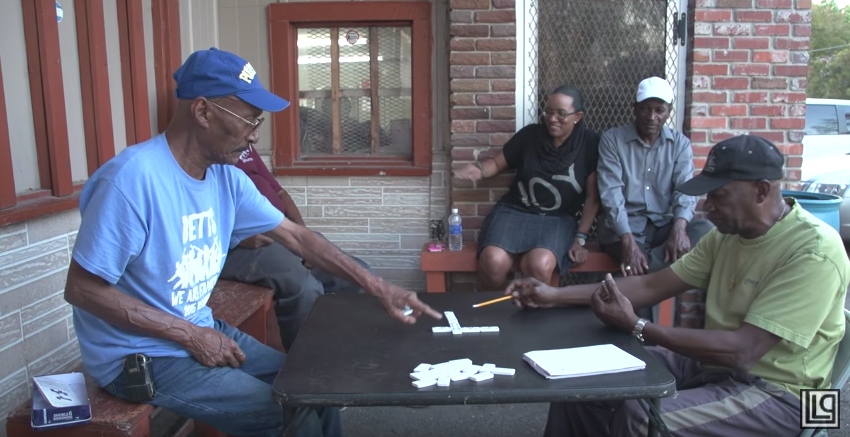 For University of Maryland senior Destini Monk, Tuesday’s screening of Talking Black in America went beyond watching a documentary. The event, hosted by the Language Science Center in Hoff Theater, featured a Q&A with executive producer Walt Wolfram, and was especially salient for the hearing and speech sciences major.

Modern experiences were backed by historical context, such as the cultural and physical isolation of black communities during segregation and slaves struggling to communicate with each other after being separated from those who spoke their native tongue.

The documentary told the story of black preachers, rappers, academics and everyday folks and their experience with language. Many concluded that “talking black” is about more than just words and sentence structure, but rhythm and cadence and speaking with one’s hands and body.

The filmmakers captured communities as well as individual experiences. Shots of street festivals cut to intimate interviews about the connection between culture and language. Classroom scenes focused in on teachers struggling to teach both inclusivity and real-world professionalism. No setting was left without giving viewers a broader understanding of talking black in America.

Many of the people featured in the documentary talked about covering up the way they speak in professional, educational or generally white spaces and how it can feel alienating to have to actively code switch — a sentiment echoed by many in the audience after the screening.

“A lot of African-American students feel that way, like they have to put on a different face for anything — job interviews, talking to a professor after class, speaking in front of others,” Monk said.

The discussion often centered on the importance of erasing the stigma around African-American Vernacular English especially in the classroom to show that dialects are not incorrect or non-standard English; they are simply different.

“We should not teach English as if it’s this monolithic entity and, from the get-go, teach diversity,” Wolfram said after listing off various words for sub sandwiches and soda as examples of the many different dialects of English.

The documentary showed examples of African-American Vernacular English carrying over into mainstream culture — specifically through hip-hop — and noted other cultures are now embracing the way black Americans speak instead of mocking it.

“I feel as long as you aren’t using [African-American Vernacular English] in a derogatory way or to put somebody else down or make fun of the culture in general it’s perfectly fine,” Monk said. “It’s something that’s not only being adopted by white people but other cultures as well, like [the documentary] had Asians rapping on stage — so in that way we’re spreading our culture.”

One of the clearest takeaways from the film was there is nothing better about “standard” English — it is not superior or easier than other dialects of English.

“For a long time, I felt like speaking the way I did was bad and shameful,” Monk said. “However, I feel like now I know that it’s okay and it’s a language in and of itself and not necessarily separate or sub-standard.”

Along with news of a sequel and four-part mini-series in the works, Wolfram left audience members with a challenge — to encourage themselves, peers and this university to value language diversity as much as any other form of diversity.