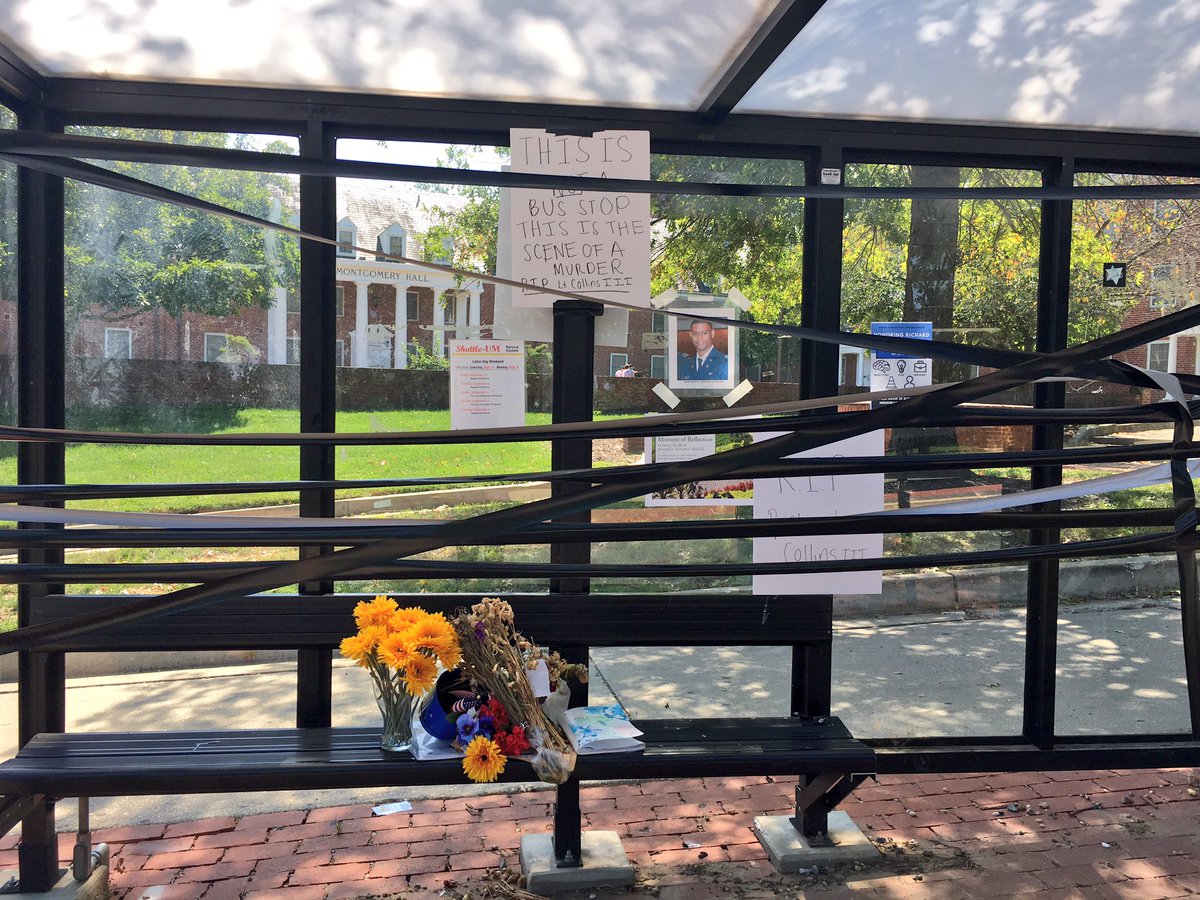 By Noah Fortson and Jessie Campisi

The University of Maryland’s Montgomery Hall bus stop — where 23-year-old Bowie State University student Richard Collins was killed in May — has been moved to near Annapolis Hall.

“We want to memorialize and honor the life and the memory of Lt. Collins,” said university President Wallace Loh, who added that officials waited to move the bus stop because they wanted to get consent from Collins’ family.

“It would be incredibly rude [and] disrespectful for us to do anything without the consent and engagement with the family,” Loh said.

A temporary protective barrier has been placed around the bus stop, and this university is planning to archive items placed there in Collins’ honor, university spokeswoman Katie Lawson write in an email. Items that have been damaged by weather will be removed “out of respect,” she wrote.

“The university has received preliminary consent to begin discussions regarding a memorial to honor Lt. Collins, pending further discussions with his family,” Lawson wrote.

DOTS Executive Director David Allen said there have been no complaints about the bus stop being treated as a temporary memorial.

“This is a good stand-in until they find an appropriate place to put a permanent memorial,” said junior communication major Chris Egbunine. “Sometimes I see people will open up the binder there and read about the man’s life and unfortunate, tragic death.

“It’s sad, but [it’s] a good thing to keep students notified about the dangers that could possibly happen.”

Collins, a newly commissioned second lieutenant in the U.S. Army, was killed near the bus stop in the early hours of May 20. Sean Urbanski, then a student at this university, approached Collins and two of his friends at about 3 a.m. and said to him, “Step left, step left if you know what’s good for you,” University Police Chief David Mitchell said at a news conference. After Collins said no, Urbanski stabbed him in the chest.

Urbanski, who is white, was indicted on one count of murder in connection with Collins’ death. University Police and the FBI are investigating the stabbing as a potential hate crime, though Urbanski has not yet been indicted on any such charges.

The campus held a moment of silence on Aug. 30 to honor Collins’ life. Days after, the Montgomery Hall bus stop canopy was covered in black tape, and signs were plastered on its walls with messages such as “This is not a bus stop. It’s the scene of a murder. RIP Lt. Collins III.”

“Every time I come here,” he added, “I think about it and pray, because it is scary.”