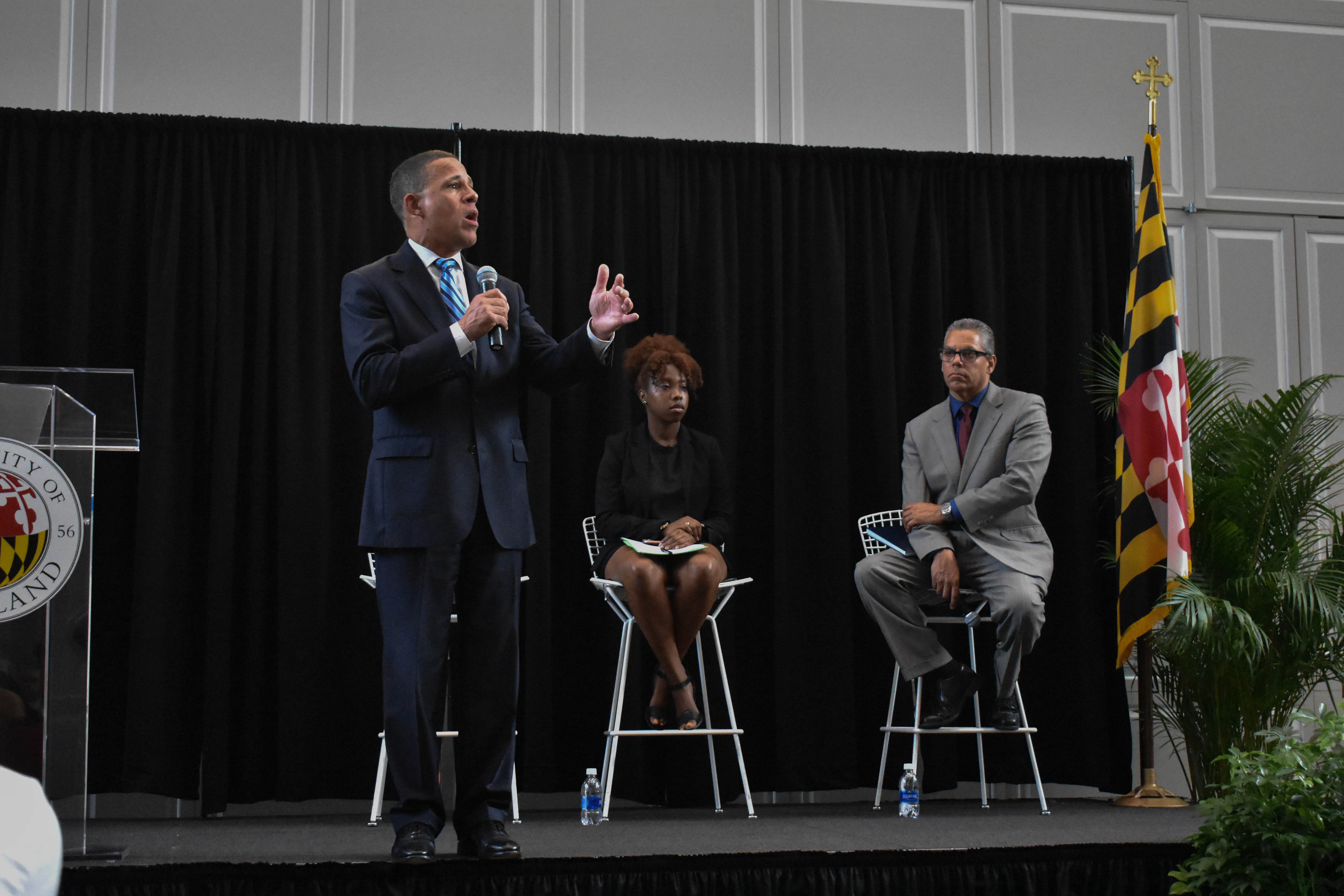 U.S. Rep. Anthony Brown announced during a speech Thursday afternoon that he plans to introduce a bill he hopes will curtail hate speech at universities.

If passed, the bill would require universities and colleges to demonstrate they have programs and initiatives in place that clearly define to students “what is acceptable speech and what is not acceptable speech,” Brown (D-Md.) said to a room of roughly 150 people at the Samuel Riggs IV Alumni Center.

For institutions that might lack the necessary resources to create these programs, the bill would set aside grant money to “take away any excuse,” Brown said.

“If you want to see things change, or at least change in government, you first have to know they’re happening,” he said. “That’s why we have the reporting requirement.”

The event was organized as part of this university’s year of “campus-wide actions, dialogues and healing for the University of Maryland community,” following the fatal stabbing of Bowie State University student Richard Collins in May, according to a university press release.

Chief Diversity Officer Roger Worthington opened the event by mentioning recent violence that has rattled the campus community, including Collins’ death, which university police and the FBI are investigating as a possible hate crime, and the white supremacist demonstration in Charlottesville, Virginia, that led to the death of one counter-protester.

Sean Urbanski, then a student at this university, has been indicted on one count of murder in connection with the stabbing. Collins, 23, was black, and Urbanski — who belonged to a racist Facebook group titled “Alt-Reich: Nation” — is white.

“Nothing can prepare us for the kind of hate we witnessed on our campus, Charlottesville and elsewhere,” Worthington said, adding that Collins’ death was a “senseless act of violence.”

He paused his remarks for a moment of silence to honor Collins, lasting a few seconds.

Brown began his speech by talking briefly about Collins and Heather Heyer, who was killed when a car plowed into a crowd of counter-protesters in Charlottesville.

Brown touched on both of their lives and called each death “a heinous, despicable and unprovoked crime of hate.”

[Read more: UMD Police say there is a person of interest in fraternity house noose incident]

Brown said he thinks there’s a direct link between President Trump’s election and the increase of racism and anger he said exists within some segments of the white community across the country. Brown said Trump used this hate to carry him into the Oval Office.

“I think you’d have to be purposely obtuse not to see [it],” he said.

Brown said people on the “alt-right” considered Trump’s election “a sign of rising white consciousness.” He added that even 60 years after the landmark Supreme Court case Brown v. Board of Education — which deemed segregated public schools unconstitutional — there still isn’t equal education, and questions of identity continue to divide the nation.

Student Government Association diversity and inclusion director Ja’Nya Banks also spoke at the event. After the death of Collins, the senior special education major said joined her peers in frustration and disappointment, but not shock.

And while she has held multiple positions regarding diversity, “my most important role was just being a student,” she said.

The bill won’t be the only answer to combating hate speech, Brown said.