Five years after the DACA program was born, UMD students join DC protest to defend it 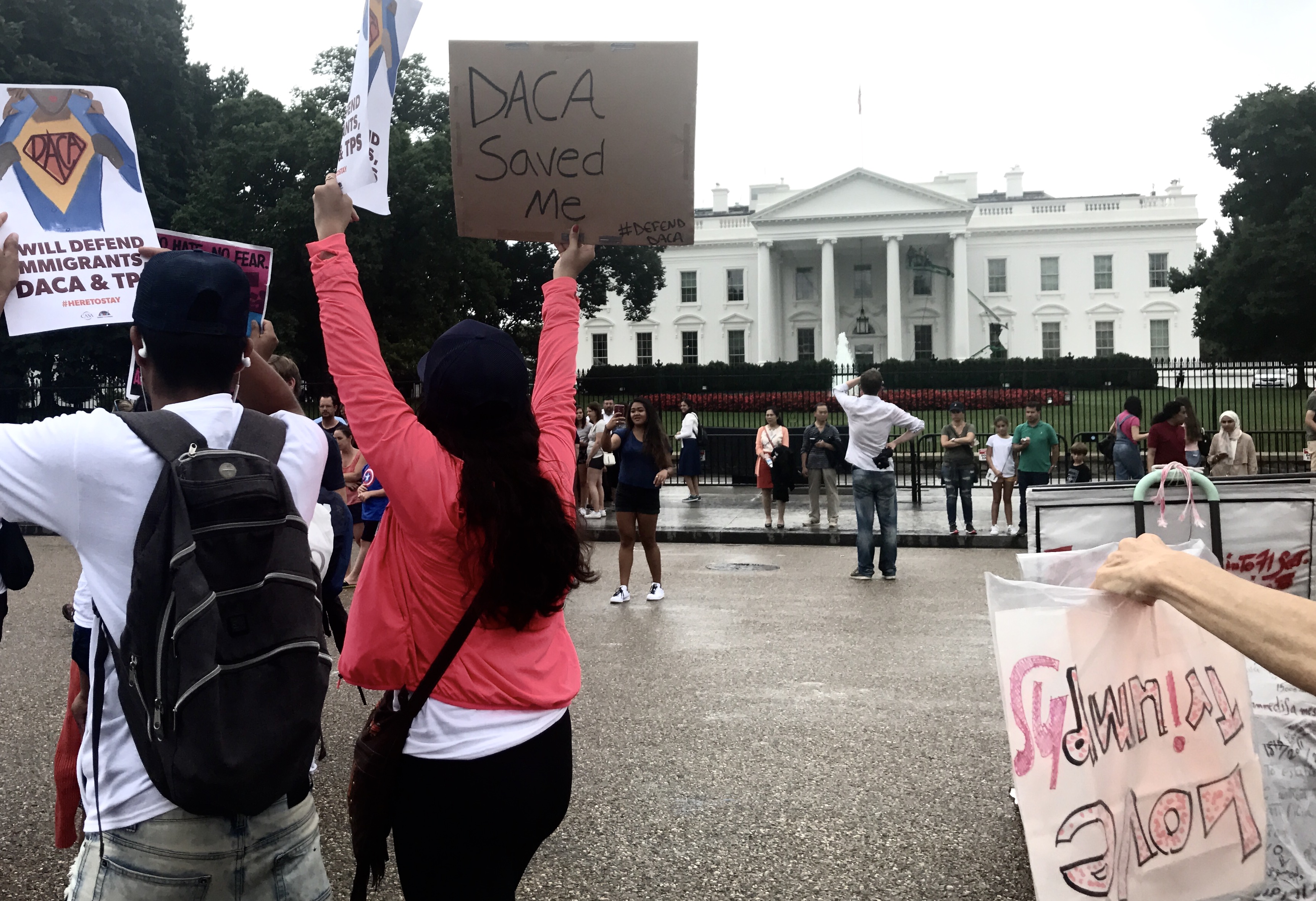 Rallies were held across the country Tuesday to mark the fifth anniversary of the implementation of DACA, a federal program allowing some undocumented immigrants who came to the U.S. as children to stay in the country in two-year blocks.

Jealous, the former NAACP president, was among a group of protesters who sat in an area outside the White House that police closed off after the march. U.S. Rep. Luis Gutiérrez (D-Ill.) and CASA de Maryland Executive Director Gustavo Torres were also in the group.

As police arrested the protesters — 27 total, according to CASA de Maryland — the crowd cheered them on. They chanted, banged on drums and held colorful signs in the air with messages such as “Undocumented. Undefeated.” and “Dreamers are here to stay!”

The demonstrators gathered to fight to keep DACA in place after Republican officials from 10 states urged President Trump in June to begin phasing out the program by Sept. 5, or face a legal battle. DACA has granted nearly 800,000 people temporary legal status since it was created in 2012.

Before the march began, Jealous addressed the crowd, informing them of his intention to sit in front of the White House in protest.

“My father went to jail — white guy in Baltimore went to jail — 60 years ago defending his students against the indignities of segregation, and I’m proud to go to jail today to defend the dignity of young Dreamers from what Trump and Sessions … are trying to do to them,” Jealous said.

Trump pledged to repeal some of former President Barack Obama’s executive orders, including DACA, but in an April interview with the Associated Press, he said Dreamers should “rest easy.” The Department of Homeland Security said in June that it would continue the program, but it was not specified for how long.

U.S. Attorney General Jeff Sessions has been a central opponent of DACA, calling it “very questionable … constitutionally” in January.

Madelyne Ventura, the president of this university’s Political Latinxs United for Movement and Action in Society, noted that both Jealous and Gutiérrez have a history of being “pro-immigrant.”

“Their arrest will gather a lot of attention for us, and so we think it’s really great they are in solidarity with what we believe in,” Ventura said.

PLUMAS organized a shuttle from this university to the rally, carrying members of the group and other students. They came because each of them knows someone who could be affected if DACA and temporary legal status are discontinued, Ventura said. This university had 113 DACA students as of fall 2016, as well as 20 students covered under Maryland’s DREAM Act.

“This is urgent,” said Ventura, a senior mathematics major. “We have peers at our own school that are going to be affected by this. And so we’re here to show that we’re here to protect [undocumented students], as well as our family members and friends who will be affected.”

Multiple campus organizations, including the Graduate Student Government and the Student Government Association, have advocated in favor of this university’s undocumented and Dreamer students. University President Wallace Loh sent an email to the student body in November, asking “that the UMD community call on the leaders of our nation to continue the DACA youth initiative.”

Yanet Amanuel, a university alumna who attended the protest, said PLUMAS plans to work with local representatives to implement its plan to provide more resources for this university’s undocumented students, including advocating for a full-time immigration lawyer on the campus.

There was no lull in the crowd as energetic drummers and event organizers led the group through the muggy streets over pavement soaked with rain from an earlier downpour.

“Rain cannot stop the fight for justice and freedom,” former congresswoman Donna Edwards (D-Md.) told the crowd. “We are not going to let a little rain or a little Trump stop us from making sure everyone has a place in the United States of America.”

Event marshals spread throughout the crowd with megaphones, leading impassioned chants that rippled across the march. “Say it loud, say it clear, immigrants are welcome here,” they shouted. “This is what America looks like. Up, up with liberation, down, down with deportation.”

Gutiérrez, who addressed the crowd before the march, told demonstrators that people would stand up for their community by engaging in civil disobedience.

Officials from Gutiérrez’s office wrote in a tweet at about 4 p.m. that he was still in custody.

As police began to arrest the sole remaining protester in the enclosed area, he shouted, “No justice!” to the crowd behind the metal fences.

Without hesitation, “No peace!” rang out throughout the remaining crowd members, who were still cheering and chanting as the last police van drove out of sight.