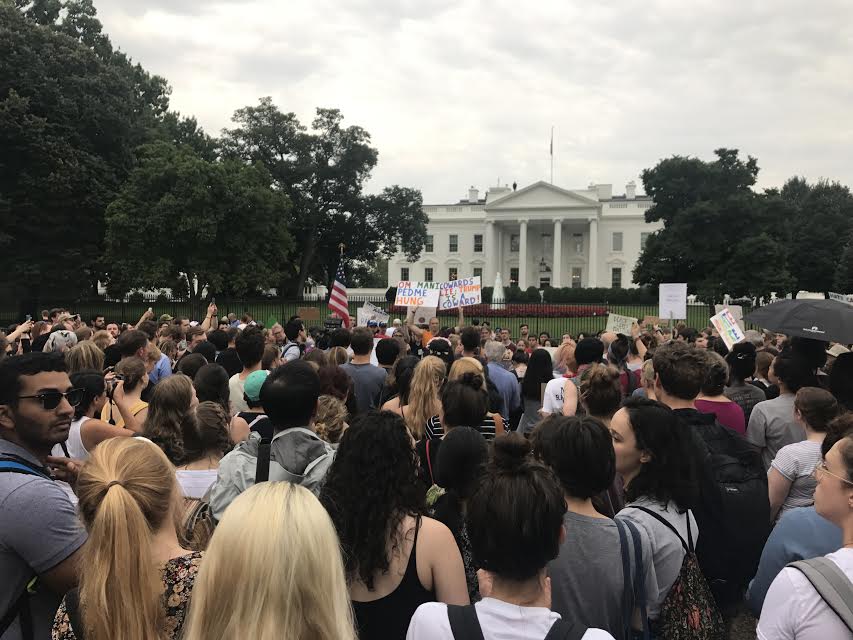 Hundreds of demonstrators, including numerous University of Maryland students, gathered at Lafayette Square in Washington, D.C., on Monday night to condemn white supremacists and remember a counter-protester who was killed at a white nationalist rally in Charlottesville, Virginia, on Saturday.

Following clashes between white supremacists — including neo-Nazis and Ku Klux Klan members — and counter-protesters during a “Unite the Right” march, a car plowed into a crowd of those demonstrating against the white nationalists, killing 32-year-old Heather Heyer and injuring 19 others.

Event organizers and demonstrators at the rally — which was put together by local college students — made speeches outside the White House. Many in attendance held signs, including some that read, “Make racists afraid again,” “Nuck fazis” and “White silence is violence.” The signs condemned white supremacy and President Trump, who received bipartisan criticism for his delay in condemning these hate groups.

James Fields Jr., who police say rammed his silver Dodge Challenger into the crowd, has been charged with second-degree murder. Fields has been linked to white supremacist group Vanguard America, which has denied any ties to him.

There have been five reported instances of white nationalist posters — some of which have included symbolism for Vanguard America, previously known as American Vanguard — found across this university’s campus since December. Police are investigating them all as hate bias incidents.

Yvonne Slosarski, a communication doctoral student at this university, said she went to the rally to help draw more attention to white supremacy in America following the events in Charlottesville.

“There’s really no guarantee that it won’t happen on our [campus], and I think that one of the things that the University of Maryland should consider is whether it values the free speech of absolutely everyone more than the safety of some of its students,” Slosarski said. “It’s going to have to make that decision.”

University President Wallace Loh released a statement following the Charlottesville protests, speaking out against the “supremacist ideology of hate, bigotry and violence” he said occurred.

“The University of Maryland stands in solidarity with the University of Virginia and the City of Charlottesville in ​our ​shared​ commitment to fundamental American values of diversity, inclusion, and mutual respect,” the statement read. “Everyone has the right to assemble, march, and speak freely, but intimidation and assaults have no place anywhere in our democratic society.”

Will Howell, a communication doctoral student, said white supremacy and racism has been growing across the country, but no one talks about it openly until violence — like what occurred in Charlottesville — brings it out into the open.

Howell wanted to help amplify these issues, he said, and he hoped Loh would be willing to have a conversation about them.

“I hope we have an open and direct conversation [to] not only bring a conversation into the open, but to make sure that it’s translating into actual change in policies — how we admit students, how we support students at Maryland, how we deal with things like those posters when they come up or when somebody expresses something in a classroom that is threatening and discriminatory or hateful,” Howell said.

Loh announced in a campuswide statement in May that this university’s administration was pushing for a rapid response team to provide support to victims of hate incidents, along with an allocation of $100,000 to the Office of Diversity and Inclusion to support its education efforts.

He also announced in June that this university will work with the Student Government Association and the University Senate to consider stiffer sanctions in the Code of Student Conduct for hate and bias incidents, and that there will be a “Pledge of Respect and Unity” for returning and incoming students.

Ajay Mahesh, a senior community health major, said he wanted to attend a rally the day after the Charlottesville protests, but his family, who is Indian-American, didn’t want him to come because they were scared.

Mahesh said he was scared as well, but added that he needed to face his fear.

“I see all these people here and it makes me feel stronger,” Mahesh said.

Tino Fragale, a junior individual studies and finance major, said he was concerned the events in Charlottesville could happen anywhere.

“I wasn’t surprised, but I don’t really know how to react at this point,” Fragale said, adding that events like these no longer seemed infrequent.

Junior government and politics and Spanish literature and culture major Camila Guerrero said she felt she had a responsibility to do something about it.

“I’m tired of seeing it happen all the time,” she said.

The group held a moment of silence for Heyer before walking down 15th Street past the White House and toward Trump International Hotel.

With crowd members holding gay pride, Black Lives Matter, American and anti-fascist flags as they led the way, demonstrators broke out into chants of “Hey hey, ho ho, Donald Trump has got to go,” “No Trump, no KKK, no fascist USA” and “The people united will never be divided.”

People lining the streets often joined in the chants as the demonstrators passed by. As the crowd passed by the Trump Hotel, a chant of “Fuck Donald Trump” erupted.

Further along the protesters’ route, a flag reading “Trump” and “Make America Great Again” waved over the edge of an apartment balcony. The demonstrators responded with repeated chants of the word “shame.”

The demonstrators ended their protest at a statue of Albert Pike, a Confederate military officer. One person in the crowd shouted, “If I had a sledgehammer,” as event coordinators climbed atop the base of the statue to address the group with a megaphone.

Patty Pablo, one of the event organizers, called on the crowd to continue fighting white supremacy outside the rally.

“It’s in your own homes, your schools, your government,” Pablo said. “You call that shit out.”