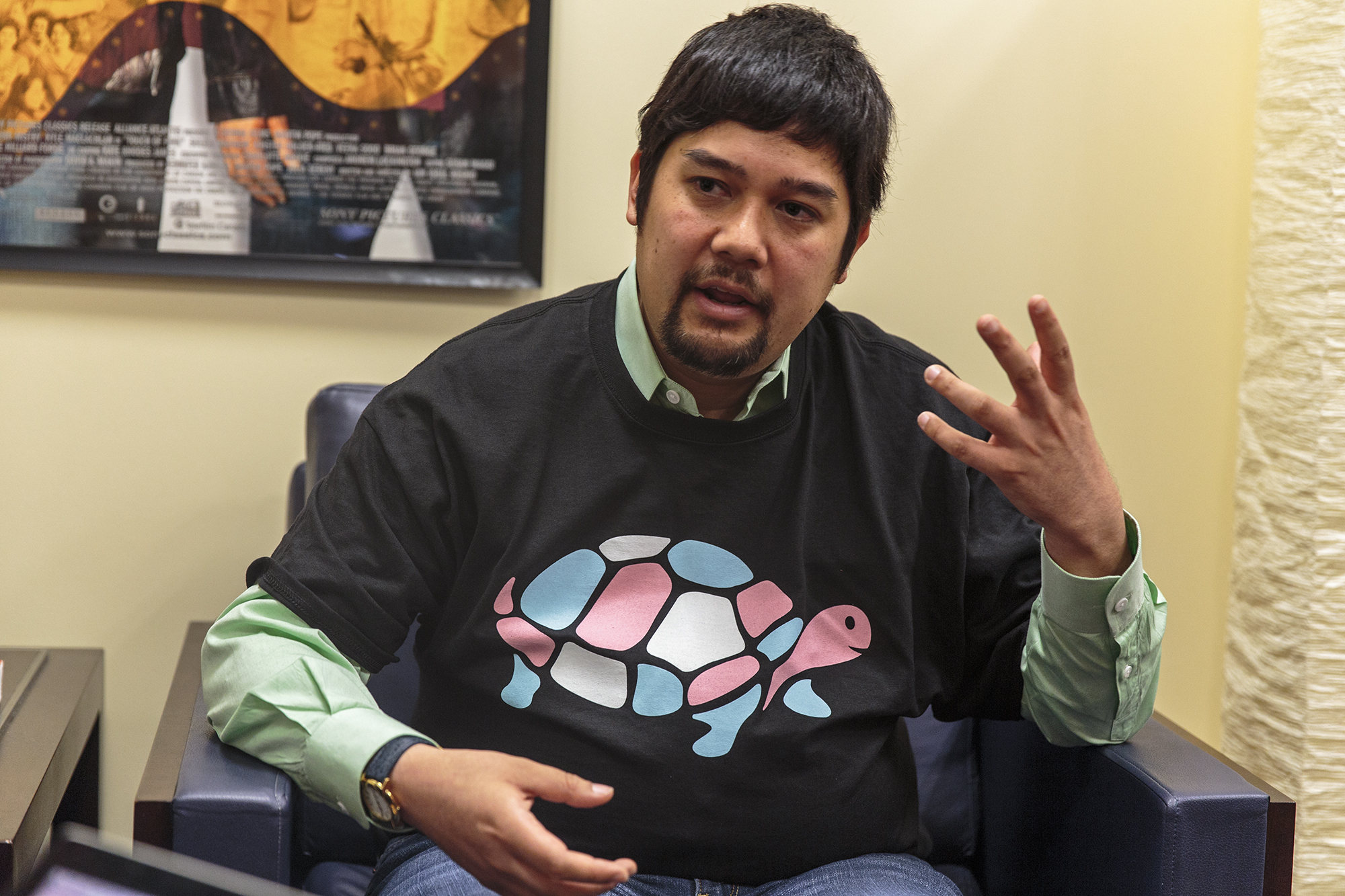 Nic Sakurai received the nations first nongendered drivers license in the District of Columbia. Instead of the standard "M" or "F" designations, district residents may now recieve an "X" on their IDs. (Tom Hausman/The Diamondback)

Too excited to sleep, Nic Sakurai flipped through magazines at 4:45 a.m. while waiting outside the Benning Ridge Department of Motor Vehicles office in Washington, D.C., on Tuesday.

When the DMV’s director arrived just before 8 a.m., she ushered Sakurai into the building for a test run of the DMV’s latest option — an ‘X’ gender-neutral marker on driver’s licenses instead of ‘M’ for male or ‘F’ for female.

Minutes later, Sakurai walked out with a paper copy of their new driver’s license.

The receipt for the license — which is timestamped at 8:04 a.m., 11 minutes before the DMV officially opened — makes Sakurai the first person in the nation with an official gender-neutral driver’s license, they said.

Sakurai, the University of Maryland LGBT Equity Center associate director, identifies as neither a man nor a woman, also known as gender non-binary. The gender-neutral ‘X’ designation allows some people to select an option on their licenses that retains their privacy or better reflects their identities, Sakurai said.

“I finally have an ID that’s true, that’s not a lie any time that I show it or even just think about it,” Sakurai said while sitting in their office. On their black t-shirt was a terrapin in pink, blue and white — the colors of the the transgender flag.

Washington, D.C., became the first jurisdiction to offer the option Tuesday. Oregon plans to roll out a similar option in July.

“I’ve never seen so many people smiling for their DMV photos,” Sakurai said.

Sakurai, who has been working with the DMV for a few months to help create the new option, organized about a dozen people to be among the first to select an ‘X’ on their licenses.

“The staff seemed really excited,” Sakurai said. “We were really excited. One of my friends came in a little bit later and got an ID with an ‘X’ on it and the person who was at the desk doing it was like, ‘Oh, this is my first. I’m excited I get to do my first!'”

Whitman-Walker Health and the National Center for Transgender Equality also worked with the DMV to help craft the new policy.

The change includes gender self-designation, meaning people do not need a health care or social services provider to sign any forms confirming their gender identity before they can change how their gender is listed on their driver’s license, said Arli Christian, the state policy counsel at the NCTE.

“That’s a very important reflection of the fact that we ourselves know our gender identity best and we are the ones best suited to know what’s appropriate and what matches us,” Christian said.

Sakurai said the new license is both symbolic and practical; they can use it to explain to others that they come from a place that “recognizes that there are more than two genders or sexes.”

“To me, the more important aspect … is not about the ID itself, but it’s about the larger legal and cultural shifts that are taking place,” Sakurai explained.

Sakurai has been working professionally on LGBT issues for about 14 years, and was a “highly involved student activist” while completing their undergraduate degree at the University of Illinois at Urbana-Champaign, they said.

Sakurai first arrived in Washington, D.C., in 2003, the same year the first ‘X’ was issued on a passport in Australia. Since then, they’ve worked on national programs to train student activists to create change on their own campuses and have championed projects concerning LGBT issues.

“I’ve actually been in spaces where people go around the room and share their pronouns for the last 17 years of my life,” Sakurai said. “For a lot of people, they’re like, ‘What’s this newfangled thing that you’re wanting us to share your pronouns?'”

However, Sakurai noted non-binary identities have been around for thousands of years.

“So to me, I’m always like, ‘It’s not that new, nothing that we seem to think is new is actually that new,” Sakurai said, chuckling.

Sakurai said they’ve noticed a cultural shift in recent years and that people are more willing to engage in discussions about transgender identities and learn how they can be supportive.

In April, the University Senate approved a proposal that will streamline the process for students who want to change their names and gender markers in university databases. It also recommends the creation of a third pronoun option for non-binary individuals on campus.

“I’m excited to see what we as an institution can and will be doing in the future as well to make sure we’re getting accurate data, that people are included and can select options that are true to who they are,” Sakurai said.

The Equity Center also plans to launch a campaign this fall called the #TransTerps Awareness Project. It will include a month of activities from mid-October to mid-November and the creation of a more robust website this summer to include more information about best practices for inclusion, Sakurai said.

However, Riley Lynn Nairn, a senior Spanish major who identifies as non-binary, said while they’ve seen changes in how transgender people are portrayed in the media, they have not seen a change in their day-to-day life.

“It still feels like there’s the same number of nasty people,” Nairn said. “And it still seems like there’s the same number of accepting people, it’s just as I’ve grown up I’ve surrounded myself with the accepting people because I want a community, I want people to support me, and with that I’m more comfortable being who I am.”

Sakurai noted that while this university is on the “forefront of a lot of LGBTQ+ issues in terms of policy,” it still has work to do concerning cultural change and educational awareness.

For Nairn, the non-binary designation for driver’s licenses is important because it allows people to express themselves authentically.

“It’s something that’s so ubiquitous — everyone has a driver’s license — that it makes sense that we could have a card that shows who we really are,” Nairn said, adding that they hope the Maryland General Assembly proposes similar legislation in its 2018 session.

“We still have a ways to go,” Christian said. “But steps like this are really important to educate people and help them to secure rights and recognition for non-binary people.”

Sakurai said it was a relief to get their new license.

“In my head it’s not real until it’s done,” Sakurai said. “Somehow it could be taken back or somehow it was going to be undone. It was great to actually see the piece of paper, to see the DMV director there that day, to see how happy people were.”

CORRECTION: Due to a reporting error, a previous version of the excerpt on this story incorrectly identified Sakurai as the LGBT Equity Center assistant director. They are the associate director. The story also incorrectly stated Sakurai began working with the DMV late last year. They started in 2017. This article has been updated.