“A precious part in each of us has died”: UMD community remembers Richard Collins III 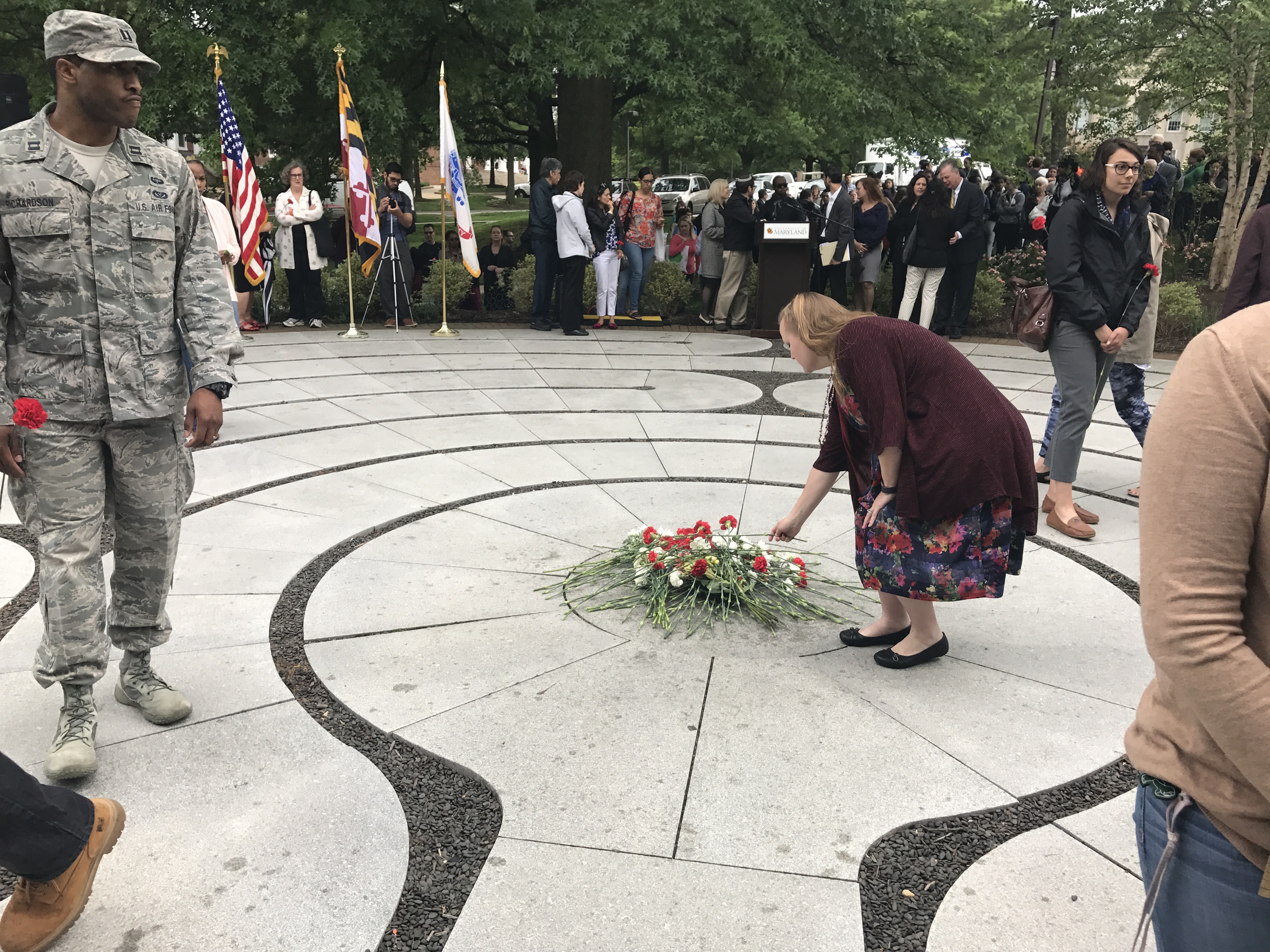 Richard Collins III’s childhood friend described him as a “man full of joy” to University of Maryland students, staff and faculty gathered at the Garden of Reflection and Remembrance to grieve his death Wednesday.

“I never thought I’d know a guy who had so much humor, so much wittiness and so much joy that he wanted to give to people,” said Ian Sloan, an alumnus of this university who was 14 when he met Collins.

Hundreds of visitors packed into the garden, spilling out into the parking lot, to honor the newly commissioned second lieutenant in the U.S. Army.

Collins was pronounced dead at Prince George’s Hospital’s Trauma Center on Saturday after he was stabbed near Montgomery Hall at about 3 a.m. The 23-year-old Bowie State University student would have graduated Tuesday.

Sean Urbanski, a 22-year-old student at this university, has been charged with first- and second-degree murder, as well as first-degree assault, in connection with the incident, which is being investigated as a possible hate crime. Urbanski is white, and Collins was black.

Visitors were handed red and white carnations as they arrived, which they gripped as they encircled the garden’s labyrinth, listening to somber hymns under overcast skies.

Although many are angry about the possibility that the homicide was a hate crime, Sloan urged the crowd to focus on honoring Collins’ life by living theirs “full of joy.”

Tarif Shraim, this university’s Muslim chaplain, led the service. He opened the ceremony by describing Collins as a “gifted,” “wonderful” and “brilliant” young man.

“May he rest in peace,” Shraim said. “Indeed with the death of Lt. Collins, a precious part in each of us has died.”

Shraim called on the crowd to turn toward compassion to heal.

After Shraim concluded, visitors held a moment of silence while “Amazing Grace” was played on a flute. Many students tucked their flowers into a growing pile in the center of the garden before exiting.

By a dribbling fountain at the entrance of the garden, visitors quietly wrote down their feelings in journals scattered on benches.

“Know you are encouraged and supported,” one wrote in a notebook for Collins and his family. “We pray for your continued strength, courage and more for many moons to come.”

Visitors gathered on the steps of the Memorial Chapel before walking down Regents Drive in silence to the bus stop outside Montgomery Hall, where Collins was stabbed.

Those who still had flowers lined up single file to place their carnations among the pictures, signs and candles already present to honor him. Many stood quietly watching, including university President Wallace Loh, Provost Mary Ann Rankin and Police Chief David Mitchell.

Dana Wimbish, a building security services staff member, said she was shocked by the incident.

“They talked a lot about Lt. Collins and his life and how he tried to bring joy to people,” Wimbish said. “I hope that what we learn from this is that if this does turn out to be something that was hate-motivated, that’s not the way that we want to live our lives, that we’d rather live with joy.”

Marquise Wade, a student at Bowie State, traveled to this university to show his support.

“We’re hurting as a Bowie State community, inside the campus and outside the campus, all of our alumni,” Wade said. “It’s greater than just being on campus.”

Wade added that he came to ask Loh questions after reading tweets from this university’s students.

Members of this university’s community took to Twitter under the hashtag #FearTheTurtle to share their experiences with racism, discrimination and hate on the campus.

Many of these tweets expressed frustration with Loh and the administration, saying they did not do enough to address racist incidents on the campus.

A noose was found hanging in the kitchen of this university’s Phi Kappa Tau fraternity chapter house in April, and there have been five reported instances of white nationalist posters found across the campus since December. University Police are investigating all these events as hate bias incidents.

Adam Raeder, a senior history major, said that students at this university need to try to “understand each other a little bit more” and “have a little empathy.”

“This is my home and the fact that something like this has happened — it’s just like mind-blowing,” Raeder said. “I live just down the road and this happened. I have nothing. I can’t do anything about it.”

Brandon Dula, the assistant director of Stamp Student Union’s Multicultural Involvement and Community Advocacy office, said he was interested in learning more about the incident, adding that one of his sons lives in Allegany Hall.

“Words can never replace what has happened here,” Dula said. “A lot was said, but it’s just a fact that a person that young, their life is taken from them, their whole future was ahead of them, all the potential was gone.”

Some in crowd said they were at a loss for what to do after Collins’ death.

The majority of the crowd slowly dispersed, but a few people lingered for a moment longer, scattered close by and leaning on trees or standing on the damp grass, still staring into the vacant bus stop.