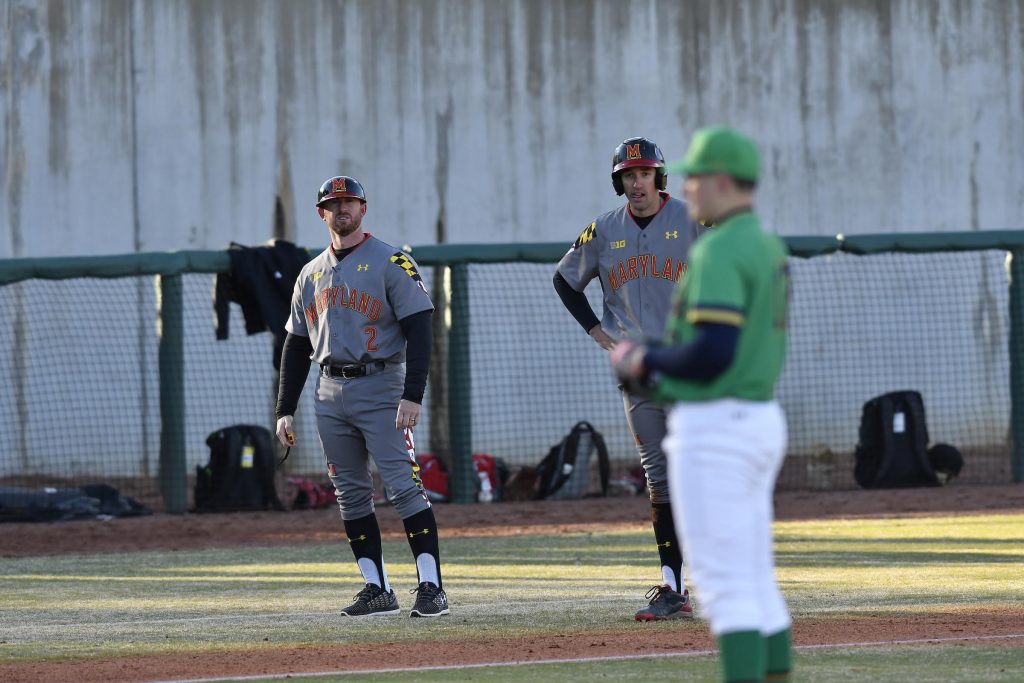 While serving as a student assistant coach at Kansas State, his alma mater, Vaughn called Sawyers, a Wildcats hitting instructor, seeking advice. Pratt Community College asked him to be its hitting coach in 2012.

Vaughn had aspirations to coach Division I baseball, but he thought leaving a Big 12 school might threaten those chances.

Sawyers laughed and instructed Vaughn to accept the job, citing the experience he would gain. He told Vaughn even if he became a head coach the next day, Vaughn wouldn’t have cracked his list of assistant coaching candidates. In the small collegiate baseball landscape, Vaughn lacked experience, contacts and the ability to recruit.

Vaughn was a day away from taking the job at Pratt when Maryland coach John Szefc called. Szefc replaced Sawyers as Kansas State’s hitting coach while Vaughn was an assistant.

Though Vaughn had little experience, Szefc wanted him to be the Terps hitting instructor.

Now in his fifth season with Maryland, Vaughn has relied on “The Pack,” a hitting philosophy Sawyers implemented at Kansas State, to direct the Terps offense. The Terps are hitting .276, helping the program accomplish its fifth consecutive 30-win season.

The production stems from “The Pack’s” three pillars: toughness, approach and intensity.

“Every kid craves an identity,” Vaughn said. “They crave discipline whether they think they do or not.”

Before giving Maryland’s offense an identity, though, Vaughn had to find his own.

TIRED OF BEING AVERAGE

In July 2005, Szefc was seeking a catcher to take the helm at Louisiana-Lafayette. Jonathan Lucroy, now the Texas Rangers’ starting catcher, planned to enter the draft after his junior campaign. Szefc wanted a player to shadow Lucroy for a season before becoming the team’s starting backstop.

He admired Vaughn’s arm and poise under pressure.

Sean McCann noticed much of the same. As he prepared for his second season as the pitching coach at Kansas State, he attended Vaughn’s summer games with the Houston Heat. More than half of the Heat’s pitching staff threw at least 90 mph, and Vaughn’s ability to frame pitches was distinct. McCann wanted to rebuild the Wildcats pitching staff, knowing it would take a strong defensive catcher to do so.

On July 1, 2005, the first day coaches were allowed to call rising high school seniors under NCAA rules, McCann planned about 200 calls. His first, at 7 a.m., was to Vaughn. Vaughn wasn’t overjoyed, as Texas A&M was also pursuing him. So was Szefc.

But Vaughn was convinced after touring Kansas State. With major-league aspirations, Vaughn joined the Wildcats.

In his first three collegiate seasons, Vaughn struggled to differentiate himself. He was encouraged to take as many pitches as possible and hit ground balls to the right side of the infield. Then, Sawyers introduced his version of “The Pack.”

Sawyers changed Vaughn’s swing, giving him a leg kick and encouraging him to drive the ball, pulling it to left field. Nothing changed until Vaughn and his teammates were hitting at Kansas State’s indoor practice facility during a fall practice. Sawyers started screaming.

“I remember telling him, ‘Are you tired of being average?'” Sawyers said. “‘You’ve been average your whole career and you’re being average now. You can be good. I need you to start being good right now.'”

Vaughn responded by batting around .300 and hitting five home runs during his senior year. He notably hit a home run against Wichita State, the Wildcats’ in-state rival. He jogged around the bases smirking, displaying his renewed confidence.

Then, Vaughn helped the Wildcats become the first team to sweep Nebraska in the history of Haymarket Park. During one of the games, a wild pitch sent Vaughn to the screen. With A.J. Morris covering the plate, the runner collided with the Wildcats starter. The two fought. Vaughn got between them and was ejected.

That season, Kansas State qualified for the NCAA tournament for the first time in program history.

“Not softspoken, but well mannered,” Sawyers said. “Underneath that, there’s a real fiery, competitive side.”

Vaughn’s senior season intrigued the White Sox, who drafted him in the 30th round of the 2009 MLB Draft. But Chicago’s Class-A rookie affiliate played a higher-rated catching prospect ahead of Vaughn. Vaughn’s batting average didn’t pass .250. He knew he wasn’t going to be a major league player.

Vaughn played 19 games in 2010 before Chris Cron, who managed that rookie team, called him into his office. Cron said if Vaughn received an opportunity to coach somewhere where they would pay for him to pursue another degree, Vaughn should take advantage.

“He reacted like a pro,” Cron said. “The bottom line was I think you have a future in this game because you have a passion for it, and that passion is not something that’s taught.”

Shortly after, Sawyers received a call from Vaughn. The Wildcats had a graduate manager position vacancy. He wouldn’t be able to help with recruiting and couldn’t leave campus to recruit.

McCann was surprised he took the job. He anticipated Vaughn would pursue a career in engineering after graduating. Vaughn also faced a learning curve; the first time someone called him coach, he didn’t respond.

Vaughn hosted camps, wrote letters to recruits and conducted campus tours. He was one of the first coaches players interacted with during visits. When the tours ended, parents raved about Vaughn to McCann, saying he would make a great coach.

“I’m like, ‘What, are you talking about Rob Vaughn?'” McCann said. “The dude’s like 23 years old. All the parents wouldn’t stop talking about our volunteer coach, and I’m sitting here going, wait a minute .… You trust him, leave him alone and you know it’s going to get done.”

Vaughn’s dedication to the Wildcats helped Szefc when he was hired three weeks before the 2011 season. He gave Szefc a list of each player’s strengths and weaknesses.

Vaughn maintained that work ethic for the next two years, serving as Szefc’s assistant. So when Maryland offered the job to Szefc, he wanted to take Vaughn with him. Vaughn didn’t hesitate when he received the offer. He packed his truck and made the 23-hour trek from Kansas the next day.

Matt Deggs spent the summer of 2006 figuring out what went wrong. Texas A&M went 25-30-1 in his first season coaching the Aggies.

One night, Deggs stopped channel surfing when he came across a documentary about wolves. The theme was that in a pack of wolves, there is no true lone wolf. A wolf cannot defeat a buffalo by itself.

That’s when “The Pack” was born.

Deggs passed the philosophy to Sawyers, who implemented it at Kansas State. Vaughn was intrigued.

Szefc gave Vaughn full autonomy with Maryland hitters, so during his first fall in College Park, the Terps endured a competition Vaughn deemed “pack training,” which doesn’t include a ball or bat.

Former outfielder Anthony Papio, who now serves as a student assistant coach under Szefc, first believed in the concept’s value when Vaughn split the Terps into teams and had them carry logs across Campus Drive. Second baseman Nick Dunn was amused during a fall game of fungo golf.

Whether the activity is push-ups, extra running or an ab workout, the losing teams face consequences. Vaughn wants his offense to fear losing. He wants the lineup to adjust and perform in any situation.

Vaughn doesn’t try to perfect any player’s swing until the spring. Instead, he focuses on collectiveness. In the fall, the team builds an identity. In the spring, that identity is revealed.

“Having a great mental approach and buying into what identity we’re going to be as a group,” Papio said, “that makes you more successful than having a team full of pretty swings.”

Vaughn lifted his hands in the air and sprinted toward home plate to celebrate. Penn State right-hander Sal Biasi held the Terps off the board through eight innings and carried a 1-0 advantage into the ninth on April 14.

Nobody in the dugout was scared. Quickly, that was evident.

Center fielder Zach Jancarski hit a solo home run against Biasi to tie the game, and first baseman Brandon Gum sent Biasi’s next pitch over the left field wall at Bob “Turtle” Smith Stadium, powering the Terps to a 2-1 win.

It was a familiar pattern for Vaughn’s lineup. It rallied to beat William & Mary on March 7. It did the same against Richmond on April 4. Nothing changed in its win against West Virginia on April 11.

Vaughn didn’t realize how talented the offense was until the spring. Gum was injured in the fall, and designated hitter Will Watson was acclimating after transferring from LSU-Eunice. Vaughn and Szefc liked the core featuring Dunn, outfielder Marty Costes and shortstop Kevin Smith. After all, Vaughn has specific requirements for recruits he feels can perform within the confines of “The Pack.”

But Maryland’s offense struggled. The team dropped five of its first six games.

“The stuff we talk about toughness, we’re about to see,” Vaughn recalls thinking. “If we’re in March and we’re trying to see if we’re tough, it’s too late, we’re not.”

Maryland then won eight consecutive games and 19 of its next 23. The Terps have been aggressive on the basepaths, too. Twelve players have stolen at least one base.

“He’s tried to instill that identity in them,” Szefc said. “The test of any coach is, ‘Will his players play hard and show up in battle?’ Clearly our guys do that for him.”

‘HE’S AS GOOD AS THEY COME’

Vaughn stood behind the batting cage at Ripken Stadium while Chance The Rapper’s “No Problem” blasted through an iPhone behind the net as Maryland prepared for its midweek contest against Towson on May 3. Third baseman AJ Lee moved toward the cage for pregame batting practice, smiling after hearing his walk-up song.

“What does it say there?” Vaughn asked as the chorus started.

“Watch that arm coach, it’s coming in hot.” Then came another line drive. “That’s a good swing,” he said.

Dunn then prepared for his at-bats, sporting a white arm sleeve.

“I like when Dunn adds a little bit of swag to his game,” Vaughn joked.

Vaughn keeps the attitude light during batting practice. Against the Tigers, Lee rewarded that approach.

Trailing by a run in the eighth, Lee crushed a ball over the wall in left field to give Maryland a lead it wouldn’t relinquish.

“I can’t tell you enough good things about the guy,” Szefc said. “He’s as good as they come.”