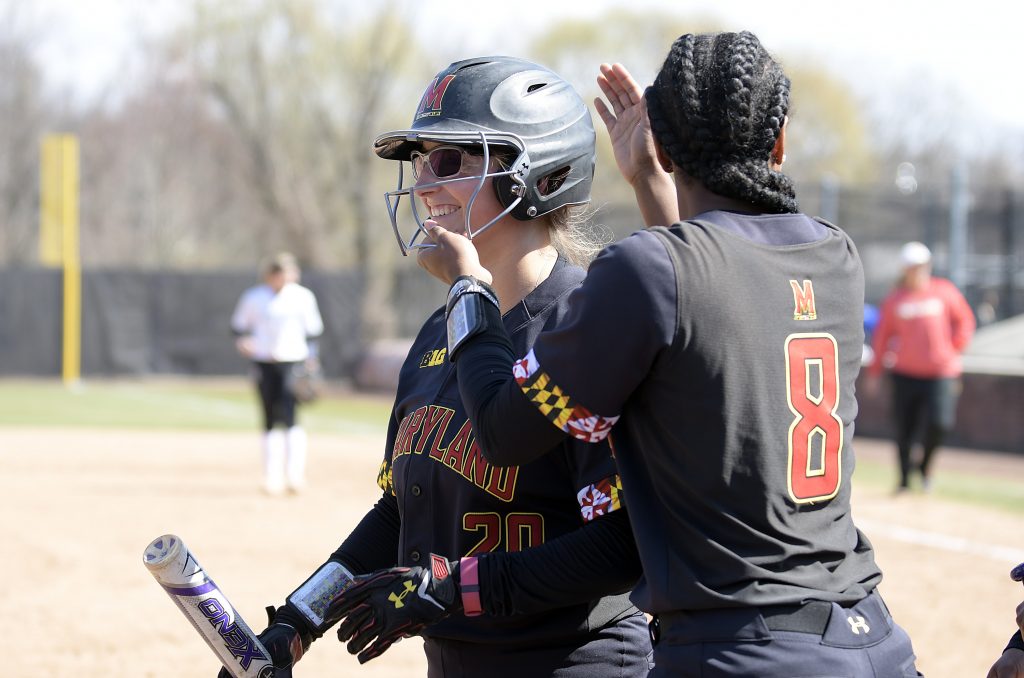 The Michigan Wolverines play against the Wisconsin Badgers during the Championship game of the Men's Big Ten Tournament at Verizon Center on March 12, 2017 in Washington, DC.

Outfielder Kassidy Cross trudged to the plate with two outs, the bases loaded and a tie game in the bottom of the seventh. The then-Northern High School freshman dug into the batter’s box with the state semifinal against River Hill on the line. The Patriots’ five-year Maryland 3A Title run was in the hands of a rookie.

Cross sent a walk-off RBI single into right field to break the scoreless tie and move Northern into the state finals. The Patriots then defeated Eastern Technical at Maryland Softball Stadium, winning the first of three state championships Cross was a part of.

Cross never lost a game at the Maryland softball team’s field before college, winning three state championships with Northern there. Despite being a two-time Calvert County Player of the Year and a 2016 first-team All-Met selection, Cross was a walk-on recruit. She continues a family legacy at the University of Maryland, started by her dad, David Cross, a former baseball walk-on.

Because she didn’t earn a scholarship, Kassidy Cross has a drive to prove herself. Since arriving in College Park from Northern, she’s established herself as the Terps’ starting center fielder.

“I’ve played against good people, and now I’m going to get to play against better people,” Cross thought when entering college. “I just wanted the challenge.”

The twins, Kassidy and Kaylee Cross, looked so alike it was hard to distinguish who was pitching and who was catching. But the duo won the state championship — the first of many in their careers — with their dad as the coach.

For Northern and the Bayside Blues, their travel team, the twins met at the pitcher’s mound and completed a handshake before every game. They first shook hands traditionally and then added fist bumps and a snap of their fingers.

The handshake was passed down through the family, originating with her dad and her grandpa.

“They were like two peas in a pod,” her dad said. “Kaylee wouldn’t start pitching until they did that.”

The Cross twins were about 6 when they first attended a camp run by former Maryland player and assistant coach Jillian Callaway. Throughout the years, the pair took hitting and pitching lessons.

Callaway noticed the girls were talented right away, calling them spitfires.

“They constantly wanted to win,” Callaway said. “Often it was the biggest battle between each other.”

Kassidy and Kaylee Cross played on every team together until college. Kassidy Cross walked on at Maryland while Kaylee Cross accepted a scholarship at Mount St. Mary’s. Before separating, they did everything together, from wearing each other’s clothes to getting into occasional fights.

Mount St. Mary’s played a doubleheader against Howard on April 26. After practice and study hall, Kassidy Cross’ mom drove her to her sister’s game. When the pair saw each other, they ran toward each other and hugged. Then, Cross taped each of her sister’s at-bats.

“It’s really fulfilling to see her succeed without me, because we had so much success together,” Cross said. “I just enjoyed the fact we can still enjoy the game without each other.”

Cross and her friend, Natalie LaPlaca, were the only freshmen to make the Northern varsity team. At a practice early in the season, her coach, Robert Radford, told the team if the newcomers didn’t get their bunts down in fair territory, the rest of the squad would run until they did.

“But thankfully, we got them both down,” Cross said. “He was willing to put the pressure on us, and we were able to rise to the challenge.”

Cross joined the team without expectations. She didn’t know if she would play, or even make cuts.

But she played all 23 games, hit .519 and scored 34 runs from the leadoff spot, both team highs. The Patriots went undefeated and won their sixth straight state championship.

Cross and her sister helped Northern to state championships in their sophomore and junior years, too. Radford, now an assistant coach at Catholic University, laid the groundwork before them. He scheduled games against teams from different states to find the highest competition.

Of all the championships, Cross’ junior year stands out the most. After she hit a leadoff double, she swiped third base and scored the first run of the game. But in the bottom half of the first, her sister allowed four runs to C. Milton Wright.

Northern was able to bounce back, though. Kaylee Cross pitched six scoreless frames and the Patriots added eight unanswered runs in the final three innings to clinch their eighth straight state championship.

“There’s just a lot of pressure on you to keep the streak alive,” Cross’ dad said. “They just didn’t want to be the group that got there and didn’t finish it.”

Northern has a lineage of softball players at Maryland. Beth Radford, the former Northern coach’s daughter, played at Maryland, and Lindsey and Kaitlyn Schmeiser competed at the school. Cross grew up watching them play at Northern, and they also played in her travel ball league.

During Callaway’s second stint as a Maryland assistant coach, she held a camp at the university, which the Cross twins attended. It put them on the radar of then-coach Laura Watten as freshmen. Amid coaching turnovers, Cross remained on the Terps’ radar.

When coach Julie Wright took the helm in 2015, she reached out to Cross to assure her the offer would be honored.

Cross’ dad hadn’t watched a game at Bob “Turtle” Smith Stadium since he played his final baseball game there in 1984. After Cross’ softball game finished against Ohio State in March, the freshman proposed the pair attend the Terps’ baseball game against Michigan.

The trip to the stadium allowed her dad to see how much the venue had changed since his last visit, and it served as further bonding experience between the former and current players.

They related experiences with college ball, including what it’s like to be a walk-on, how to balance school and their experiences traveling.

“You couldn’t be equal to a scholarship player, you always had to be a tad bit better,” her dad said. “And in the end that kind of gave her a chip on her shoulder to work hard.”

Hearing the stories of her dad’s experiences made Cross want to play in college.

“He always told me to work hard,” Cross said, “and the chips will fall in their place.”

Cross attended a Maryland softball camp in July. She was primed to play for the team, and was “here and doing nothing,” so she participated.

Other players were impressed with her performance and asked if she was playing in college.

After her sophomore year state title with Northern, Cross posted a photo at the Maryland Softball Stadium on Instagram with the caption, “Maybe I’ll go somewhere with this.”

But she never thought she would stand on that field as a Division-I contributor.

After playing in the summer camp, it hit her that she would continue a family legacy at Maryland. She wanted to prove herself for the fall season, knowing she had a decent chance at earning playtime with only two returning outfielders.

So, during the summer she made the trip to College Park frequently to work out, and she developed a bond with assistant coach Lisa Carey. The pair worked on hitting and Cross learned specific drills to use. The whole family got on board with the idea that as a freshman, she had to be just a little bit better to earn playing time. But she wanted the challenge of playing higher competition.

Since then, she’s started 39 of Maryland’s 48 games this season, and her .362 on-base percentage is the second-highest on the team. She came to College Park with memories at Maryland, but she’s made new ones since. Against Ohio State in March, she made two diving catches in center field, igniting flashbacks of her time as a high school star.