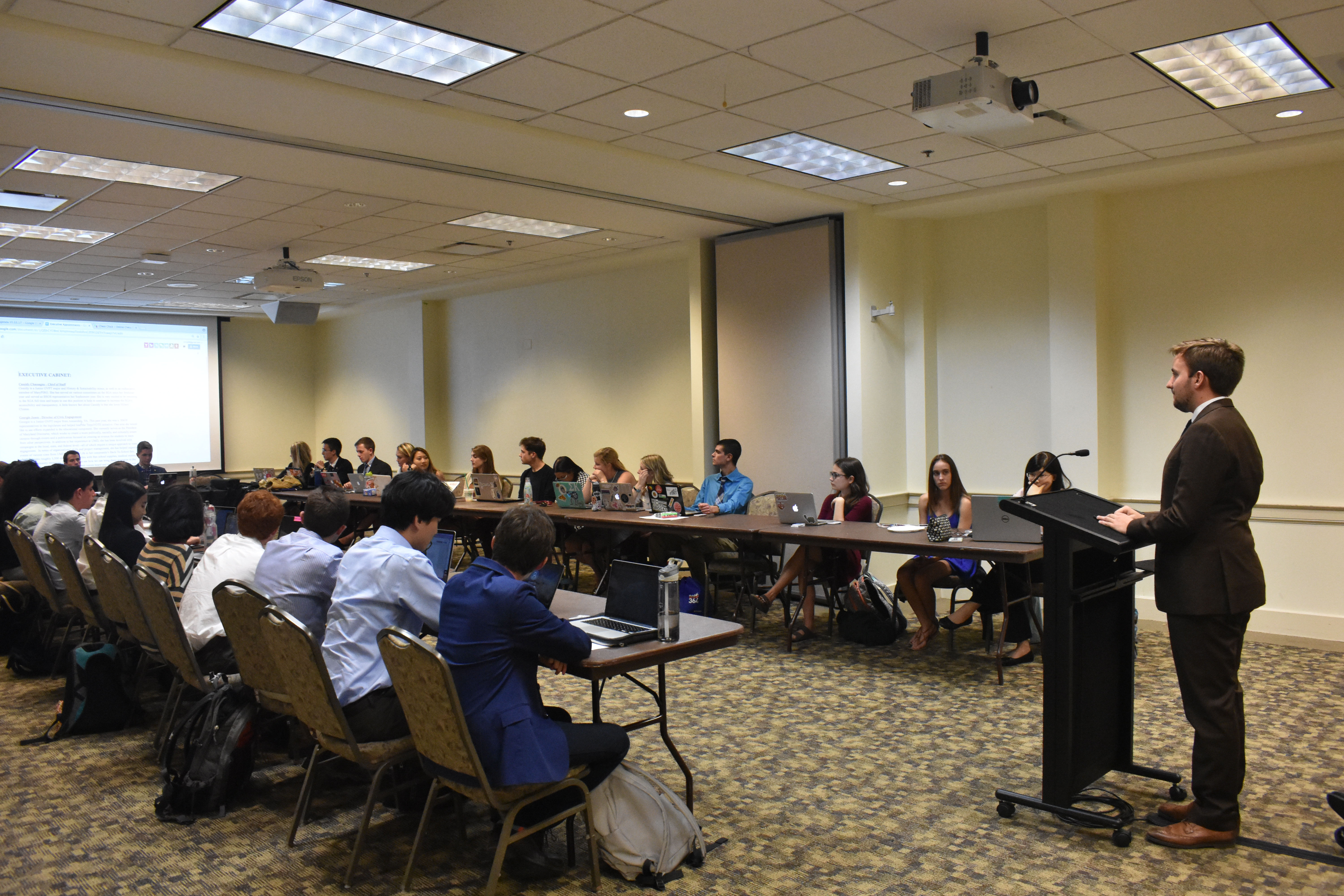 The SGA executive cabinet and other newly appointed members discussed initiatives they plan to take to improve the student government during the organization’s first meeting of the 2017-18 legislative session Wednesday night.

The legislature confirmed executive, finance and legislative positions. Nine of the 15 executive appointees are incumbents.

Leah Barteldes, the behavioral and social sciences representative and a sophomore government and politics major, was elected speaker pro tempore. Former undergraduate studies representative Jonathan Allen was elected speaker of the legislature. Kiely Duffy, who served as the coordinator of recruitment and retention this past year, will be the director of shared governance for the upcoming year.

Allen attempted to eliminate the position at the organization’s omnibus meeting last week because its duties, such as forming connections with student organizations, were repetitive, he said. Katherine Swanson, former Student Government Association president, said the position “needs to be in the hands of the right person” to be effective.

In addressing concerns about her new position, Duffy said she plans to start networking with on-campus organizations as soon as possible.

“I plan to hit the ground running,” said Duffy, a sophomore government and politics major. “A huge goal of mine is to strengthen our relationship with the [University] Senate … to actually make a difference on this campus.”

The legislature confirmed Georgie Jones, a junior government and politics major, as the director of civic engagement for next academic year, a position that was added to the bylaws at the omnibus meeting. Jones served as the behavioral and social sciences representative this past year, and she helped lead the Terps Vote initiative to encourage students to register to vote in the national election.

“While it’s not exactly a national election year, it’s still always election year,” Jones said. “It’s about building understanding that it’s more than just a name on a ticket, but that there’s a policy idea behind that.”

Jones hopes to draw upon her experience working for campaigns at local, state and national levels “to help students make their voices heard” and to strengthen the relationship between the University of Maryland and College Park, according to an SGA document.

Huw Ball, a sophomore business analytics and information systems and operations management major, was confirmed to return as director of student groups. When legislative members raised concerns about the lack of transparency with rules for student groups to become recognized by the SGA, Ball said he would work to make both information and the organization itself more accessible to student groups.

“I want to go to the [general body meeting] of other groups and talk to them about SGA recognition and do a presentation about what SGA is doing,” Ball said. “If you go to a student group of 50 people, that’s 50 people who have never heard about SGA and what they’re doing.”

Alia Abdelkader, vice president of finance, appointed seven members to serve on the financial affairs committee. All appointees previously served on the committee, according to an SGA document.

Abdelkader, a junior operations management and information systems major, said she is looking forward to the committee bringing back transparency by monitoring how student groups spend SGA allocated funds.

“It’s something that used to be really important to us that has fallen by the wayside,” Abdelkader said, noting the organization’s audit and review committee will “conduct audits of the student group account of every SGA recognized group to ensure that funds are being spent in a way that is fair, equitable and providing the most value to the campus community.”

The legislature elected Julianne Heberlein, the journalism representative, to be the recruitment and retention coordinator. Heberlein said she is dedicated to reaching out to more communities by canvasing year-round.

“It’s really important to not only canvas during campaign season, but also year round because what the student body has to say is really important,” said Heberlein,, a freshman government and politics and journalism major. “Face-to-face interaction is really important, and I think that’s what people will respond to better than flyers on a door or on social media because some people just scroll past it.”